A weak prophylactic against aerial attack 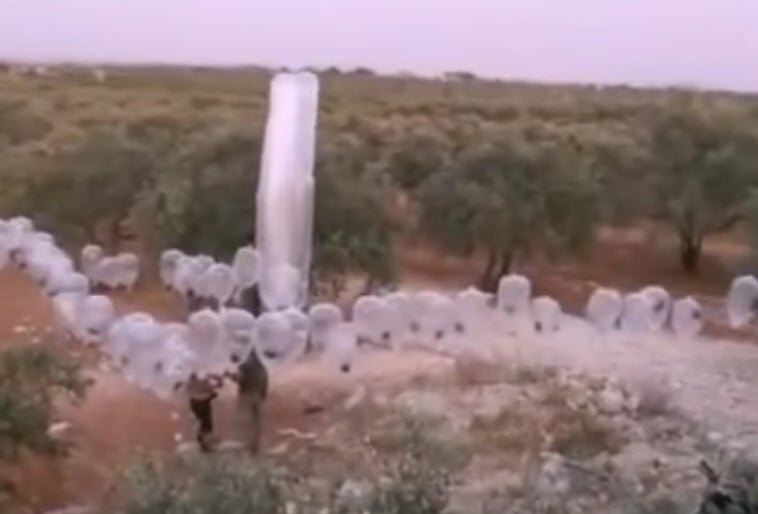 Condoms are very effective at preventing transmission of STI’s, but can they also be used as an effective weapon against aircraft? In a video, a group of what appears to be militants fill condoms with air and then attach bombs to them, in an attempt to create a defense against airplanes. With the Syrian government, an American-led coalition, and Russian planes all bombing targets in Syria, there are a lot of air forces for militants to defend against. This is what their condom bombs look like:

The condoms-turned-into-balloons appear to be filled with a lighter-than-air gas, and have small satchels of explosives tied to their ends. Released into the wind and carried into the sky, their transparent bodies almost disappear, which is probably the one advantage they have as an anti-air weapon. In the video itself, we see one balloon explode prematurely, and even without that the balloons aren’t a controlled weapon.

This is hardly the first use of balloons in war, though it may be one of the first uses of condoms-as-balloons in a conflict. In World War II, Japan launched thousands of bomb-carrying balloons into the jet stream to attack America, killing a total of six Americans in the continental United States. Thousands of these bombs remain lost and unaccounted for. In World War II, countries flew giant tethered barrage balloons, whose giant steel cables kept enemy aircraft away from low altitudes. Used in conjunction with anti-aircraft guns and fighter squadrons, barrage balloons provided part of a defense against aerial attack, but hardly a whole solution by themselves. It’s likely that these condom balloons in Syria will prove even less useful than their World War II predecessors.

The video was released by Russia Insider, a crowdfunded site designed to counter coverage of Russia that they feel is biased and inaccurate, specifically American and European media. In Russia Insider’s description of the video, it claims the militants are part of ISIS, the violent fundamentalist group currently carving out a state in eastern Syria and western Iraq. Yet the video description also claims this was filmed outside Idlib, which is under the control of Jabhat al-Nusra and its allies, none of whom are ISIS.

The skies above Syria are so crowded with aircraft that Russian pilots can film American drones. For militants on the ground, aerial attacks can come from either the Syrian government, an American-led anti-ISIS coalition, or Russian planes. Russia has been a long-time supporter of the Assad government in Syria, which is fighting against ISIS, Jabhat al-Nusra, and other factions in the country’s ongoing civil war. Recently, Russian forces arrived in Syria to bolster the regime, with the Russian Ministry of Defense even selling “Support Assad” T-shirts. While claiming to join the American fight against ISIS, the overwhelming majority of Russian airstrikes in Syria have been against non-ISIS groups.