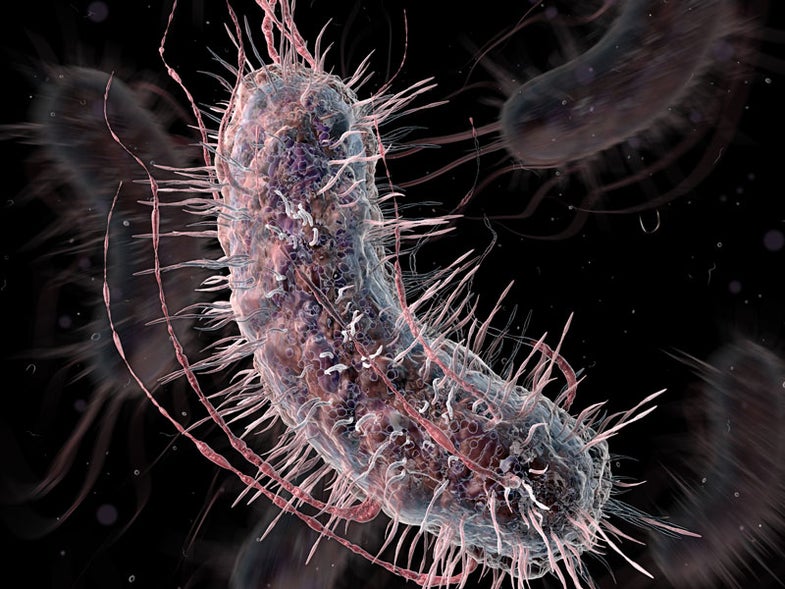 A team of Harvard Medical School scientists, which includes genetics professor George Church, have designed a bacterial genome that has been rewritten on a massive scale, with changes in more than 62,000 spots.

They haven’t used it to make living E. coli yet, but the findings, reported today in Science, mark progress towards genetically engineered bacteria that could make new materials without risk of exchanging genes with organisms in the wild.

“It’s an important step forward for demonstrating the malleability of the genetic code and how entirely new types of biological functions and properties can be extracted from organisms through genomes that have been recoded,” Farren Isaacs of Yale University, who has worked with the team in the past, told Nature.

This new kind of genetic engineering changes an organism’s own DNA. Called recoding, it is meant to be safer than traditional genetic engineering because it can’t spread outside the lab; the altered genetic code is too different for unmodified organisms to read.

Scientists hope that genetically recoded bacteria will be able to assemble new types of proteins that could be used in medicines. Recoded bacteria could also resist infections that might hamper large-scale operations, such as growing biofuel-making bacteria. In earlier experiments, the team modified E. coli to become more resilient against a virus and make an amino acid not found in nature.

Our DNA and RNA is made of different “letters” called nucleotides. These letters combine in groups of three to forms “words” called codons. Codons are translated into different amino acids, the building blocks for proteins (a few codons serve as stop signals instead, instructing protein-building machinery to wrap it up). Most organisms use 64 codons, but they are a bit redundant; multiple codons can correspond to the same amino acid.

In the earlier work, the scientists tinkered with only a single codon. Now, the team has tried to cut down the number of codons E. coli uses from 64 to 57. They chose seven codons, then designed a genome in which all 62,214 of their appearances were swapped for other codons and synthesized its DNA in 55 fragments.

The team is now testing how the recoded fragments function when slipped into living E. coli. Once it’s finished, the upgraded E. coli will be able to use up to four new amino acids to make proteins.