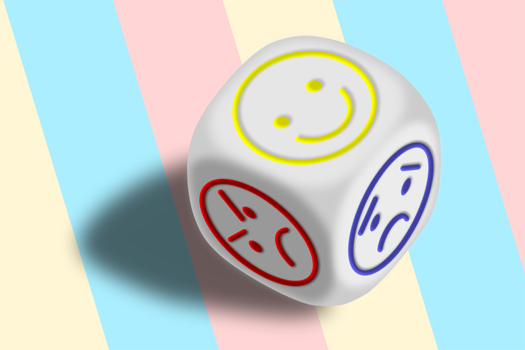 If you pick up a British book, a few cultural differences might easily differentiate it from a member of the American canon — a penchant for spelling words with an extra “u,” an unfamiliar slang word…and perhaps the literary equivalent of a stiff upper lip. According to new research, over the last half a century, American writing has shown a significant uptick in emotional words compared books written by our friends across the pond.

A study published in PLOS ONE this week examined books from the last century in Google’s Ngram Viewer, a database that visualizes the frequency of certain keywords in more than 5 million tomes, and found that since the mid-century, American and British word usage has diverged.

Tracing the usage of words that convey six moods (joy, surprise, anger, sadness, fear, disgust), the authors found that in general, words that indicate mood have decreased over time — except fear, a mood that has been enjoying a resurgence since the 1970s. Usage of words that indicate positive and negative emotions also corresponded to larger historical trends. There was an increase in joy during the roaring ’20s and the swinging ’60s, for example, but a drop toward sadness in during World War II. 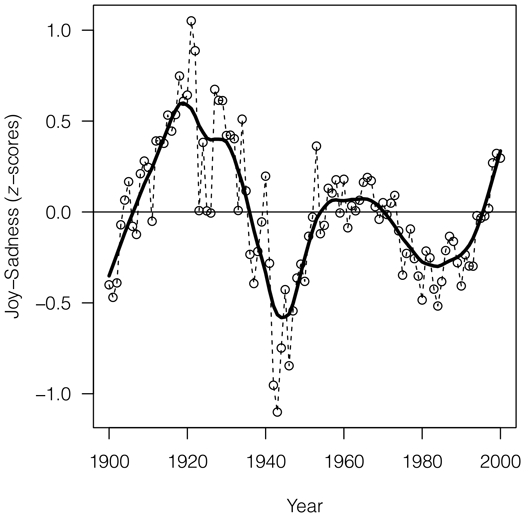 During the first half of the 20th century, British books were similar in emotional content — or even a little more emotional — than American books. But since 1960, American literature has had more and more emotional “mood” content than their British counterparts. The same trend was found in American and English usage of content-free words like “and,” “but” and “the,” suggesting that a larger stylistic difference has emerged. 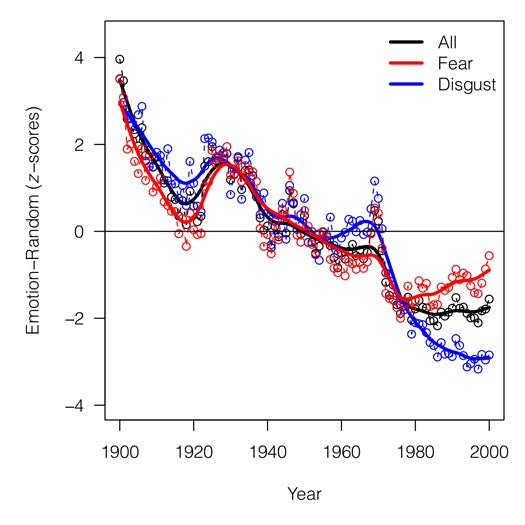 The decrease in emotional words used in fiction over time. Fear (red) had the highest final value, while disgust (blue) had the lowest.

In a statement from the University of Brisol, co-author Alex Bentley, a professor of archaeology and anthropology, explained one possible reason for the divergence:

We don’t know exactly what happened in the Sixties but our results show that this is the precise moment in which literary American and British English started to diverge.  We can only speculate whether this was connected, for example, to the baby-boom or to the rising of counterculture.

However, the authors write that while the study certainly reflects a trend in published language, it’s uncertain whether or not that trend is present in the population at large.

It has been suggested, for example, that it was the suppression of desire in ordinary Elizabethan English life that increased demand for writing “obsessed with romance and sex.” So while it is easy to conclude that Americans have themselves become more ’emotional’ over the past several decades, perhaps songs and books may not reflect the real population any more than catwalk models reflect the average body; the observed changes reflect the book market, rather than a direct change in American culture.

So it’s possible we’re not a complete emotional mess. We just want to read about people who are.