The largest dinosaurs got huge way earlier than we thought

They lived on Pangea more than 200 million years ago. 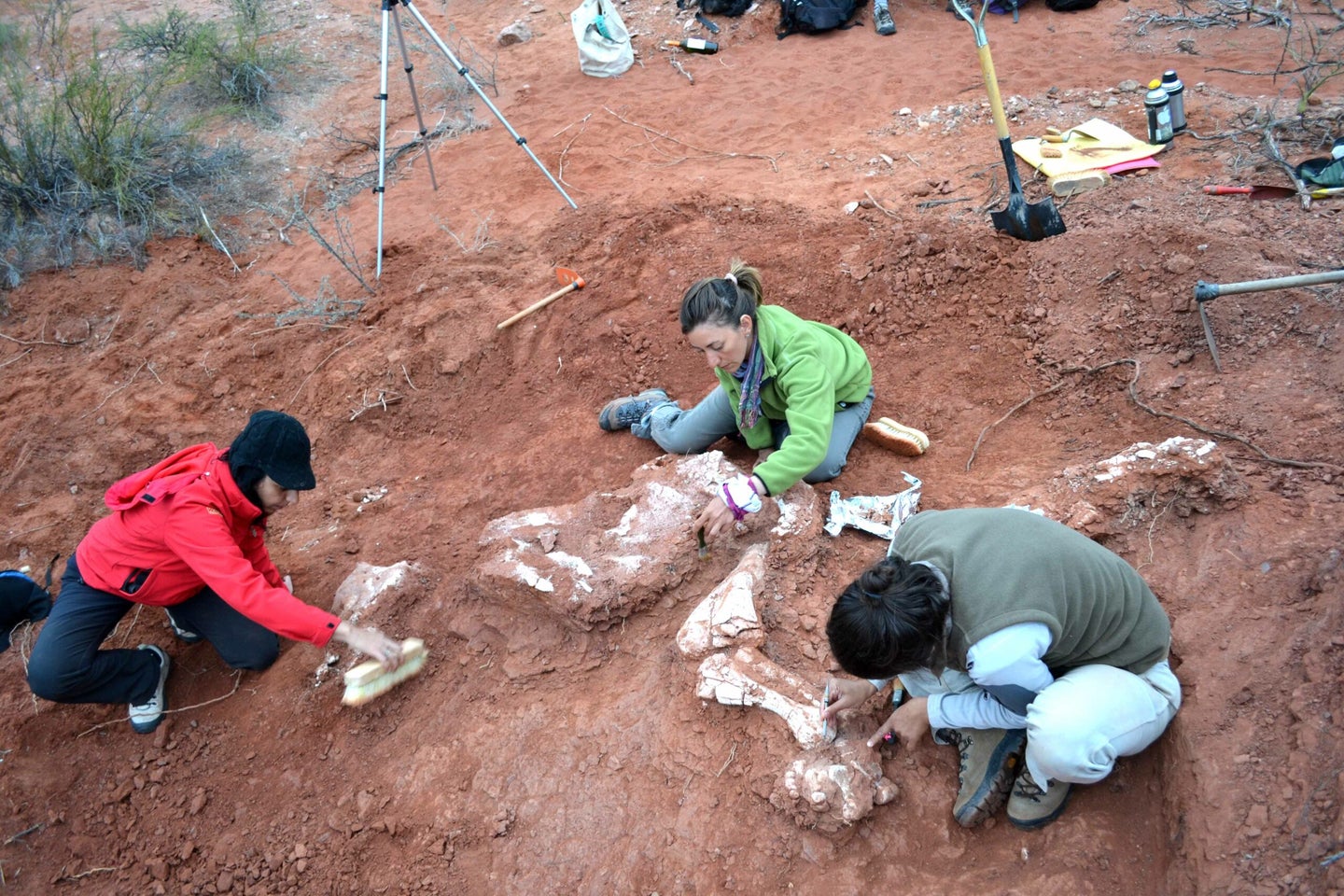 Listen, dinosaurs are the best. We can rhapsodize about raptors, roar over the latest T. Rex findings, and swoon over the feathers of Anchiornis. And we’ll forever treasure the titans, with their stretched-out, towering necks and tails; brontosaurus, titanosaurus, and the rest of the sauropods .

While the Blue Whale remains the overall heavyweight champ, those sauropod giants were the largest creatures to ever walk on land. But they didn’t just decide to bulk up one day. Their growth happened over a very long time, and may have started far earlier than researchers initially thought.

In a paper published in Nature Ecology & Evolution this week, paleontologists analyzed the fossilized remains of two species of dinosaur that lived in a corner of the supercontinent Pangea between 237 million and 201 million years ago. That’s nearly 30 million years before the giants you read about in science class lumbered onto the scene.

The fossils show that instead of cropping up in the Jurassic, the traits that defined sauropods arose earlier, showing that there was more than one way for these giants to develop. Some of these traits, such as a bird-like respiratory system, would be used by similar dinosaurs 30 million years later.

“This system is related to the developed of air sacs inside their bodies—like modern birds—which allow them to have large reserves of oxygenated air, also helped them to keep their bodies cool despite its large size,” says study author Cecilia Apaldetti. “In addition, this kind of breathing implied the presence of cavities (deep holes) in their bones—pneumatic skeleton—that lightened the weight and would have favored it to acquire a large body sizes.”

Cecilia Apaldetti is a researcher in the Museo de Ciencias Naturales, Universidad Nacional de San Juan in Argentina. She got involved as a post-doctoral researcher and started studying a species (Lessemsaurus) that had already been described in the scientific literature, but whose bones were twice as large as expected.

Then, in 2015, she and her colleagues came across a partial skeleton of a species that hadn’t been described before. “This new dinosaur changes our understanding of how dinosaurs became giants,” Apaldetti says in an e-mail. “We didn’t expect a big dinosaur in the Triassic because we know that at that moment dinosaurs were in general small, no more than 3 tons. But this skeleton was more than that.”

Apaldetti says that until now, it was believed that sauropods had evolved in the Jurassic, around 180 million years ago. “Hhowever with this discovery we can see that the first steps toward gigantism occurred during Triassic,” Apaldetti says—many millions of years before these iconic long-necked creatures spread across the world.

It took months to clean the dirt and rock accumulated over eons from the bones, but when they did they were left with a brand-new species, Ingentia prima, which—along with Antetonitrus, a dino from South Africa, and Lessemsaurus—had some unique features. They had vertebrae with air spaces (pneumatic vertebrae—a feature that showed up again in their successors) and an accelerated growth pattern, where they’d grow quickly every year, building up signs of the spurts in their bones like rings in a tree.

“Typically in dinosaurs, that type of “squiggly” plexiform bone is only seen in very young individuals that are growing rapidly. As dinosaurs grow up, their grow rate slows and the bone texture is more linear and organized. The lessemsaurid histology shows that even though they had an annual slowdown in growth (presumably in winter), they were still gaining size rapidly in the good seasons year after year,” Elizabeth Freedman Fowler, a paleontologist who was not involved in the study, said in an email from a field site in Montana.

“Sauropods are of course the size champions, and this study shows how the earliest sauropods reached larger than expected sizes, by growing very fast and keeping that high growth rate year after year. If you want to get big, you can grow really quickly, or you can grow slowly for many years, or some combination of the two. Most groups of dinosaurs lean toward the ‘grow fast and die young’ strategy,” Fowler says.

The reason that the trend toward gigantism may have developed over those millions of years is that it’s one way for plant-eaters like these sauropods to stay safe in a harsh world.

“Gigantism is an evolutionary survival strategy, especially for herbivorous animals, because size is a form of defense against predators. Like any [herbivore], it surely ran the risk of being predated!” Apaldetti says. At the time, Apaldetti notes, there were massive carnivores related to crocodiles—only much larger—occupying the same area as these dinosaurs. Getting big could have encouraged these carnivores to go after prey more their own size. And that trait kept being advantageous for years.

There are still plenty of questions about how dinosaurs evolved, but this adds a big chunk of information to our understanding of how giants came to roam the Earth.

“This paper shows that we still have a lot to learn about the growth rate strategies of different groups of dinosaurs. If there’s one rule about dinosaurs, it’s that there is always something left to surprise us,” Fowler says.