This May Be The First Dinosaur Brain Ever Studied. What Can It Teach Us?

The new fossil is intriguing, but paleontologists have better ways of judging a dinosaur's smarts 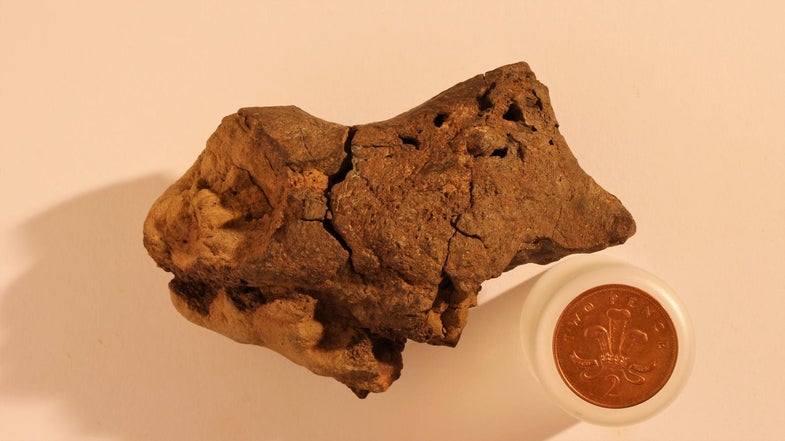 For the first time, paleontologists may have a fossilized dinosaur brain on their hands.

The small fossil, which resembles brain structures found in living birds and crocodilians, was spied by a collector on a beach in the United Kingdom in 2004. It likely belonged to a close relative of the Iguanodons, herbivorous dinosaurs that lived about 133 million years ago during the Early Cretaceous Period.

In a study published October 27 by the Geological Society of London, researchers report evidence of blood vessels and tough, brain-enveloping membranes called meninges inside the fossil. It’s possible—but less certain—that some scraps of mineralized tissue from the actual brain also lie within.

So what can the first-known fossilized dinosaur brain (or at least brain-adjacent membranes) tell us about how smart this dinosaur was? The scientists are wary of leaping to any conclusions.

But that doesn’t mean there’s nothing to be learned from the inside of a dinosaur’s skull.

“We used to think they were these dull witted, swamp-dwelling behemoths,” says Lawrence Witmer, a paleontologist at Ohio University in Athens who was not involved with the new work. This has given way to a more nuanced view that many dinosaurs were “fairly intelligent” and sometimes social animals, he says. “What we are now trying to do is see if we can paint a somewhat finer picture—if we can start to figure out which groups of dinosaurs had higher cognitive abilities.”

It’s rare for any soft tissue from a dinosaur to be preserved. “Brain tissue is definitely not something that any of us really expect to see in the fossil record,” Witmer says. “We are left to…eke out every little bit of information from the bony brain cavity that we can.”

So paleontologists examine endocasts—models of the inside of the head. Some of these formed naturally when sand and mud flowed into openings of the skull. Others were crafted out of rubber, silicone or plaster by paleontologists. “The skull bones basically act as a Jell-O mold,” Witmer says.

Nowadays, researchers use CT scanning to make virtual casts. These can be used to gauge the brain’s size and shape, and how it varied among different kinds of dinosaurs. Paleontologists can develop a rough measure of how smart dinosaurs might have been based on how bulky their brains were relative to their bodies. A dinosaur with a “big” brain for its body size might have had more advanced cognitive abilities, for instance.

However, unlike mammals and modern birds, many dinosaurs did not fill up their brain cavities with neural tissue. “The resulting endocasts from these lineages are often lousy brain proxies,” Ashley Morhardt, a paleobiologist at Washington University in St. Louis, said in an email.

Witmer, Morhardt and their colleagues have been developing a technique to squeeze more accurate information out of endocasts by approximating not only the total brain size, but also the relative sizes of different brain regions. “The size of the brain, that obviously matters, but how your brain is organized is even more important,” Witmer says.

The team has examined how soft tissues like blood vessels and nerves are placed in present-day birds and crocodilians, their relationship with brain regions and the markers they leave in the surrounding skull bones. Called gross anatomical brain region approximation (GABRA), their new technique involves searching for these signatures on dinosaur endocasts and using them to map different areas in the brain.

What makes a dinosaur “smart”?

Revealing which of a dinosaur’s brain areas became larger over time can shed light on its cognition. “Intelligence itself is a slippery concept,” Witmer says. Researchers instead focus on cognitive abilities such as learning and being able to respond to unusual situations or investigate the environment. “We can look at these dinosaurs and see some that we think you might actually call clever, and others probably not so much.”

Predatory animals are often cunning, as they must be able to chase down moving prey and outwit dinner’s evasive maneuvers. They tend to be good at pulling together sights, sounds, and smells and leaping into action. True to form, “There’s a tremendous increase in the size of the higher brain center—the cerebrum—in the line leading up to birds,” Witmer says. This group of predatory dinosaurs, called theropods, includes such celebrated members as Velociraptor and Tyrannosaurus.

At the other end of the scale are the long-necked sauropod dinosaurs, a plant-eating group that includes Diplodocus and Apatosaurus. “We’ve looked at brain evolution in a large number of these animals and their brains tend to stay shockingly small, suggesting that their cognitive abilities were very modest,” Witmer says. These enormous dinosaurs didn’t really need to be quick-witted, because they were larger than most predators and their food was not mobile.

Smaller herbivores dinosaurs, like Iguanodon and its relatives, are more difficult to investigate. “Some of the guys in the middle, it’s a little harder for us to judge where they sit on that cognitive spectrum,” Witmer says.

Some cognitive skills are particularly difficult to gauge, such as those underpinning complicated social behavior. Some dinosaurs may have grouped together and enjoyed the safety in numbers, but this is not the same as cooperation. “Social animals will often be communicating information to each other rather than just being one among many,” Witmer says.

For predators, this can mean working together to drive prey towards their companions. “What they’re counting on as being part of a social group is that they will feed later,” Witmer says. “Communal hunting just means a whole bunch of animals are ganging up on a single prey animal.”

Evidence left by living dinosaurs can offer some limited clues to their cognition, although “kill sites,” where hunting may have taken place, are rare and controversial.

For herbivorous dinosaurs, this evidence can include footprints showing that young, vulnerable dinosaurs were kept shielded in the center of a herd. “These are the kinds of behaviors that we would consider social behavior as opposed to animals that are all just in it for themselves,” Witmer says.

Paleontologists are still figuring out how to bring together the evidence endocasts offer about brain structure with that from traces left in the fossil record by living dinosaurs. “People hadn’t given much weight to…footprints or nests, but now we’re recognizing that those are really important and are sort of separate pieces of the story that we need to have,” Witmer says.

The newly reported fossil has one particularly intriguing feature: the neural tissue appears to have been pressed up against the brain cavity. This could indicate that the dinosaur had lots of tissue packed into its skull, meaning it had a larger brain and might have been more intelligent than has been suspected.

But it’s likely that the tissue just appears this way because the dinosaur decayed upside-down. Over time, gravity tugged the brain down until it collapsed into the top of the “bowl-like” brain case, the researchers report. They do think the dinosaur was probably at least as smart as modern-day crocodilians, however.

“It’s entirely possible that dinosaurs had bigger brains than we give them credit for, but we can’t tell from this specimen alone,” coauthor David Norman of the University of Cambridge said in a statement.

So this fossil can’t reveal much about its owner’s intellect, or that of other dinosaurs. But it might lead paleontologists to find other exceptional cases of preserved soft tissue.

Normally, the contents of a dinosaur’s skull are among the first parts of its body to decompose. The Iguanodon-like fossil seems to have mineralized under special circumstances. As the animal decayed, its head may have been buried in the sediment at the bottom of a stagnant pond or swamp, where the neural tissue was “pickled” in the low-oxygen, highly acidic conditions.

“If we can look at…other rocks that might have had similar geochemistry, then maybe we might find other kinds of soft tissue preservation there,” Witmer says.