122 feet long and sure to be a classic 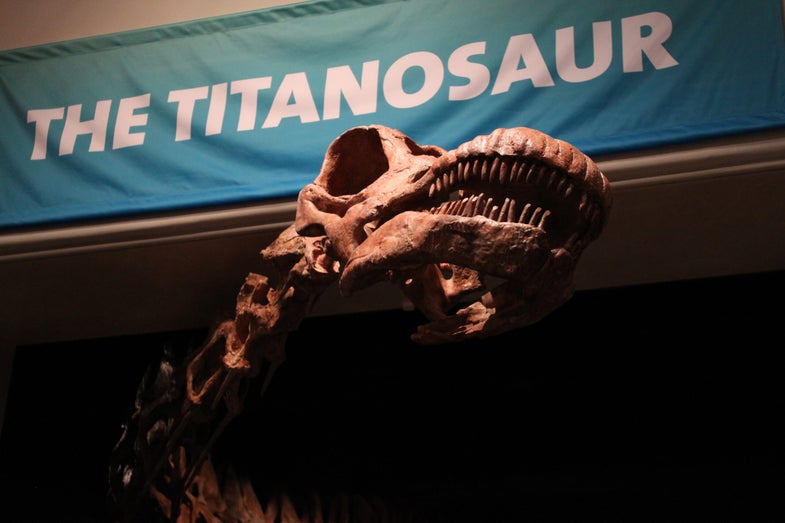 The titanosaur is so long that it's head reaches out the door, welcoming visitors into its hall. Grennan J. Milliken
SHARE

In the fossil halls of New York’s American Museum of Natural History, visitors take a journey through millennia of life on Earth. In each room, you walk among leviathans of bone. The iconic Tyrannosaurus rex and apatosaurus, followed by ancient mammals—Giant sloths, mastodons and many others. All hulking, all awe-inspiring. But on the fourth floor, starting today, resides a new resident that somehow makes all the others seem small by comparison: the titanosaur.

This specimen, so new it has yet to be named (Titanosaur is the family of dinosaurs it comes from), is one of the largest dinosaurs ever discovered, and one of the largest creatures ever to be displayed in the AMNH. The immense 122-foot-long cast of its skeleton is so long, in fact, that it can’t quite fit into the Ira D. Wallach Orientation Center in which it’s housed. Its head stretches out of the room, almost ten feet off the floor, cocked sideways and peering down upon all who enter with one eye and a big toothy grin. “Hospitably welcoming visitors,” said a smiling museum President Ellen V. Futter at a media preview yesterday.

The gigantic life-size cast is the end product of a journey begun in Argentina in 2014, when scientists there discovered an eight foot long femur weighing over a thousand pounds.

After a tipoff from a local rancher, Paleontologists Diego Pol and Jose Luis Carballido, of the Museo Paleontologico Egidio Feruglio (MEF), carefully excavated 200 fossilized bones from the arid landscape of Argentine Patagonia. The tedious process took several labor intensive expeditions over a period of 18 months to complete and even required partial removal of a hill. Bulldozers and trucks were employed in the removal of earth, hauling of thousand pound bones, and all the other brow wiping labor involved in paleontology. “We actually had to build a road to get there [to the site]” reflected Diego Pol, seated in front of the behemoth before journalists.

Dinosaurs are not lying in the ground in fully intact skeletons patiently waiting to be dug up, but are usually either just a few bony remains or a dizzying mass of bones in a disorganized pile. This dinosaur was discovered in the latter state. What Pol found was a melange of 200 some bones of multiple individuals. But, “For this animal, we have about 70 percent of the skeleton,” remarked Pol, which is most certainly not the norm in the field. 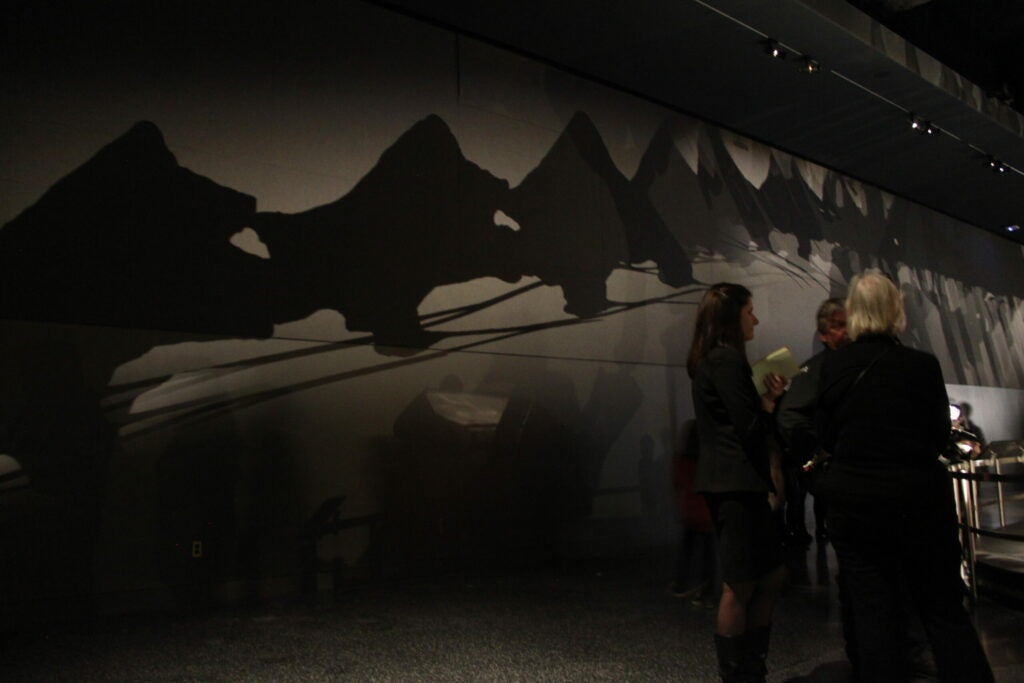 The titanosaur casts a long shadow in its dimly lit hall.

As surprising as it may seem, the 122-foot-long titanosaur was actually a juvenile. A 70-ton juvenile at that. This enormous animal was a sauropod, a type of herbivorous dinosaur with extraordinarily long necks and whiplike tails. Titanosaurs are the wider family of gigantic dinosaurs to which this oversized youth belonged.

Although it’s hard to say exactly how this creature lived its daily life, 100 million years ago in the Cretaceous period—much can be inferred from knowledge of other sauropods and existing giant herbivores like elephants. With its size, it’s likely that this titanosaur spent most of its day feeding. Lumbering around with its thick, swaying neck, it raked up tall growing vegetation with giant grinding teeth. Eye crossing numbers of calories would be needed to support a body of such size. “Maybe a thousand pounds of food a day. At least 500,” Mark Norell, Chair and Curator of the Paleontology Division at AMNH told Popular Science. “Elephants eat for 20 hours a day, and they eat plants that are probably more nutritious than the ones that existed when these dinosaurs did.” 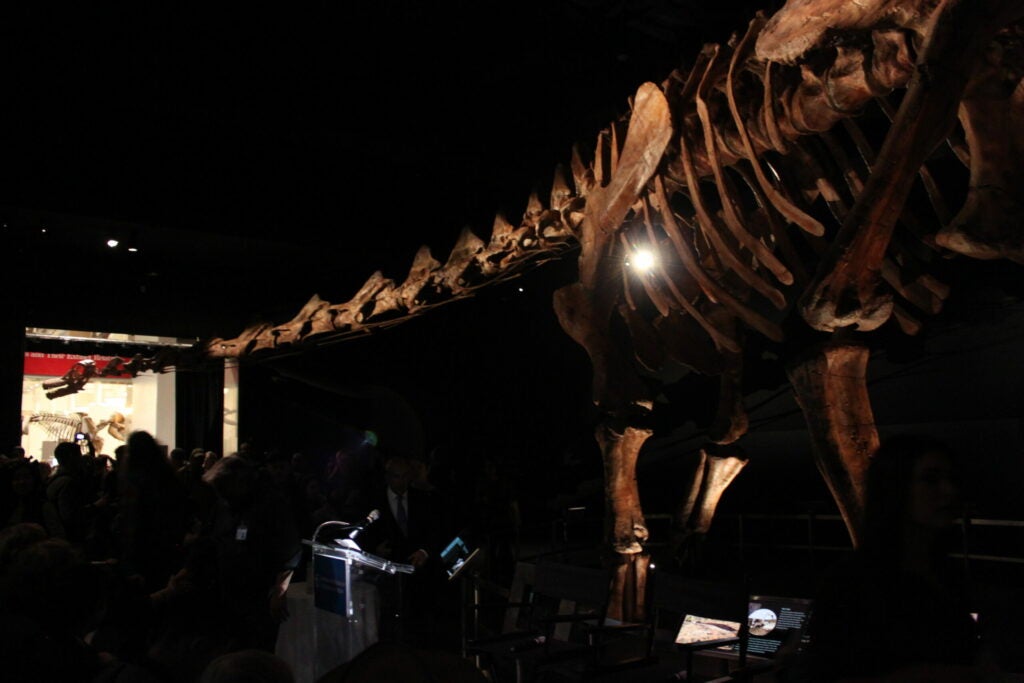 Paleontologists also have plenty of evidence that—like elephants—sauropods were social animals. This is found in the trackways, or fossilized footprints of these giants that reveal multiple individuals walking together back and forth, not in random patterns. Norell said that they can even tell by these trackways that “some other sauropod groups had structured herds—like elephants do—because you can see that the big adult ones were out in front, and the smaller juvenile ones were in the middle.”

The titanosaur at AMNH likely also roamed the forests of Cretaceous Patagonia in freedom from fear thanks to its immense size. “There were some predators which were about the size of T. Rex, but it’s doubtful that they would’ve had any predators,” said Norell. Standing with him next to the cast it’s easy to see why. Norell added ”only really rarely do you see African lions, which are apex predators in Africa, go after an adult elephant.” 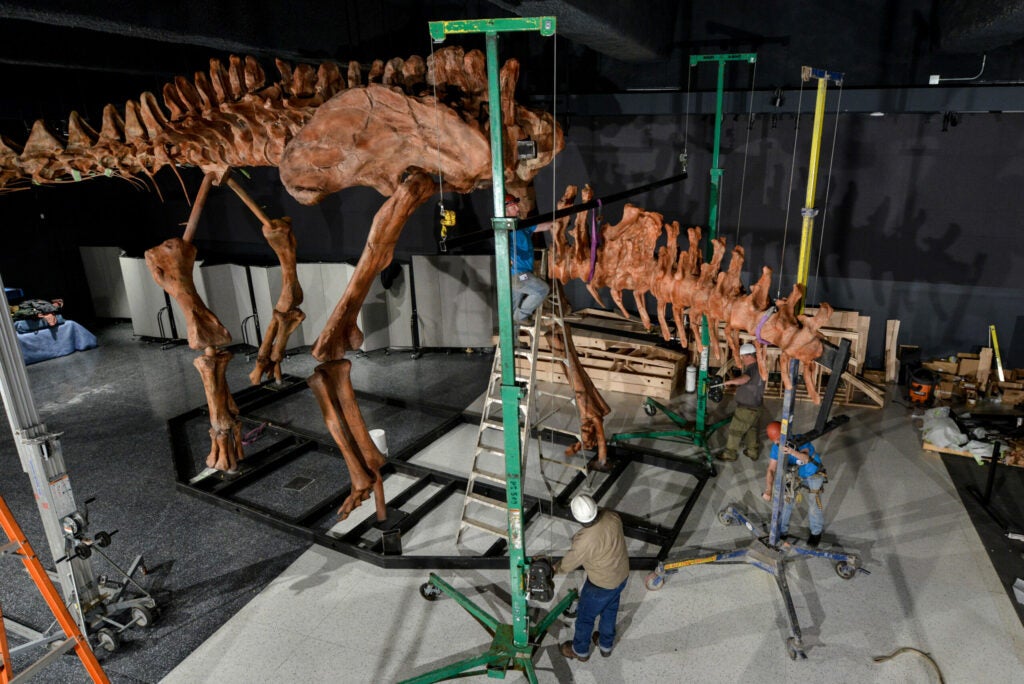 Before the fossil bones were even completely out of the ground, Peter May and his team from Research Casting International were down in Argentina taking 3D scans of them. “We scanned all the bones that they had—200 in all,” May told Popular Science. Back in Ontario at their workshop, the team of dinosaur builders, plugged that information into computers and 3D printed out fiberglass casts of the great bones. Or rather, printed some. The printer was actually too small for most of the bones “so the rest were done on the milling machine. 10′ by 6′ by 4′ deep. And we just carve away. Carve right down.” 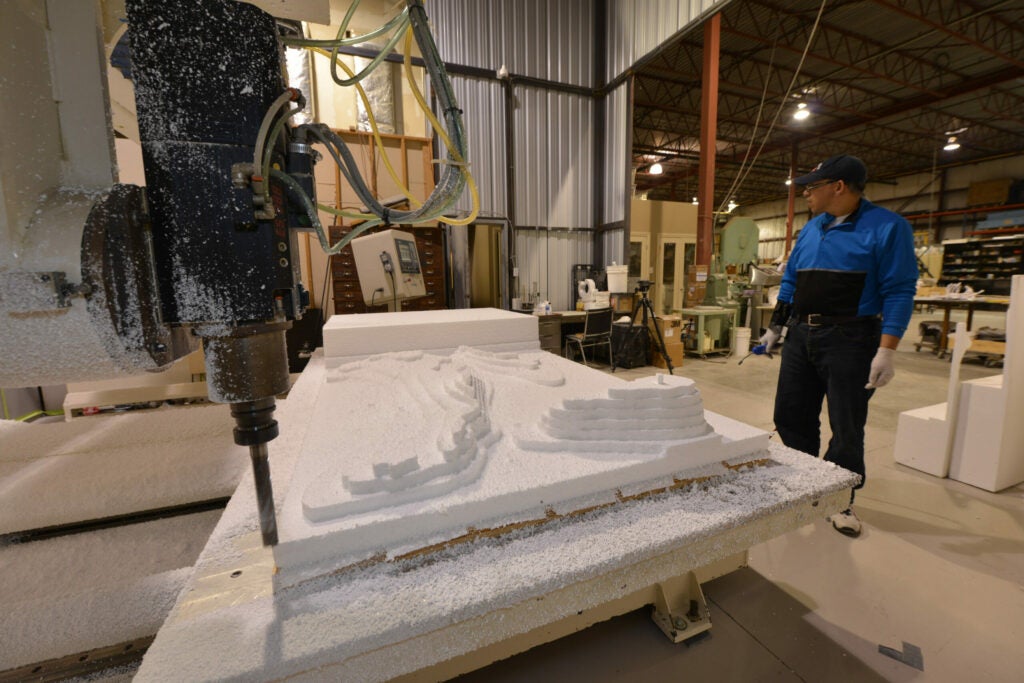 The life-sized skeleton on display doesn’t include any real fossils, which are far too heavy to mount. Instead, its bones are lightweight 3D prints made of fiberglass.

Once the hollow bones were fitted inside with rigid steel structures, assembling it in New York became just a matter of fastening the modular pieces together. But not without some sweating. Getting the young titanosaur to fit in the gallery took some finagling. “The ceiling [of the hall] is 19 feet 4 inches,” said May, gesturing to the hand sized vertebrae grazing the ceiling, “and the top of the dinosaur’s back is 19 feet 2 inches.” If the shoe fits.

Actual fossils aren’t included in the skeleton because their immense weight precludes them from being able to be mounted. As Norell explained, “The original femur weighs over a thousand pounds, this one weighs about 15.” But although the skeleton doesn’t contain any of the real fossils there are some on display, on loan from MEF in Argentina, including a prodigious eight foot tall femur. 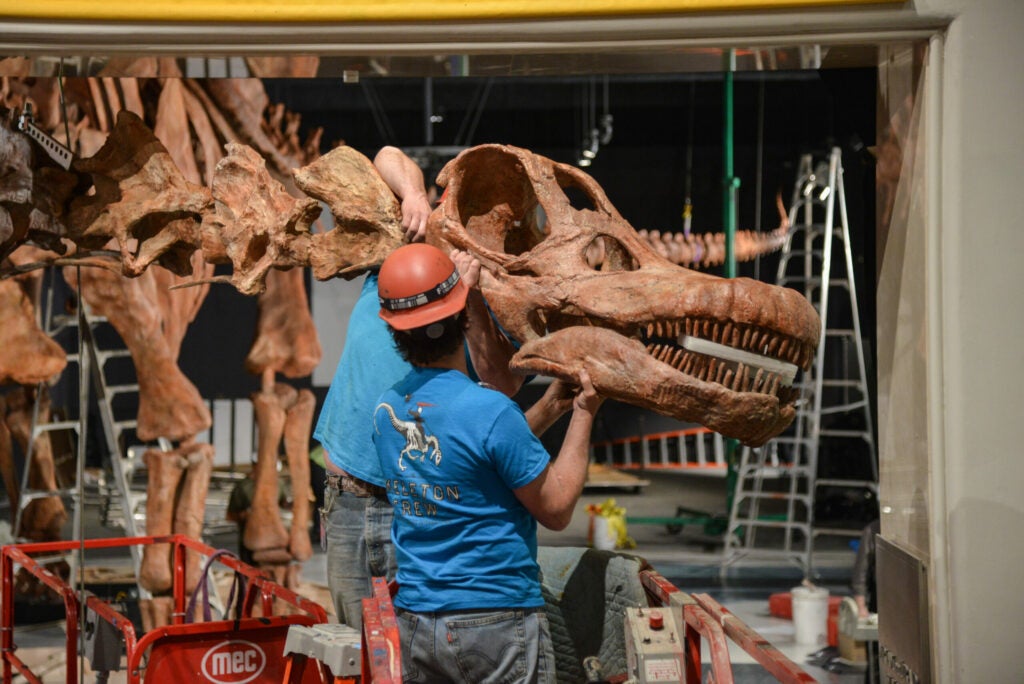 Standing beneath its towering structure of bones, you can imagine a herd of these titanosaurs trudging through the forests of Patagonia, with smaller creatures scurrying and flying out of their way. Sure to be an instant and icon of the American Museum of Natural History and the city of New York, the titanosaur embodies the lengthy strides of modern science and technology as well as the old fashioned thrill of discovery. As Michael Novacek, the Museum’s Senior Vice President and Provost for Science framed it for the media, “With all this technology, with all this new science…there’s nothing like finding a great new fossil. Especially a big one.”