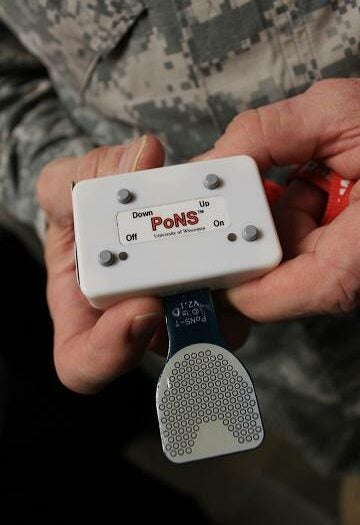 A new electronic device could treat brain damage by stimulating nerves on the tongue to send signals to the brain. The Portable NeuroModulation Stimulator, or PoNS, is named after part of the brain stem and aims to repair damaged neural connections.

Developed by NeuroHabilitation with funding from the U.S. Army, the battery-powered device is targeted at a specific type of damage called traumatic brain injury, which can cause long-term impairments to memory, coordination, and balance. More than 250,000 soldiers suffered traumatic brain injury between 2000 and 2012, according to the Pentagon.

Here’s how PoNS works: The user bites down on the device while performing a 20- or 30-minute series of physical and cognitive exercises tailored to the patient’s particular deficits. PoNS then stimulates nerve endings on the tongue in way that mirrors the exercises, hopefully allowing the brain to repair damaged neural connections. Doctors observed persistent patient improvement after a week of daily sessions with PoNS.

At a time when soldiers are likelier than ever to survive a battlefield injury, this tongue-to-brain device offers a glimpse at the kind of medical care veterans will need for decades to come.