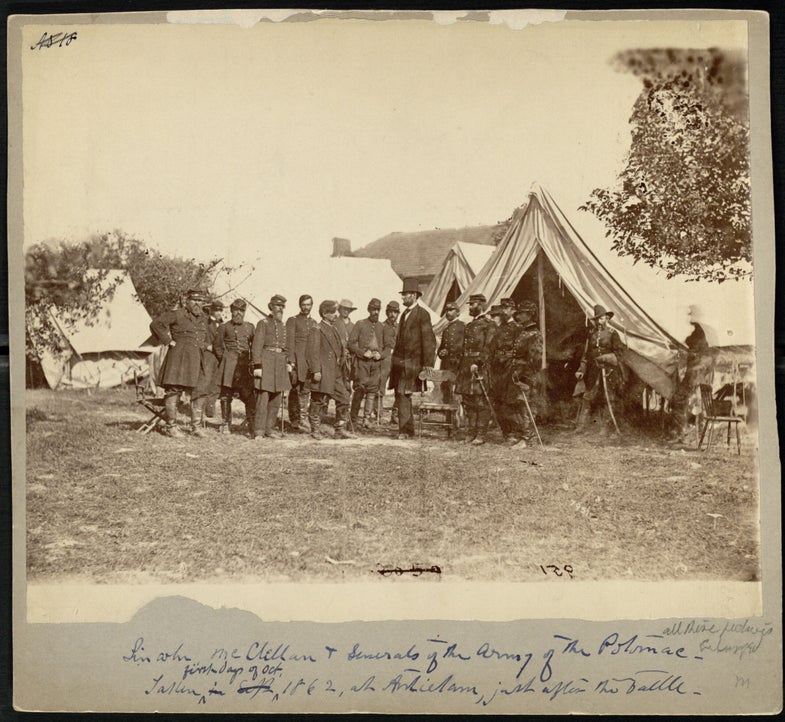 Taken October 3, 1862, this picture shows President Lincoln meeting with General George B. McClellan. Sharpsburg was the site of the battle better known as Antietam, where about 80,000 Union forces successfully defeated an army of about 40,000 Confederate forces. The battle halted Confederate General Robert E. Lee's invasion of Maryland, though the ever-cautious McClellan failed to pursue Lee's army. The battle was a Union victory, but an incomplete one. Eager to see McClellan continue the attack against his retreating foe, Lincoln met with the general to urge him forward. Frustrated by either McClellan's inability or refusal to do so, Lincoln would remove him from command just a month after this photograph was taken. the Truman H. Bartlett Collection at the Howard Gotlieb Archival Research Center at Boston University
SHARE

The Mugar Memorial Library at Boston University is hosting an exhibit of artifacts from the American Civil War. The show, up until the end of August, was designed to commemorate the 150th anniversary of the Emancipation Proclamation. For those of you who can’t make it to Boston in the next couple weeks, we’ve assembled a small sampling of items on display. They address a range of intriguing questions about the war, not least of which is this: Were Abraham Lincoln’s hands really that big? Yes, yes they were.