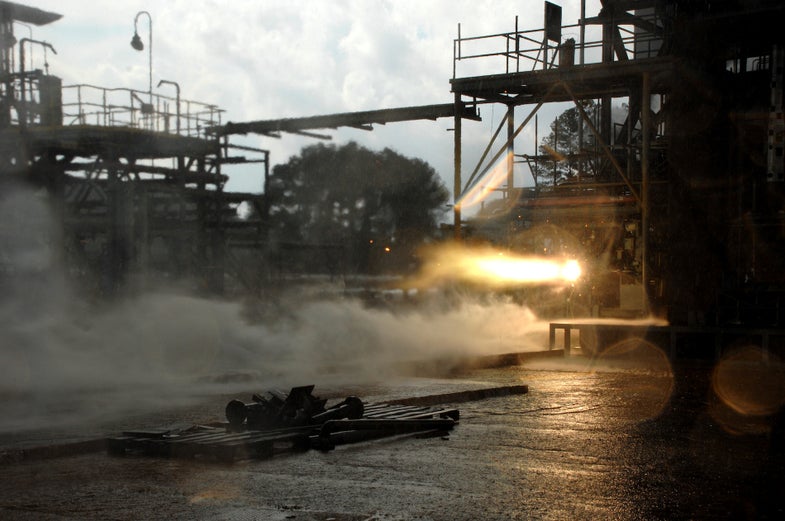 In NASA’s latest exploration of combining 3-D printing and space travel, the agency ran tests on the largest ever 3-D printed rocket engine component at the Marshall Space Flight Center.

The engine part was a complex subscale injector, similar in size to those that power small rocket engines. When an engine is firing, the injector delivers propellants, which provides power and thrust to get the rocket off the ground. NASA tested the component on August 22; it helped the engine generate a record 200,000 pounds of thrust. And the conditions were grueling, conducted at pressures of up to 1,400 pounds per square inch and at nearly 6,000 degrees Fahrenheit.

Working with NASA, a rapid prototyping company called Directed Manufacturing printed the rocket part using a process called selective laser melting, which creates 3-D objects by building up layers of nickel-chromium alloy powder. Whereas previous injector models have been made of 115 parts, this 3-D printed version is made of just two, which saves on cost. The production process also took much less time—under a month for 3-D printing, whereas traditional injectors sometimes take six months and cost twice as much.

NASA wanted to test a component that was complex and vital to the functioning of the rocket engine, as well as something that comes into direct contact with the extreme heat. It helps that the injector is also very similar to traditional versions that have undergone testing.

The agency says it is looking at 3-D printing as a way to quickly and cheaply replace engine parts for human missions to deep space, including to Mars and asteroids.

In July, NASA completed a successful test of a smaller 3-D printed rocket injector. The 3-D printed injectors showed no difference in performance from traditionally manufactured ones. In the coming days, engineers will perform computer scans and other inspections on the injector tested last week.

“This successful test of a 3-D printed rocket injector brings NASA significantly closer to proving this innovative technology can be used to reduce the cost of flight hardware,” said Chris Singer, the director of the Engineering Directorate at the Marshall Center, in a statement.

The first 3-D printed part to be hot-fire tested on a NASA engine system was an exhaust port cover made at the Marshall Center and tested at the Stennis Center. And NASA is looking beyond printing engine parts. The space agency is working with Made in Space to develop and test a 3-D printer for the International Space Station, which would print tools as needed, and they’re also looking at printing food for long-duration missions.

See a video of the test below: