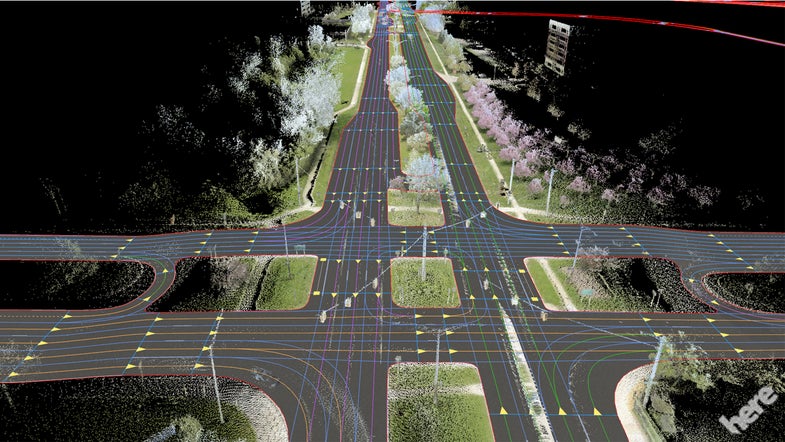 The future landscape of the autonomous car industry is beginning to take shape with the impending acquisition of Nokia’s mapping software, Here, which already has a focus on “humanised driving.”

German companies Audi, BMW, and Daimler are reported to be making a deal with Nokia to buy the mapping software for more than $2.7 billion.

With this software, these automakers would be positioning themselves to compete in a market soon to be flooded with autonomous taxis by Uber and Google, and be able to offer comparable or premium autonomous driving products. Apple is also reportedly building their car, supported by their hires of a robotic car expert and senior executive from Chrysler, and ex-Tesla designers. (Not to mention potentially having the most-used map data in the world.)

It’s also worth noting that Audi has already been developing its own autonomous, or “piloted,” cars. In April, an Audi A7 named “Jack” drove a 550-mile span from Silicon Valley to Las Vegas, although the underlying map program wasn’t made clear. Another company, Cruise Automation, announced a product that adds driverless capabilities to specifically the Audi A4 or S4, that works on certain California highways.

A robust map data set is crucial to operating an autonomous car–if the car doesn’t know where to go, it can’t go anywhere. Nokia identified this early on, and has already used its LIDAR-equipped cars to create high-definition maps of certain roads and highways, accurate down to 20 centimeters, according to the company. Their LIDAR (Light Detection And Ranging) system features 32 lasers mounted on a car, concurrently collecting 700,000 data points per second at distances of more than 200 feet. (Think the Terminator of remote mapping cars.)

Here’s a look at what Here LIDAR data looks like, when put to use in a city like Philadelphia:

Nokia’s Here has already used this to maps streets in Silicon Valley, Michigan, France, and Germany, which they announced would be made public yesterday. They’ve also announced a partnership with Mcity, the University of Michigan’s 32-acre faux city solely populated by autonomous vehicles.

Nokia’s Here is is far more accurate than even Google’s Street View car (or Trekker or Trolley or Snowmobile). And Uber, while it recently acquired Bing’s mapping services, has similar, albeit less robust, mapping data to Google. Uber was initially reported to be bidding on Nokia’s services, but dropped out a few weeks ago, according to Reuters.

The ridesharing company has a wealth of data from their drivers, but given that the whole point of the app is a decentralized marketplace for rides, don’t expect your Uber driver to sport a LIDAR array anytime soon. Apple, on the other hand, also has mapping vans out on the road. All of which is to say: for companies looking to provide cars in our increasingly autonomous future, maps are a necessary cost of doing business — either making maps of their own from the ground up, or buying them.