Artillery ammunition is heavy, but robots are strong. 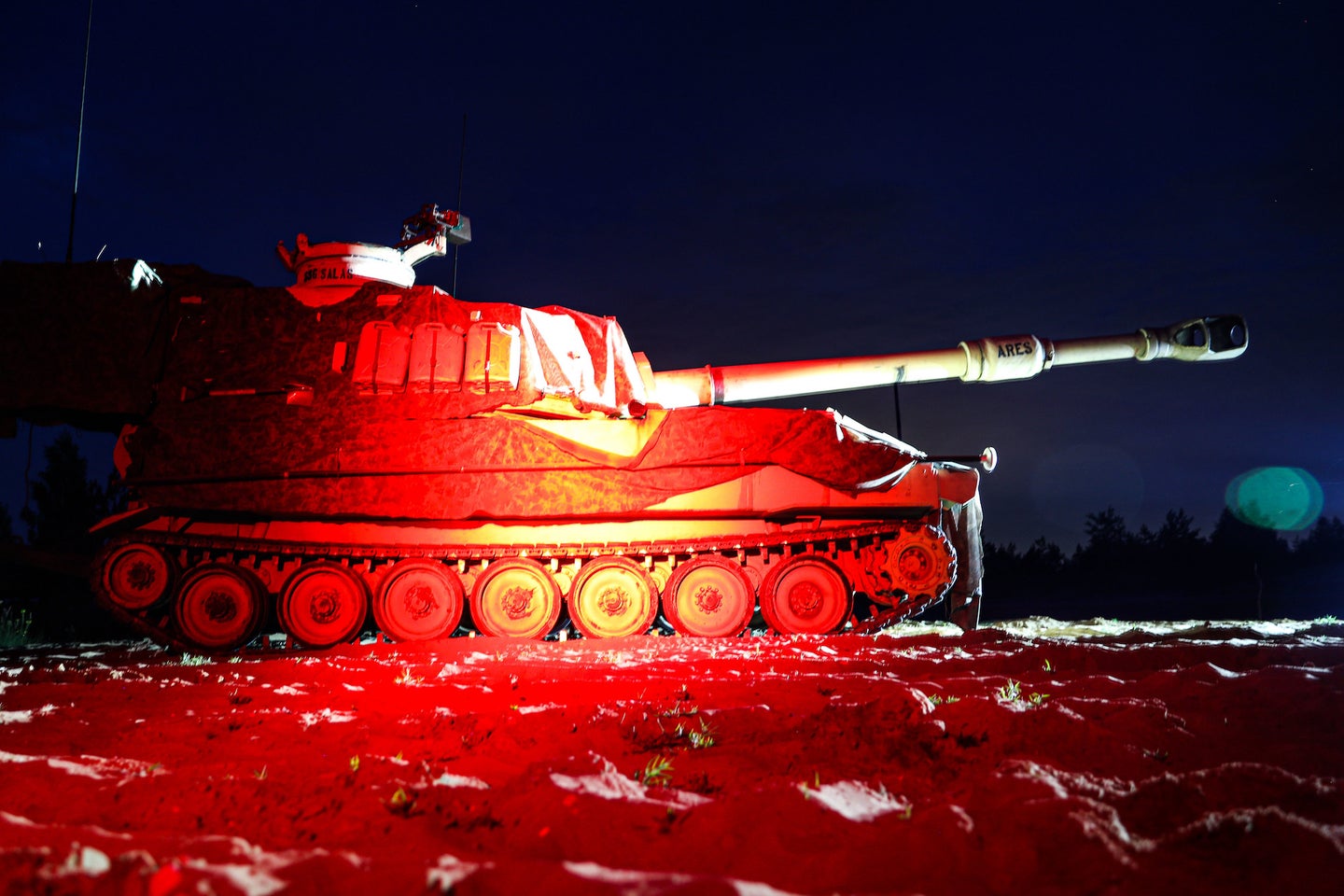 A US Army M109 Paladin howitzer seen in Latvia in July, 2022. US Army / Eliezer Meléndez
SHARE

To fire artillery faster, the US Army is turning to robotic arms. On December 1, Army Futures Command awarded a $1 million contract to Sarcos Technology and Robotics Corporation to test a robot system that can handle and move artillery rounds.

Every artillery piece is, in essence, a tube that combines the artillery shell with an explosive propellant, hurling a projectile and pain far away to someone else. The rate of artillery fire is determined by how quickly the crew can aim, load, and reload the gun. For artillery on the ground, that’s a matter of drill and skill, training the humans to lift and load, and clear and seal guns as fast as possible without dropping an artillery round that can weigh over 90 pounds.

As such, the Army hopes that robotics can help with this process. “The Sarcos robotic ammunition handling solution leverages a dexterous robotic arm that was designed to be integrated into the U.S. Army’s fleet of Self-Propelled Howitzer Systems,” the company said in a release.

A self-propelled artillery system is a long-range gun mounted on a vehicle, usually a tracked and to some extent an armored one, that looks at a distance like a tank with a very large gun. The Army’s self-propelled howitzer is the venerable M109 Paladin, whose earliest models entered service in 1963. The Paladin has been upgraded at least 15 times in its long service, with new production models adapting to better technology and changing needs in combat.

Operating a Paladin at present takes a crew of six. The driver directs the vehicle, the gunner aims the weapon, three ammunition handlers load and ready the weapon, and a commander oversees the whole operation. Fitting three people in the back of the Paladin to lift and load ammunition means specifically finding recruits who can fit within the vehicle’s confines. Those people must also endure the stress of repeatedly lifting and loading rounds at the pace of battle.

[Related: The US’s latest assist to Ukraine: Rocket launchers with a 43-mile range]

For the Extended Range Cannon Artillery, the Army’s latest iteration of the Paladin-derived design, the Army is hoping to double the range of its artillery, while keeping pace with the complex tasks of firing and calibrating shots. Depending on ammunition, a Paladin today can hit targets at a range of 11 to 15 miles away. The Extended Range version, which has been thoroughly redesigned since the 1963 models, will have a range of 40 miles.

“The Extended Range Cannon Artillery system is used extensively in the U.S. Army for long range precision firing, but the downside to this system is the weight of the ammunition needing to be hand-loaded by Soldiers in the field,” Reeg Allen, vice president of business development, Sarcos, said in a release.

An automated system, using robot arms to fetch and ready artillery rounds, would function somewhat like a killer version of a vending machine arm. The human gunner could select the type of ammunition from internal stores, and then the robotic loader finds it, grabs it, and places it on a lift.

If it sounds futuristic, a system like this is actually already in use. This is how the automated loader of the Panzerhaubitze 2000 self-propelled howitzer works. That gun is in service with several nations, including Germany and Ukraine. The use of the automated system requires one fewer human artillery crew member in the vehicle. The PzH 2000 also has an automated loader for outside the vehicle, allowing soldiers to carry ammunition from trucks or nearby storage and restock the vehicle in the field, without having to crawl into the confined space of the artillery crew compartment.

[Related: What to know about the Caesars, the gigantic truck-mounted artillery units France sent Ukraine]

Testing the new automated system means ensuring not just that it can lift and load artillery, but that it can also handle the rigors of war. Any useful hardware must be able to absorb the shock and vibration of driving, as well as handling the environmental factors in which it operates, from intense heat to sharp cold, as well as erosion from sand, dust, and humidity.

Should the robot arm perform as expected in testing, it will eliminate a job that is all repetitive strain. The robot, lifting and loading ammunition, is now an autonomous machine, automating the dull and menial task of reading rounds to fire.

Improved speed and reduced crewing of artillery are always broadly good objectives, and the ongoing war in Ukraine has emphasized the continuing role of artillery on modern battlefields. Self-propelled artillery offers a way for armies to shoot and scoot, unleashing salvos and then relocating before retaliation. Unlike high-end rock and missile systems like the HIMARs, self-propelled artillery can deliver that barrage using much lower cost artillery shells.

Watch an automated loader for a PzH 2000 in action below: