This drone knows precisely where to drop a life-saving raft

Some drones deploy weapons. This one drops rescue equipment to people stranded out at sea. 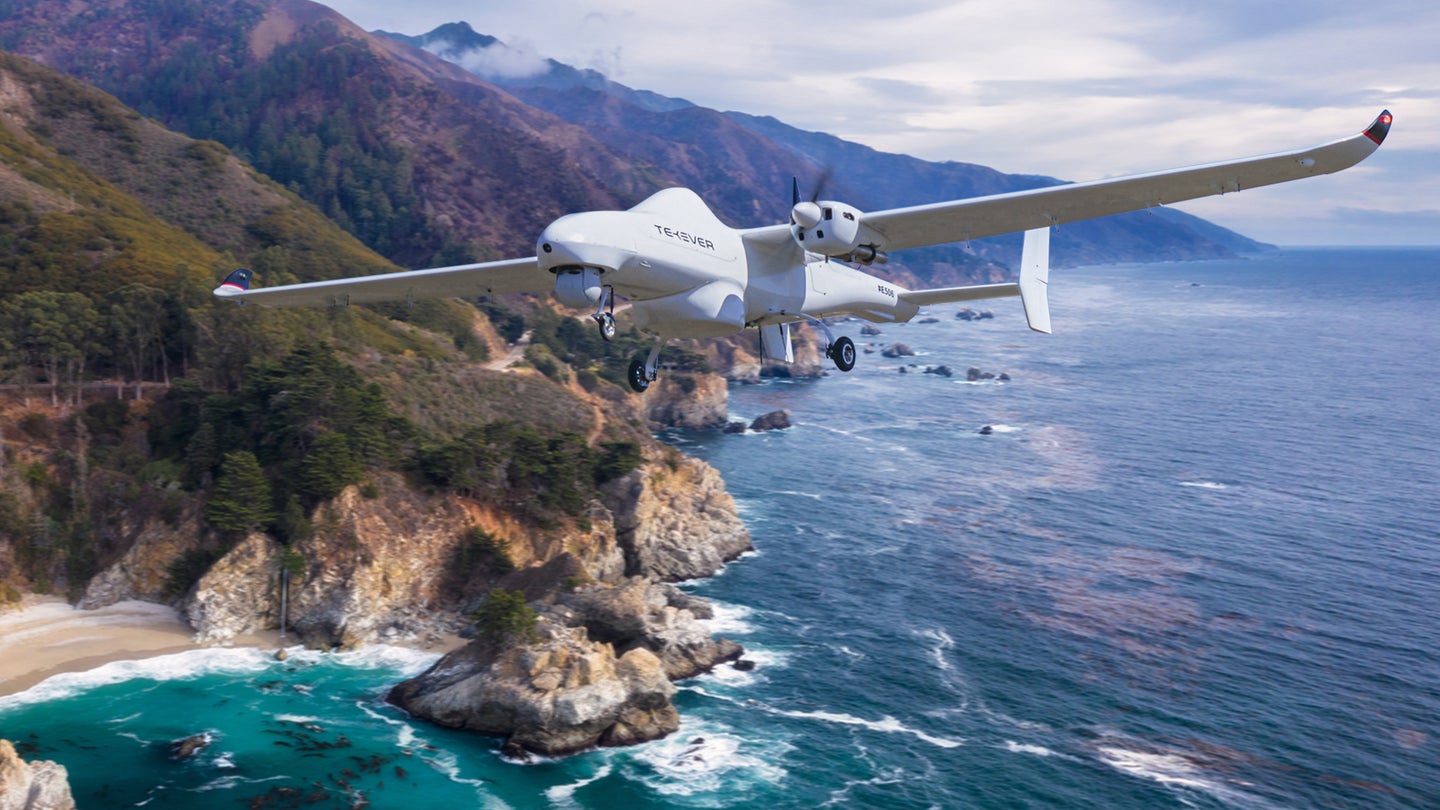 The ocean is a rough place to have an emergency. When a ship capsizes, or a plane crashes into the sea, people are left with whatever flotation devices they have on hand. Then they have to wait for rescue to not just reach them, but to find them.

At London’s Defence and Security Equipment International exhibition, Portugal- and UK-based drone company Tekever announced September 14 that its AR5 drone can now carry and deploy self-inflating life rafts to assist in water rescue. The AR5 can operate in winds of up to 40 mph and with light rain.

Roaring into action, the AR5’s twin engines launch it into the sky from a rough grassy runway. Above the water, its internal bay opens, and a sheet of safety-yellow plastic falls out. That sheet expands as it falls, forming a rectangular raft. In the video, below, it lands in the water upside down, before a camera cut shows it on the surface right-side-up. A person swims into the righted raft, where they can stretch out and rest on the water’s surface.

The raft is designed to hold up to eight people, and it comes without oars or an engine. It’s no cruise ship, but it is likely enough. Provided the raft can be dropped close enough for people to swim to it, it could mean the difference between surviving and perishing at sea.

“Until now, we could only be extremely effective on the ‘search’ part of ‘search and rescue’. With the Lifesaver, we can now help on the “rescue” phase as well, helping people to get out of the water, until they can be safely rescued,” Filipa Martins, head of communications for Tekever, said by email.

[Related: This heavy-lift drone could quietly carry a sub-hunting torpedo]

“We’ve developed an algorithm to predict the right flight path and precise drop spot. However, and for a safety reason, we don’t target the exact person’s location, but a close-enough spot,” says Martins. “This distance can be pre-programmed (we currently have it at 50m) [164 feet] or chosen by the operator, according to the specific conditions of the operations (sea state, condition of the person, etc.)”

This month, the Home Office of the United Kingdom said it was using AR5 drones to monitor for asylum seekers and refugees trying to make it to the UK’s shores. By finding the people at sea, the UK can save their lives while also controlling how and if they make it to the mainland, a policy France contends may run afoul of international law.

Finding people in the sea is the task of the many sensors carried on the AR5. These sensors include visual and infrared cameras and multiple kinds of radar. By scanning the surface of the sea, and processing that imagery either onboard or at a remotely connected server, the AR5 can look for unusual activity, and through that, potentially see people it needs to assist.

“We’ve consistently and successfully tested the AR5’s new Lifesaver capability, by deploying liferafts with very high precision in a fully automated process. This new capability allows us to provide a first response in emergency situations,” Tekever’s CEO, Ricardo Mendes, said in a press release. “For the first time, and beyond detecting people in distress, we can now immediately do something to help them.”

The drone doesn’t make the call on its own about assisting a person. Instead, the alert signals a human operator, who can confirm the drone’s findings, and decide whether or not to release the life-saving payload.

“There’s usually an operator that is not only looking at all the information, patterns detected and alerts provided by the system, but also in constant coordination with the authorities and other assets available on the field, in order to maximize the chance of saving people on time,” says Martins. “The decisions are informed by the system, and taken by the operator, so if the system detects a [pattern] that it believes is a person in distress, the operator can decide, looking at the data, if that is the case or not.”

While the people will be stranded on the raft until human rescuers come along with boats or ships, they will at least be spared the risk of drowning from exhaustion, or of dying from hypothermia while in the water, a risk in all seas and one especially so in the Atlantic and the North Sea.

By operating from rough runways, and alerting human crew when they need to make a call while it’s in flight, the AR5 and drones like it allow for a greater expansion of what can be seen and surveilled, while only modestly increasing the amount of humans needed to do the monitoring. Including internal carried rafts as a life-saving payload is an unqualified benefit. It also demonstrates that the drones could deliver other payloads on other missions, from parachuting resupply to whatever else a military might want to drop.

Oceans are vast and hard to monitor. By shifting that function to a semi-autonomous machine, much more of the sea can be seen.

Watch the AR5 in action below: