Volvo plans to make Starbucks a recharging stop for your EV

Chargers are coming to some of the coffee shops along a route in Colorado, Utah, Idaho, Oregon, and Washington. 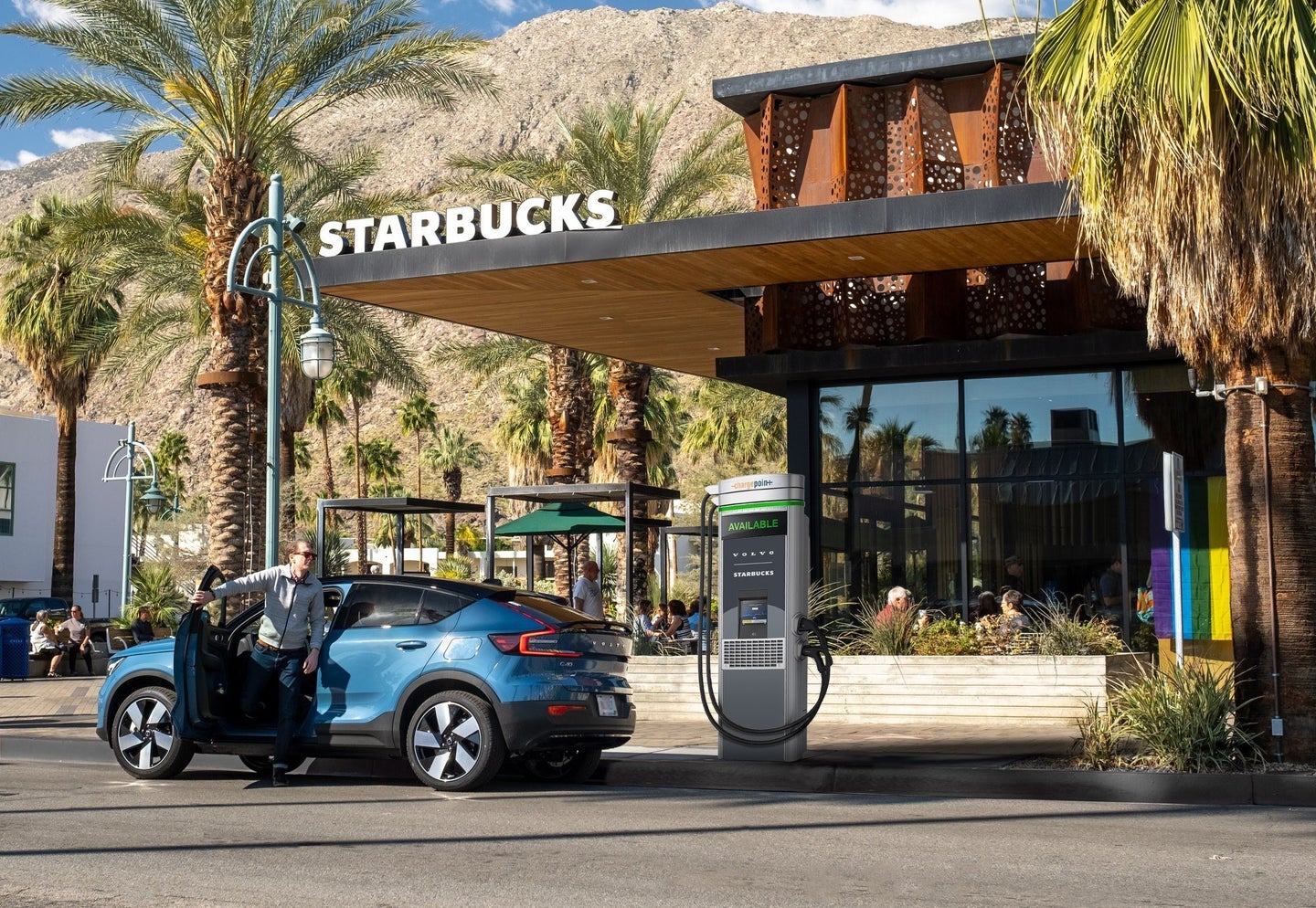 Volvo says the network will be complete by the end of this year. Volvo
SHARE

Drivers cruising in electric vehicles across five states in the western United States will have a new place to plug in their EVs by the end of this year: at Starbucks.

The pilot project, announced today by Volvo, will supply EV chargers at select Starbucks stores on a route that spans Denver to Seattle. The DC fast charging stations themselves come from a company called ChargePoint. In a release, Volvo says that the project could incorporate a maximum of 60 chargers in total, at more than a dozen of the coffee shops. The route itself is some 1,350 miles long, and the stations will be spaced at every 100 miles or so.

The news comes on the heels of a major EV charging infrastructure announcement: the federal government’s plan to give states billions of dollars to install charging stations on routes like interstate highways, with fast chargers every 50 miles. Those funds come from the infrastructure bill passed last year, and the recent plan outlined how they will be allocated.

But even if this coffee-meets-battery news isn’t a major infrastructure development on the same scale of the federal plans, James Di Filippo, a senior analyst with Atlas Public Policy, says that smaller steps like this are still good. “They’re very important,” Di Filippo says. “This kind of corridor charging [along travel routes] is pretty accepted among most professionals in the field to being really critical to supporting mass adoption [of EVs].”

“We need a network that is reasonably as ubiquitous as gas stations are in these kinds of corridors,” he adds.

Volvo will be branding the chargers with their company name, and says in a news release that people driving Volvo EVs can use this network at “no charge or at preferential rates,” although it will be open to non-Volvo drivers by paying for it, too. The company is likely looking to see if the “network can help them sell more vehicles,” Di Filippo speculates.

The charging power of the stations to be installed is a key factor in how helpful they will be. A Volvo representative notes via email that “Volvo will be using a mix of ChargePoint DC equipment including their Express Plus and Express 250 units. The Express Plus is capable of delivering up to 350 kW to a single vehicle.”

“It is encouraging that they are including those chargers,” Di Filippo adds via email, referring to the faster Express Plus rigs. The Express 250s, though, are “pretty slow for a corridor charging application,” he says, as they take around 20 minutes to boost a car’s battery by some 70 miles. He says that he hopes any location with a slower charger also has a faster one on hand, too, in a mix-and-match strategy.

An early map of the project from Volvo shows the network snaking across Colorado, Utah, Idaho, Oregon, and Washington.