Concept Video: Your Next Plane Could Take Off Vertically 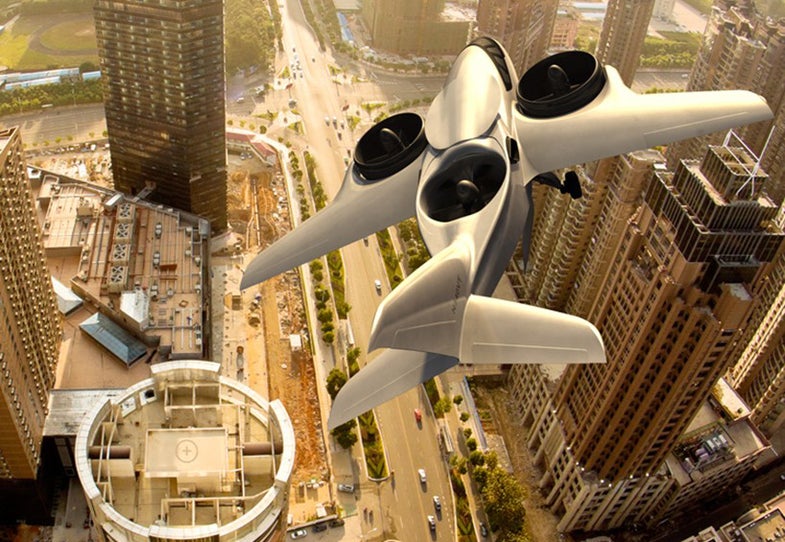 The ideal airplane doesn’t need a runway. Since Kitty Hawk, the standard design of a fixed-wing airplane assumes the plane will build momentum and lift by accelerating along an open stretch of land (or sometimes sea), and will need to land by decelerating along a similar smooth path. To free airplanes from runways, they need a different way to get airborne, and in this concept vertical takeoff and landing (VTOL) plane from XTI aircraft, promises just that: a business-sized five passenger plane, with tilt-rotor engines that let it fly like a plane but takeoff and land like a helicopter

The video below, from XTI’s crowdfunding campaign, puts their concept squarely at the end of a long chain of airplane evolution:

The Denver-based company proposed TriFan 600 plane will seat five passengers, as well as a pilot. They envision an airplane that can travel up to 1,200 miles, with a maximum speed of 400 mph and a cruising altitude of 30,000 feet. Three ducted fans will lift the airplane into the sky in about 90 seconds, and then two of those fans will tile from parallel to perpendicular, propelling the plane forward in the air, no runway required. A sliding door will cover the third fan, so that it doesn’t interfere with the aerodynamics of the plane in flight.

XTI is currently raising money through StartEngine, an “equity crowdfunding platform“, where people interested in buying into the economic future of a business aircraft can reserve shares. If a premium, passenger-carrying VTOL plane seems beyond their budget, businesses can instead look to Sony’s new Aerosense drone, which offers the same kind of take-off and landing ability in a much smaller, wobblier body.