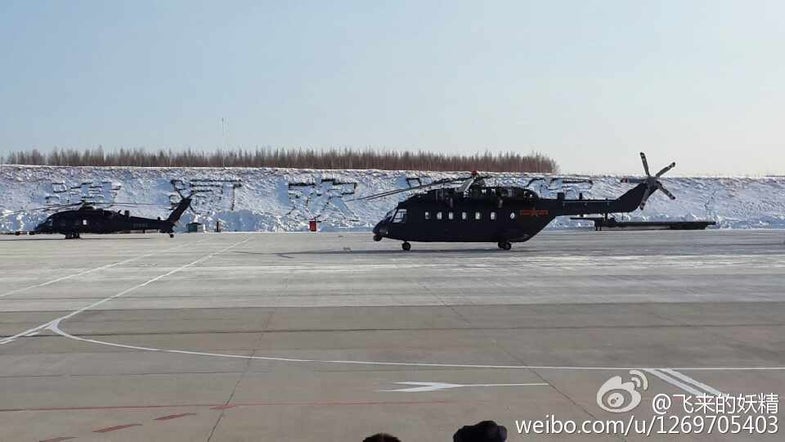 Utility helicopters may not get the same buzz as their attack counterparts or fighter jets, but their rapid air transport, large cargo capacity and surveillance capabilities are a necessary part to any modern military operation. China has gotten off to a late start in building modern utility helicopters, but now it’s making up for lost time. In late January 2015 new images appeared online of a snow covered airfield in northern China, where a heavy Z-18A utility helicopter took a test flight, while the elusive medium Z-20 utility helicopter lurked in the background. 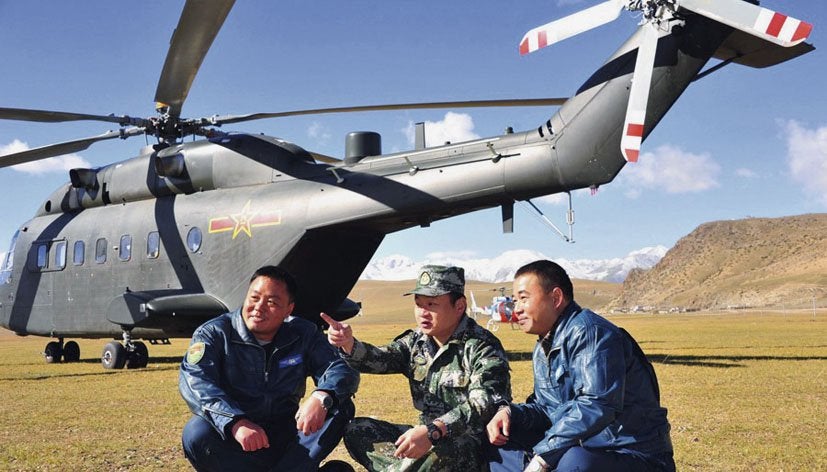 The Z-18A is the PLA version of the Z-18 helicopter (a development of France’s Super Frelon), in has a redesigned nose, more powerful engines, infrared cameras, radar, and satellite communications. It is also capable of high altitude operations, as shown here in the Himalayas, where it will replaced China’s 30 year old Blackhawk helicopters.

The Z-18A is a heavily redesigned version of the Z-8, which in turn was a license production of the forty year old French Super Frelon helicopter. The fourteen ton Z-18 has far more powerful engines, digital avionics, an infrared video camera and a larger camera space. Of note, the Z-18 has become the workhorse of the Liaoning aircraft carrier, with airborne warning and anti-submarine versions already in service. The dark green Z-18A has been tailored for Army operations with features such as an aerodynamically efficient nose, terrain following radar, satellite communications system and high altitude engines that enable it to fly in the high altitude Himalayas. 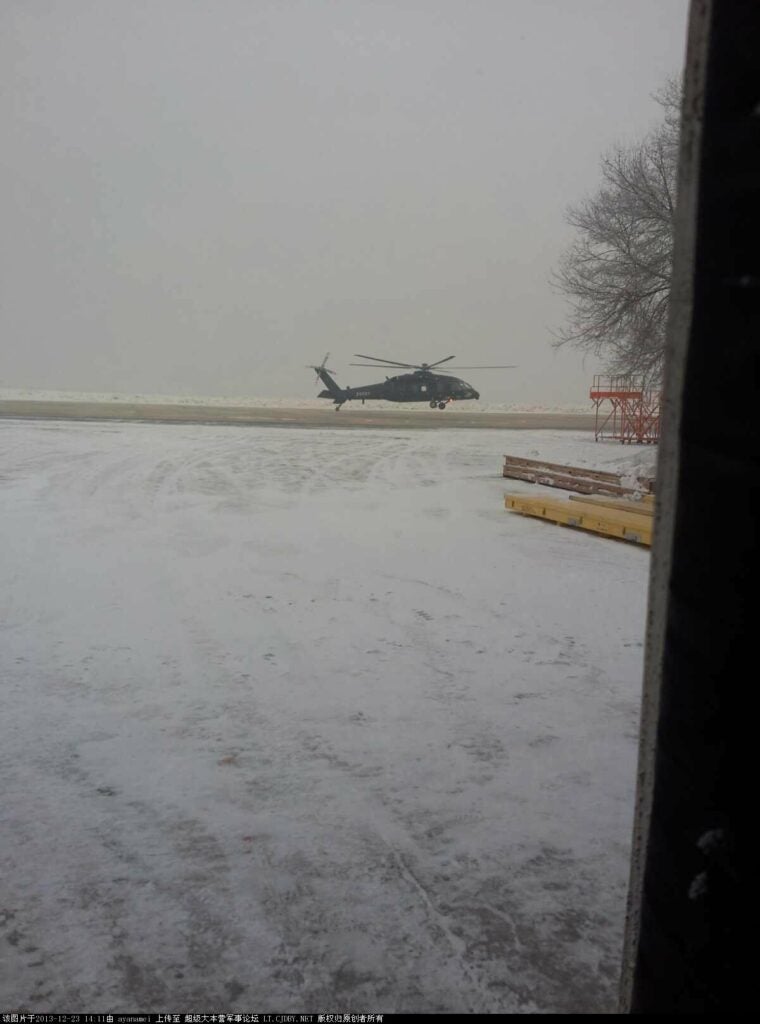 The first Z-20 prototype, numbered “20001”, made its first flight on December 23, 2013. While it is has been rarely seen since then, it’s likely to have been put through an extensive flight testing schedule in 2014.

Ironically, the only known Z-20 prototype, “20001”, has not seen its photographs posted online as much as far more sensitive aviation projects like the J-20 stealth fighter. This could be due to a lack of interest from Chinese military watchers, or that its testing occurs in more remote areas compared to fighters. But with a second prototype apparently under construction as of summer 2014, the Z-20 will become more prominent on the Internet in the year to come. 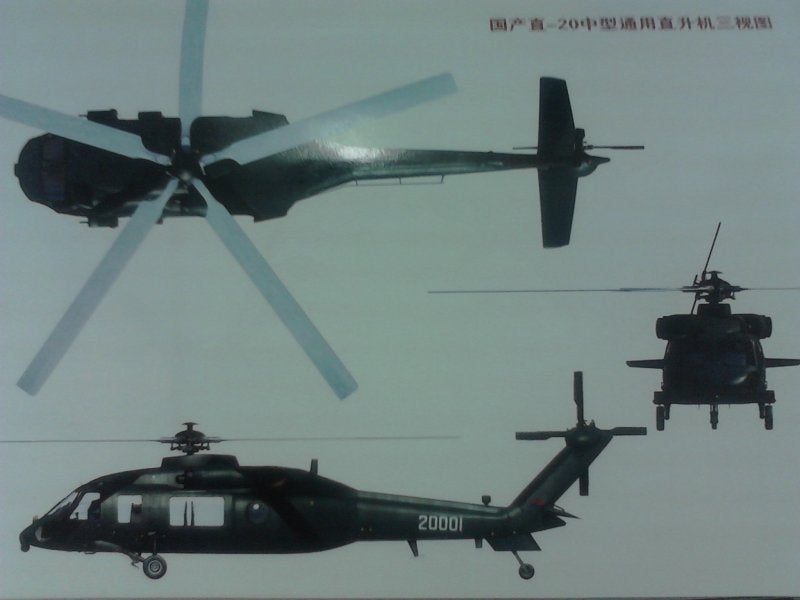 This computed generated image shows the Z-20 from the side, front and top. It is an accurate rendering of important differences between it and the SH-60, including the cockpit, number of rotor blades (5 vs. 4), tail and driveshaft. 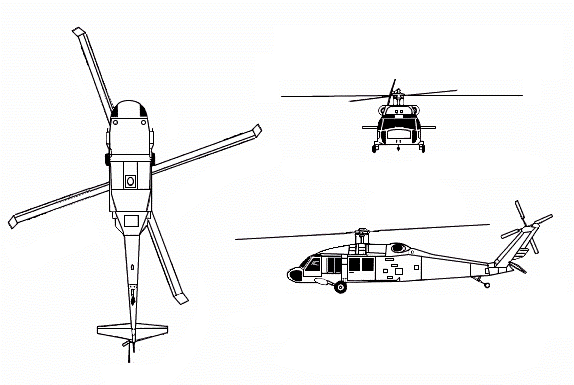 This three image drawing shows the American UH-60 Blackhawk helicopter, of which the Z-20 shares several similarities with (most notably in the main fuselage). China bought 24 S-70s (the export version of the UH-60) in the 1980s.

First flying on December 23, 2013, the Z-20 shares similarities and components, like the passenger cabin, with the ubiquitous American S-70/UH-60 Blackhawk helicopter (China currently owns about 22 S-70s). However, the Z-20 has five blade (vs. the S-70’s four blade) main rotor, Chinese engines and gearbox, and a smaller tail. The Z-20 weighs about ten tons and can either carry four tons of external cargo or twelve infantry. Once in service, the Z-20 would replace China’s foreign designed Z-9 and Mi-171 helicopters, providing various military units such as mountain troops and submarine hunters with a capable air platform. It would also operate as a search and rescue, transport and anti-submarine warfare helicopter for Chinese warships too small to carry the Z-18.