The thorny history of barbed wire

Looking back on the American invention's complicated past. 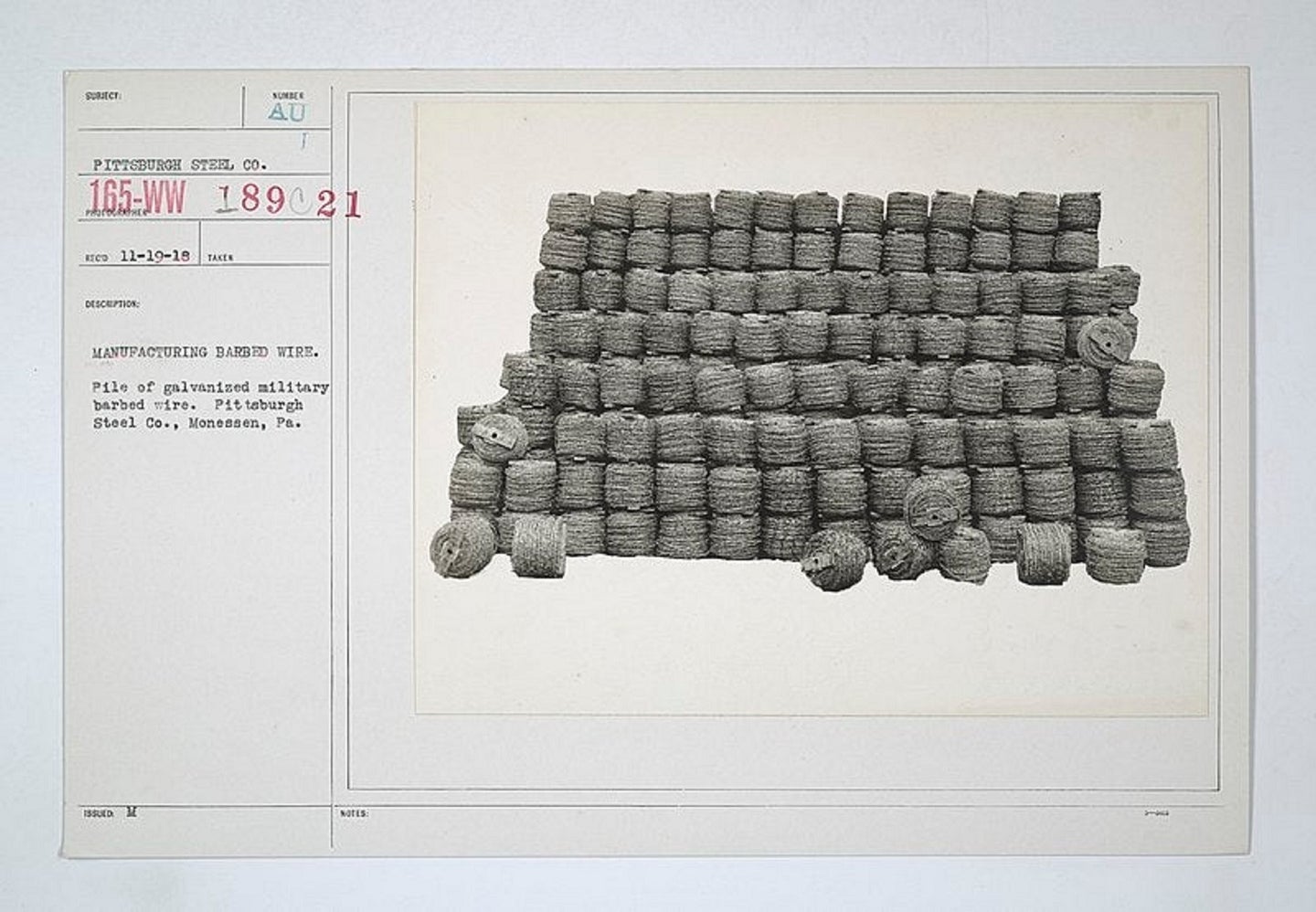 Wire fencing might seem mundane, but it played an important role in how the US was settled and shaped. Department of Transportation
SHARE

This post has been updated. It was originally published on April 11, 2019.

There are more than 700 steel knots in The “Bobbed Wire” Bible, Jack Glover’s “illustrated guide to identification and classification” of barbed wire. They have names like Scutt’s Wooden Block, Greenbriar, Glidden Union Pacific, and the J. Brotherton Parallel. Scrupulously updated and republished by Cow Puddle Press starting in the 1960s, the bible—like the rest of barbed wire’s history—is one-part Americana and one-part innovation. Glover’s book and similar materially-specific compendiums (the Barbed Wire: Identification Encyclopedia comes to mind) document the minutiae of fencing materials and techniques. But these texts are also treasure chests of historical and cultural insight; behind each illustration is an inventor, a time, place, and origin story.

Because that’s the thing about barbed wire: It’s a physical object—you could hold it in your hand if it wasn’t so sharp—but it’s also an idea.

The use of barbed wire in the West

The American frontier was never actually empty. Native Americans have lived on the land for at least 15,000 years. The evidence is clear, from the Mesa Verde Dwellings in Colorado to the millions of indigenous people still living in the southwest today. But white settlers, unleashed on the landscape by Abraham Lincoln’s Homestead of Act of 1862, which gave each citizen the right to claim 160 acres of public land, certainly treated it that way. As they worked their way west, they sought to clear the land of its human and non-human inhabitants, and exert control over the dirt that remained. One of the most practical challenges these families faced was drawing boundaries—keeping people, crops, and cattle in (or out).

With too few trees to build wooden fences, and walls of prickly vegetation too slow to grow, some enterprising settlers began tinkering with wire. But there was one major problem: “[W]hen a wire fence was placed between a 1,000-pound Texas longhorn and a patch of lush green pasture, it proved to be something of a pushover,” writes George Pendel in his Atlas Obscura article on the barbed wire mecca of La Crosse, Kansas. That’s where the barbs came in. According to Atlas, the U.S. Patent Office processed more than 200 different patents for various types of “spiked fencing” between 1867 and 1874. The contraptions varied widely, from lines alternating spikes and wooden boards, to sheets of wood studded with spikes. But Lucien Smith is credited with making the first barbed wire prototypes, which he called “thorny wire.”

That answers the questions of who invented barbed wire and when was barbed wire invented. The trouble was that all of these products were made by hand. It wasn’t until 1874, when Illinois farmer Joseph Glidden emerged victorious from patent battle over a mechanically-produced fencing material that barbed wire could be made at scale. Glidden’s machine pulled two strands of wire tight around the barb, then wound the wires together around the regularly-spaced spikes. Just two years later, Glidden’s company was making 3 million pounds of the stuff each year, making Glidden a quick and sizable fortune. Other speculators won big on barbed wire, too. John Warne Gates, better known as “Bet-A-Million Gates,” went from selling the poky product to manufacturing “moonshine” (or unpatented) wire himself. His company was acquired by U.S. Steel, where barbed wire would make robber baron J.P. Morgan even richer.

Mass-production sent homesteaders on a fencing spree. Previously, the design podcast 99 Percent Invisible explains, the “law of open range” prevailed out west. As cowboys drove their cattle to sale, the herd could crisscross the land, drinking water and grazing as they went. But barbed wire restricted cattle’s access to streams and rivers. And it was everywhere. By 1885, the entire Texas panhandle was already fenced, according to the Texas State Historical Association, creating a patchwork of privately-owned lands, each wrapped in a barbed wire bow. The effect on wildlife was quick and catastrophic: In a review article for the The Southwestern Historical Quarterly, Wayne Gard described “leathery longhorns … crazed by thirst.” Native Americans called barbed wire “devil’s rope”, because it ensnared wild buffalo. (Like cattle, they struggled to see the thin wire lines before they were wrapped up in it.) Trapped, they died of hunger or thirst, or succumbed from infection as their barbed wounds festered.

Humans weren’t exempt from barbed wire’s wrath. From the earliest days, it’s been marketed as a tool of oppression and control. “Companies promoting barbed wire fencing used imagery in their promotional materials that played on familiar prejudices of the day,” Rebecca Onion writes in her political history of barbed wire for Slate. “[F]armers and ranchers interested in buying knew that they could keep Native Americans, black people, children, beasts owned by others, and poor people out with the new invention.” It persists in prisons, concentration camps both historical and terribly contemporary, and border walls, which continue to threaten wildlife today).

The making and significance of barbed wire today

Barbed wire’s biggest use hasn’t changed, though. Charlie Rugh is the vice president of sales and marketing for the San Antonio Steel Company. “The primary goal was to fence in cattle,” he says, but “it’s a lot more diverse now.” Specifically, people aren’t just fencing in cows, but horses, sheep, goats, llamas, alpacas, and even exotic animals like bison, elk, or deer. This has forced a big shift over the last 50 to 75 years, Rugh says, stimulating new innovations in an old industry.

SASCO, for example, sells fixed knot fences, which is barb-free but strong enough to hold up on widely-spaced posts; horse fence with tight 2-by-4 inch spacing to keep hooves from getting stuck; and, of course, five variations of classic barbed wire, which remains crucial, in Rugh’s words, for “keeping 1,500 pound animals off the highways and byways and motorways.”

These wires are more durable than ever, thanks to two big developments. First, in the 1980s, manufacturers began developing high-tensile barbed wire, Rugh says. They mix steel with a miniscule amount of carbon fiber for more flexibility, without compromising strength. By exposing polymers to high heat, scientists can forcibly crystallize carbon molecules, concentrating them at unusual densities, while keeping substances light.“You’re getting a wire that weighs half as much, but performs the same if not better,” Rugh says. And because it’s lighter, it’s also cheaper, making it more appealing to farmers who struggle to keep their agricultural operations profitable.

Then, in the early 2000s, Rugh says, the industry turned its focus to new methods for galvanizing the steel, the better to ward off rust. The best barbed wire is now coated in a mixture that’s 95 percent aluminium and 5 percent zinc. “That’s been used in utility wires, stranded cable, and things like that. And they’ve begun to transfer that to ag wire,” Rugh says. While conventional Class I barbed wire lasts seven to 10 years and the Class III galvanized products on the market can keep up to 20 or 30 years, the zinc/aluminum-coated cables could last on the order of 50 years, at least according to salt spray tests designed to see how these products stand up to the elements.

Despite its evolution in the American west, the biggest innovations in barbed wire are coming from other shores. “A lot of the fencing technology and improvements have always developed in Australia and in New Zealand,” Rugh says. “The North American market has lagged behind and been slower to adopt these new technologies.”

[Related: Travel through time on history’s most ridiculous rides]

But barbed wire’s cultural resonance has persisted in the US. There are barbed wire museums, competitions, even an Antique Barbed Wire Society. Mostly, though, it provides structural support to the myth of the wild West: an endless expanse for the taking, a dangerous template for conquest that’s been transposed from California to other countries, the internet, and even outer space.

In his 1949 post-war poem Memorial for the City, W.H. Auden used barbed wire as a recurrent motif—a symbol for borders, bureaucracy, and violence. “Barbed wire proclaims that you are kept out or kept in, and, when you resist, it rips you,” he wrote. “Other barriers weather, crumble, grow moss; wire merely rusts, and keeps its sting.” For many people, that’s the appeal.