Here's a closer look at the material science behind the fabric from a can. 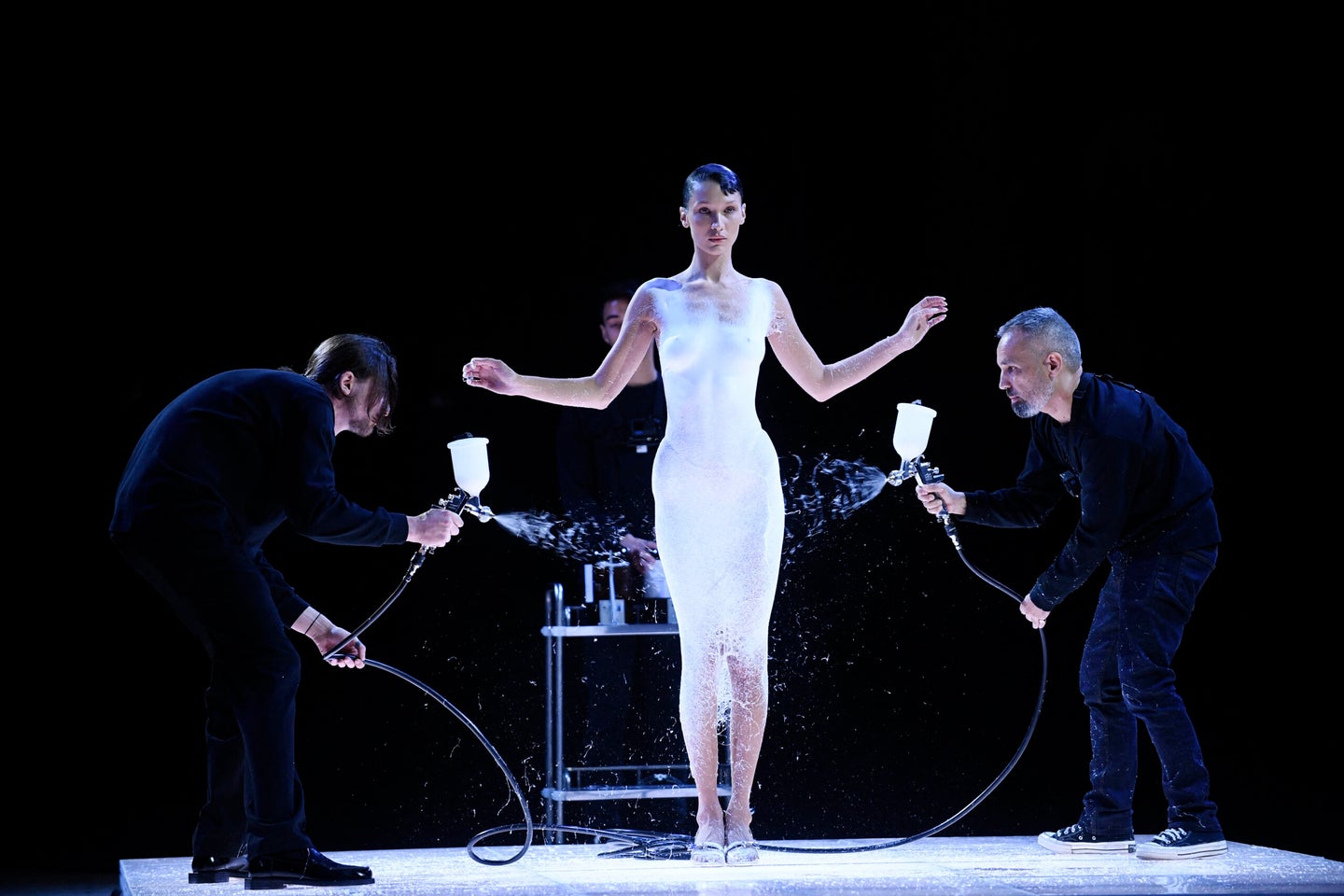 Last Thursday at the close of the Coperni show during Paris Fashion Week, spectators watched in awe as two men spray painted a form-fitting white dress in real-time onto model Bella Hadid. What’s more is that after the application process, a woman clad in all black used her hands to manipulate two patches of the paint into off-shoulder sleeves, and used scissors to cut a slit from the bottom. The dress moved with Hadid’s body like regular, fitted fabric as she walked down the runway. Talk about fast fashion.

This instantaneously materialized dress is not a magic trick, but a testament to innovations in material science more than two decades in the making. The man behind the creation is Manel Torres, who in 2003 created the substance used on Hadid, Fabrican (presumably a portmanteau of the phrase “fabric in a can”). His inspiration? Silly string and spiderwebs. His idea was to elevate the coarse cords of the silly string into a finer fabric that could be dispersed through a mist. Torres explained in a 2013 Ted Talk that when this spray-on fabric comes in contact with air, it turns into a solid material that’s stretchy and feels like suede.

[Related: Tips for buying and caring for long-lasting fabrics]

What exactly is in Fabrican? According to the patents granted to the company, the liquid fabric is made up of a suspension of liquid polymers (large molecules bonded together), additives, binders like natural latex, cross-linked natural and synthetic fibers, and a fast-evaporating solvent like acetone. The fibers can be polyester, polypropylene, cotton, linen, or wool.

Torres added that they can easily form the material around 3D molds or patterns and tweak the textures, so they can get something that’s fleece-like, paper-like, lace-like, or rubber-like. He imagined that people could go into a booth, customize their dress, and instantly have it 3D printed onto their bodies. The spray could even be used for spot repairs on existing clothing.

[Related: This stuff melts your crappy fast fashion into fabric stronger than cotton]

The display at the Coperni show comes at an interesting time for the fashion industry, as major companies have been forced to reckon with the environmental consequences of textile production and ever-shifting styles. In response, many designers are now looking for less harmful starting materials in plant-based fabrics like seaweed (which is also being investigated as a plastic film substitute) and mushrooms. For its part, Fabrican states on its website that it uses “fibres recycled from discarded clothes and other fabrics. The technology can also utilise biodegradable fibres and binders in place of fossil-based polymers to reduce the carbon footprint of material and manufacturing.” Additionally, the company said that “at the end of their useful life, sprayed fabrics can be re-dissolved and sprayed anew.”

Torres’ vision for Fabrican has long extended beyond just the fashion industry. Since it’s in a can, the material is sterilized, which makes it suitable for wound dressing and instant bandages. Using sprays and 3D printed polymers to seal injured skin is not an unique idea in the biomedical field; companies such as Nanomedic have also been developing a portable device that shoots out nanofibers to make a protective film atop a wound. Furthermore, Torres has said that they can switch up the formulation of the mix to produce casts for broken arms or foam seats for cars.