The insides of pro bowling balls will make your head spin

They're way cooler than the ones at your local alley. 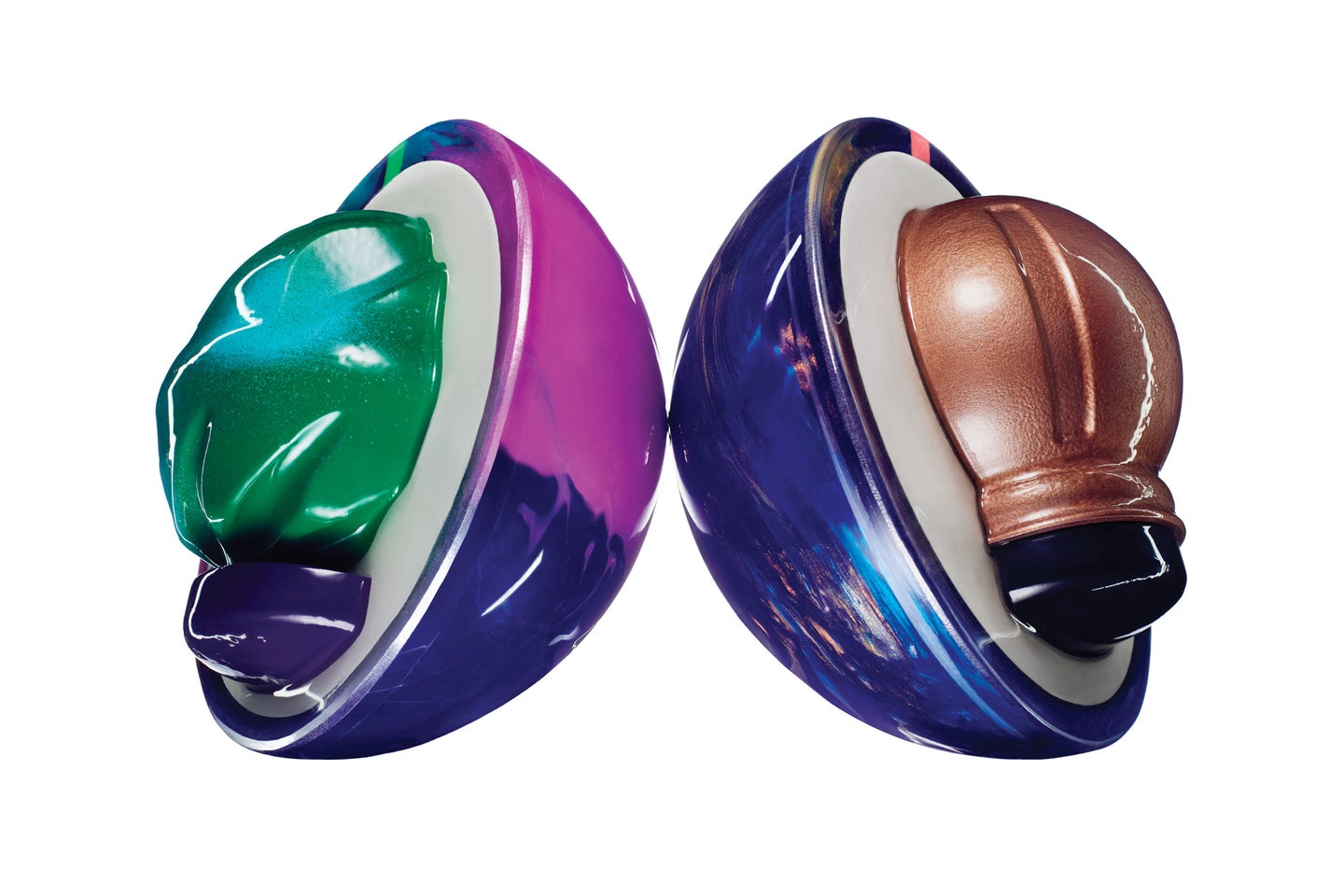 No matter how hard you try to spin the house balls at your local bowling joint, they rarely curve. That’s because they are simple spheres built for durability, not fancy moves. But a small handful of companies—among them Storm Bowling—create gear that is surprisingly complex inside. Precisely shaped, meticulously balanced weight blocks leverage the laws of physics to help skilled alley jockeys throw a strike on most rolls. This clever engineering allows the projectiles to hook inward as they approach the end of the 60-foot lane, where the invisible oil slick on the boards thins. The spin an expert gives the globe (as fast as 600 rpm) will find purchase there as the friction increases, putting the orb right next to the headpin. Here’s a look at what’s going on under the surface.

The crimson disk—called a weight block—in this roller is taller than it is deep, and heavier on its bottom thanks to that silver circle, known as the slug. Those design decisions create uneven rotational forces, causing this model, the Code Red, to sharply swing from the edge toward the center for a strike.

Despite the weird shape, the mass in the Phaze III’s green core is evenly distributed, so the sphere travels in a gentle curve through its impact with the pins. Pros call this a “benchmark ball” because they can use its movements to read the oil pattern on a lane during practice and then adjust their form—or equipment choice—for the competition.

Drilling finger holes typically removes 3 or 4 ounces of material. That can include chunks of the dense weight within, changing how the globe rolls. Divots (seen at the top here) in the Alpha Crux’s blue core leave room for digits without majorly changing the ball’s behavior.

The rotational forces generated by the asymmetrical chunky green block inside the Intense wouldn’t be able to influence the orb’s trajectory as well if the cover couldn’t firmly grip the lane. Crushed mica mixed into the surface of this ball increases friction once it hits dry boards near the pins, creating a hook even for those who throw with less spin.

The red bulges on the Optimus’ symmetrical core let bowlers tweak its performance. If they bore their finger holes into the blob’s bumps, rolls will more aggressively hook; if they avoid them, the mass still ensures a nice curve. The model’s heavier versions—up to 16 pounds—will crash through pins with more force, making them more likely to knock out others.

With high density and a low center of gravity, the Son!Q’s weight block helps bowlers who roll with fewer revolutions per minute add more curve potential to their shots. And just for fun, Storm infuses some balls with a scent: This one smells like yummy gingerbread s’mores.

The Sure Lock’s bright orange, X-shaped mass is composed of heavy iron oxide. That concentrates heft at the center, allowing this sphere to spin quickly just after a bowler releases it—similar to the way figure skaters begin whirling faster when they tuck in their arms. The extra rotations help swing the globe back to center in slippery, oil-heavy lanes.