Meet the ‘Spy Stone,’ a Russian robot disguised as a rock

The prototype can move around and transmit audio and video, too. 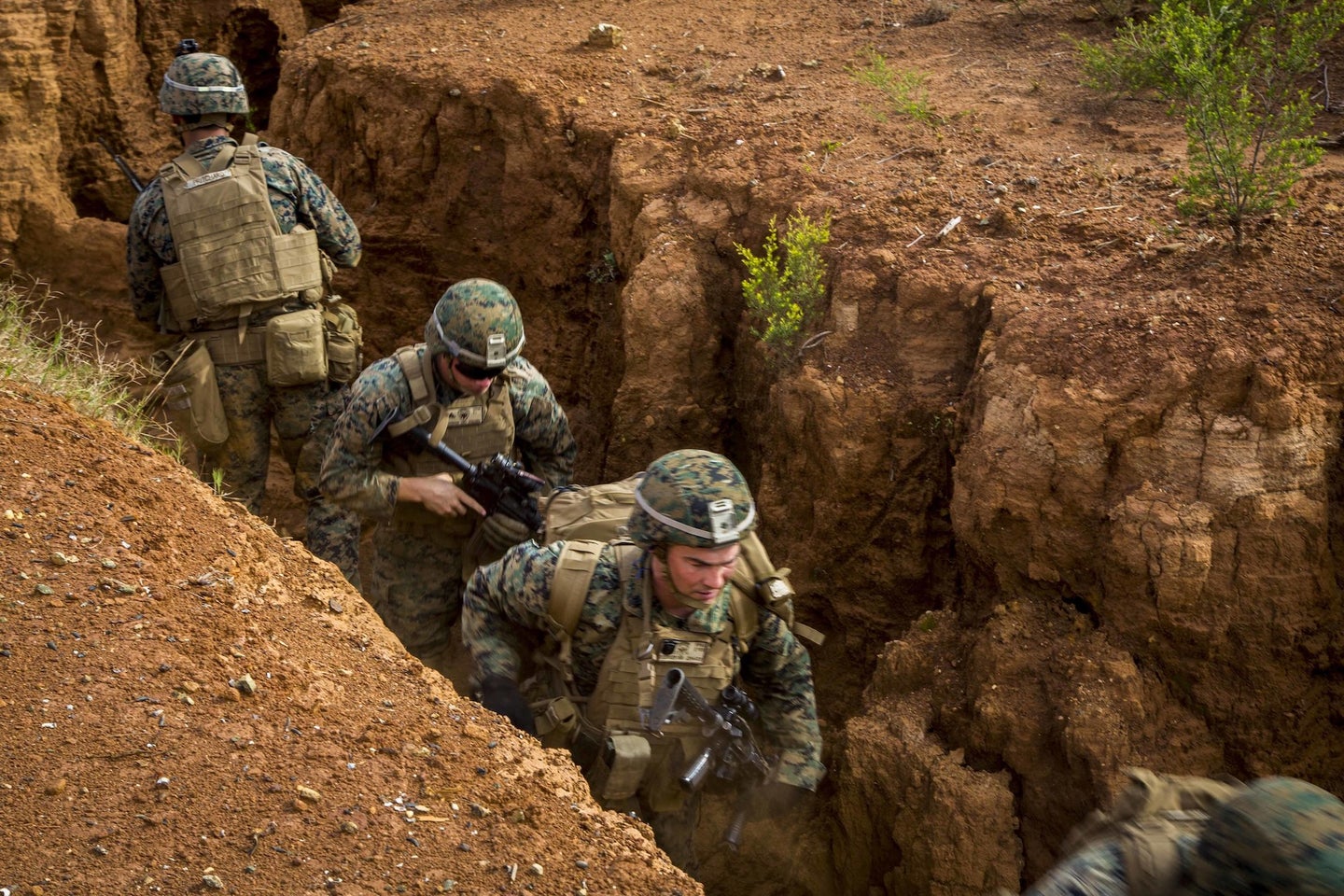 U.S. Marines and Sailors in a trench at Plum Barracks Training Area, New Caledonia, in 2017. One possible use for a gadget like Russia's "Spy Stone" is in trench or urban warfare. U.S. Marine Corps photo
SHARE

Under lightly falling snow, a soldier sets a rock on the ground. A moment later the rock animates, extending first a periscope-like camera, and then lifting the whole of its rocky exterior to reveal a small set of tracks. With mobility now possible, the little robot wheels down the slight embankment of the sidewalk as though it’s a tank crashing over frozen hills. Once in place, the rock body lowers, leaving only the camera peeking out, observing the world around its concealed perch.

Dubbed the “Spy Stone,” this little robot is the creation of Russian Air Force cadets, over the course of three years at the Military Educational and Scientific Center at the Zhukovsky and Gagarin Air Force Academy. It looks, in many respects, like a conglomeration R2-D2 from Star Wars, a remote control toy tank, and a hide-a-key rock.

The robot is only a prototype, but it is one with potential real-world combat implications.

The Spy Stone can record up to 15 hours of video and audio, which it will process and transmit to human operators at a distance of up to 1.25 miles. To ensure that the stone is only recording video of interest, filming is activated by motion sensors, and the robot can go into a dormant sleep mode for close to 24 hours before recording.

“As the developers explained, one of the applications can be reconnaissance during a positional war or a ‘frozen’ military conflict,” says Samuel Bendett, an analyst at the Center for Naval Analysis and adjunct senior fellow at the Center for New American Security.

[Related: Inspired by a seed, this rotating drone will make your head spin]

A short-range robot that looks like a rock is not useful in every situation, but it could find a niche in the static trenches of stalled front lines. Trenches and static front lines are most popularly associated with World War I, but the shelter and safety provided by digging temporary fortifications are a persistent feature of warfare. In Ukraine, where Russian-backed separatists have waged war against the national government since 2014, trenches are a durable feature.

It is into this kind of warfare that a Spy Stone might crawl to gain some little advantage.

If its treads can carry it down a trench or into a blast crater in no-man’s-land, the Spy Stone’s video could let a waiting unit of soldiers know when the coast is clear, or if an attack is coming, and could let soldiers advance on an unsuspecting foe. The small form and concealed shape of the gadget make it a far more subtle agent of espionage than a buzzing drone or an aircraft overhead.

“The “spy stone” can be useful as a passive data collector in an environment where it can readily blend in – like trench or urban warfare,” says Bendett. “The [Ministry of Defence] is now training for this kind of combat and is developing different types of robotic systems capable of functioning in an urban terrain. The downside is that it is potentially fragile and could be easily damaged, especially if it’s uncovered by the adversary (given how it does not have any defenses).”

While the Stone is just a prototype, it draws from existing experience with robots. The cadet’s advisor for the project was inspired by his experience with Russian forces in Syria.

[Related: The military wants their robots to be better listeners]

It also fits into a trend of other small combat robots used for scouting purposes, like the hand-tossed Sphera robot.

“But there is potential utility for this passive collection technology, given how Russian forces tested another passive collection tech – the Sphera robot could just be thrown inside a building to get a quick situational awareness, so this ‘walking stone’ is in line with similar tech meant to give as much data about the battlefield to the Russian soldiers,” says Bendett.

Among the hurdles for the Spy Stone to overcome is its small track size. While tracks are better than tires over most of the terrain it is likely to encounter, even a modest rock could upend the Stone and put it on its back before it could get into position. The short range of the Stone’s communications, too, could present a hard limit, as it requires human operators to stay so close that they are within range of mortar fire.

If that can be overcome, and if Russia decides to further the advance of a trench-scouting robot beyond this prototype, then it could add both a scouting and a psychological advantage to battle. Trench warfare is mentally taxing to begin with. Adding in the possibility that soldiers defending trenches might start thinking every possible rock is a spy could only make that experience more disconcerting.