The aircraft just made an important maiden flight. Now comes the hard part: improving its batteries. 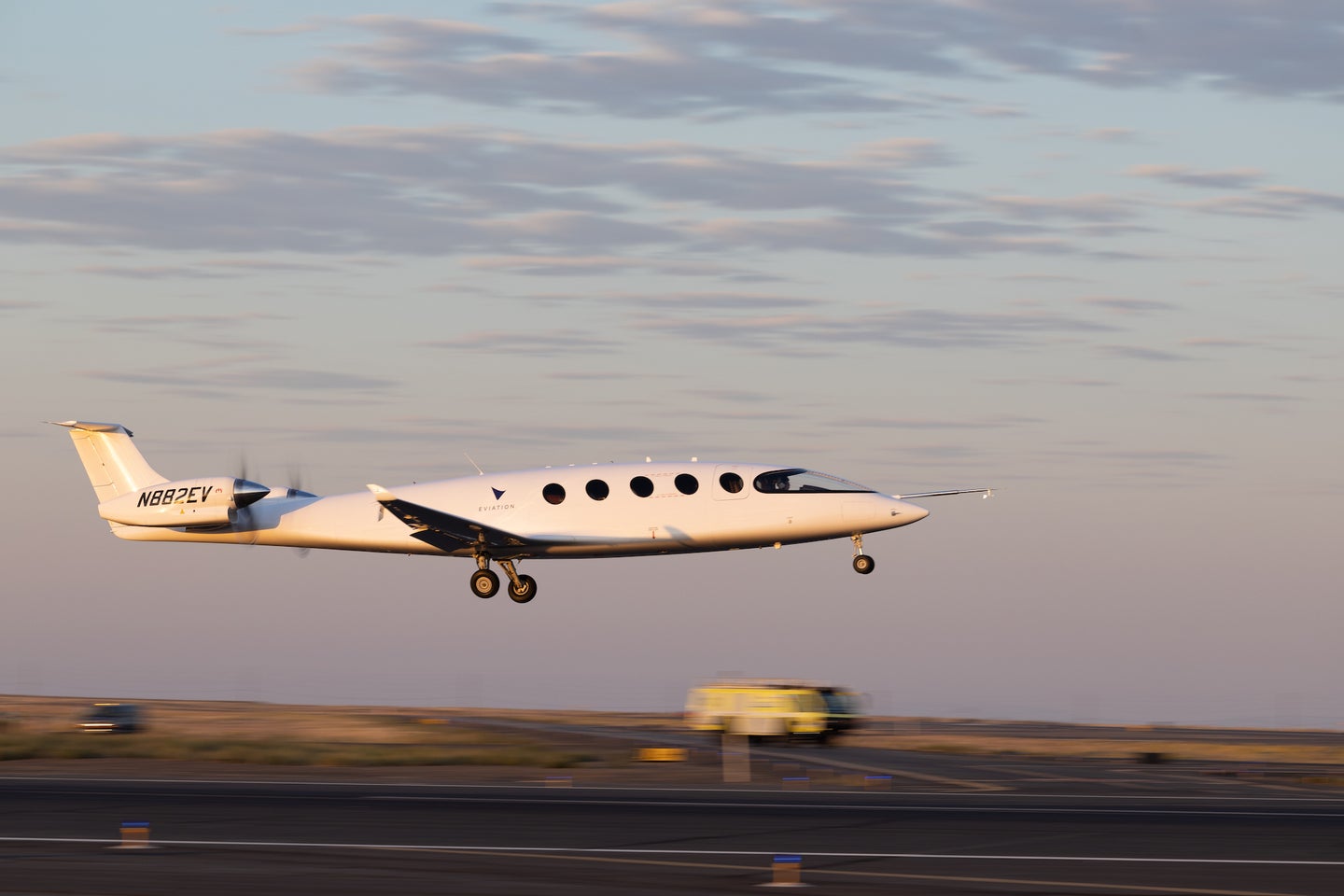 The flight began at 7:10 am Pacific time. Eviation
SHARE

For eight minutes today, an electric airplane from Eviation flew in the skies above central Washington state. Propelled by two electric motors spinning two propellers near the tail, pulling energy from 8,000 pounds of batteries, the aircraft hit a speed of about 171 miles per hour during its brief flight.

The flight of the sleek electric plane, which its maker calls Alice, was a significant milestone for a sector of aviation that focuses on carrying small amounts of people—nine or fewer—short distances, and doing it with no tailpipe emissions.

This successful flight, brief as it was, followed a high-speed ground test that the company conducted on September 18.

While the flight test today appeared to go off without a hitch—save for a brief taxi away from the runway before takeoff and then back again, to adjust a screen in the aircraft—the company has hard problems to solve ahead of this milestone. The most pressing long-term technical problem, Davis reports, is the batteries themselves, which are in the plane’s belly. While the company is targeting eventual flight times of one to two hours and distances of some 170 to 230 miles, or even 288 miles, the energy that lithium-ion batteries can hold right now isn’t currently sufficient.

“The biggest tech challenge that Eviation has to overcome is the development of the batteries—that couldn’t be more clear,” Davis said. “It’s looking at the evolution of the chemistry and the physics around those batteries. Of course, we are able to control how we integrate them, and how we optimize them from a design perspective for the aircraft, but we really do need the industry to boost the energy density.”

That may be the company’s biggest technical hurdle, but others remain, such as conducting more flight tests, building more aircraft, getting the commuter aircraft certified under the FAA’s Part 23, and eventually shipping it to customers such as DHL or Cape Air at prices that airlines can afford. Davis says they hope to make their first deliveries in 2027.

This is not the first electric aircraft to ever fly. Small air taxis from companies like Joby Aviation, Beta Technologies, and others have already taken to the skies multiple times. For example, a flying machine from Beta, called Alia, flew from New York to Arkansas—with many stops along the way—in May. Eviation’s Alice aircraft is positioning itself in a slightly different category from the air taxis being flown by these companies, as it’s an aircraft with the ability to someday carry nine people. (The air taxis from those companies are designed to carry fewer than nine people—Joby’s holds four passengers and a pilot, for example.)

Additionally, an electric seaplane from Harbour Air has taken to the skies, as has a speedy Rolls-Royce machine.

As for today’s flight, which had the aircraft flying at an altitude of 3,500 with Washington’s Grant County International Airport as its point of departure and landing, more immediate post-flight work remains for the team. Davis said that the flight produced oodles of systems data that Eviation now needs to process. That data is measured in terabytes, Davis said. “We need to review it, and understand how the performance of the aircraft matched our models—so we’ll be doing that over the next couple of weeks.”

Watch the first flight, below: