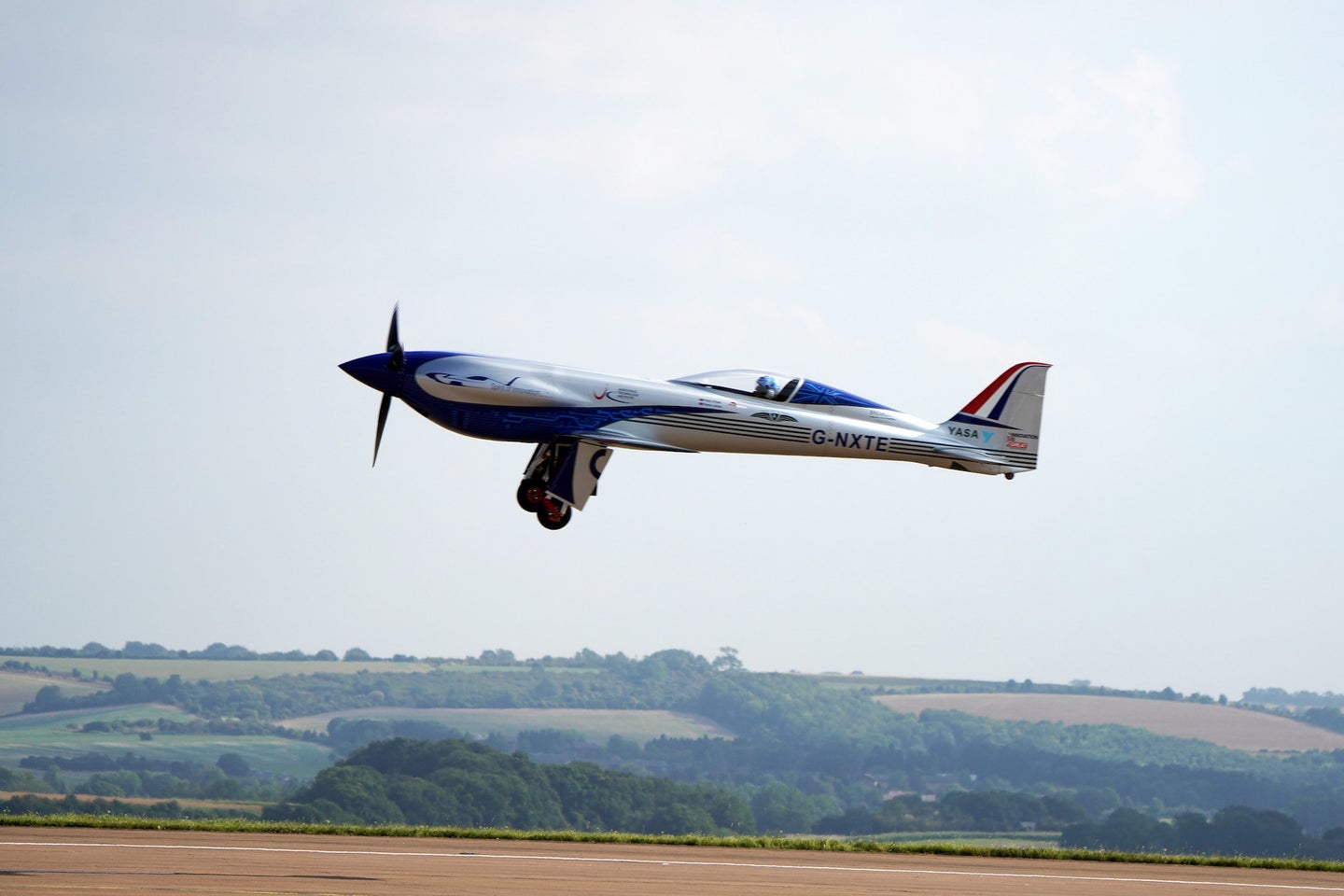 Earlier this month, a small electric airplane lifted off the ground for the first time, and completed a brief, roughly 15-minute long flight. The 23-foot-long plane, called the Spirit of Innovation, is designed to be an electric speed demon. Rolls-Royce, the company that makes it, plans to fly the machine faster than 300 mph before the year is out, and smash a speed record for electric aircraft in the process if it can do so.

Here’s what to know about the experimental aircraft and why Rolls-Royce is flying it.

How does the plane work?

The aircraft, which has flown three times, resembles a regular airplane on the outside. In fact, it began as a kit, a Sharp Nemesis NXT, a type of small aircraft known for competing in the Reno Air Races in Nevada; in 2009 it reached speeds of more than 400 mph. “It used to have a really large internal combustion engine at the front, and then it had a huge fuel tank that sat right behind it,” Parr says. Of course, that stuff isn’t necessary in an electric aircraft, so the team removed it. “What we had left was this huge volume of space at the front of the aircraft,” he says. That space gave them room to install new components.

[Related: The coolest planes at the Reno air races]

Now the guts of the airplane include a three-battery system that’s made up of more than 6,000 cylindrical cells. Each battery powers one electric motor. All told, the three batteries and three electric motors work together to power the propeller in the front, which actually spins a little bit slower than it would if it was powered by a regular engine—around 2,200 RPM instead of 2,800. Parr says that’s possible because they can produce more torque at lower RPMs with the electric system. “What we’re able to do with an electric motor is just generate torque at any RPM,” he says. The propeller’s blades automatically adjust their angle against the air as needed “to optimize the torque.”

The three batteries, plus the three motors, represent three independent systems. Parr says two of those can fail and in an emergency, the airplane can stay in the air powered by just one.

Unlike other electric planes like this one from Kitty Hawk, it needs a human pilot to fly it.

How fast has it flown?

On its first flight, it hit an indicated airspeed of about 210 miles per hour. “We weren’t even trying that hard,” Parr laughs. “We almost got there straight away.”

“We didn’t mean to go that fast on the first flight,” he adds.

When they actually try to break the record, it will happen with an official course and careful measurements. The record they’re trying to surpass for electric aircraft was set in 2017 and is around 213 mph. In other words, the Spirit of Innovation is already approaching the record, at least unofficially. Their goal is to fly at 300 mph. (Update: Parr notes via email that the plane has now hit a top speed of 265 mph.)

The goal with this specific aircraft, which will probably only fly about 20 times in total, is simple: “Go incredibly fast, and excite and inspire people,” Parr says. In that sense, it’s something of a stunt to call attention to what Rolls-Royce and its partners can do in terms of building electric propulsions systems that other companies may want to one day buy.

The plane looks different from other electric aircraft in development. Multiple companies are working on creating electric air taxis that can take off and land vertically, like helicopters, with an eye towards transporting paying passengers in the future. Those firms include Joby, Kitty Hawk, and Archer and are part of a sector called urban air mobility; they’re not trying to break records so much as start operating Uber-like services in the sky.

Parr says that down the road, they would like to sell propulsion systems to companies working on air taxis or small commuter planes who might not want to develop those systems in-house. “My goal, at Rolls-Royce, is to go and develop propulsion systems certified for the market [in] 2025, and enable those aircraft to fly,” he says, “whoever the airframer is.” In short, the same kind of tech that’s powering this little speedy Rolls-Royce aircraft could someday power an electric air taxi.

Watch the aircraft’s first flight, below:

Update: This story has been updated to clarify that the aircraft has now flown three times, not two, and that the top speed it has hit is now 265 mph.