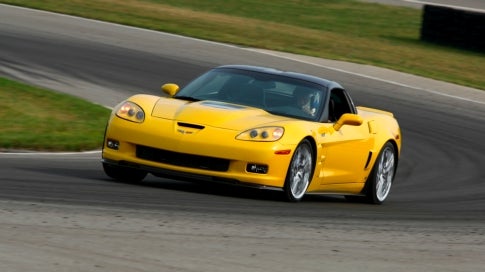 Leading with a headline-grabbing horsepower figure, the ZR1 delivers sharp, predictable handling, unjarring road feel and performance as barmy on pavement as on paper, all without artifice or intimidation. Yes, it’s a Corvette, and while that may confound anyone who assumes the badge signifies rough trade, the ZR1’s excellence won’t surprise anyone whose watched GM’s Corvette program evolve over the past decade.

It isn’t the first Corvette to wear the ZR1 badge. The name also applied to a rare racing package in 1970 and the better-known “King of the Hill” Corvette in the early 1990s, powered by a Lotus-designed V8. The ’09 is nonetheless a Corvette of firsts. With a base price of $105,000, it is the most costly Corvette in the model’s history (and the first over six figures). It’s also the first to break 200 mph right out of the factory, and the first boosted by a supercharger, or for that matter, artificial aspiration of any kind.

The ZR1 produces momentous car-geek numbers: zero to 60 in 3.4 seconds, a 205-mph top speed, 7.26 seconds around Germany’s Nürburgring, 638 horsepower, and 604 pounds-feet of torque. To put it in context, there’s only a factor of 0.001 between the ZR1 and being punched in the face by Kimbo Slice.

Certainly, the ZR1 surpasses the previous flagship Corvette Z06, which since 2004 has occupied a stratum of high-performance cars costing twice its $72,000 price. But whereas the edgy Z06 can be riotous, the ZR1 embodies Theodore Roosevelt’s principle of speaking softly and carrying a 600-horsepower supercharged V8 in your pants. Plus, you just know the world has gone a bit flatsided when the 505-horsepower Z06 feels underpowered. 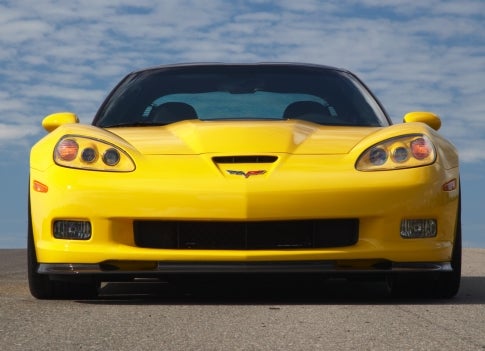 2009 Chevrolet Corvette ZR1: Horsepower, Comfort and Did We Mention, Horsepower

Let’s forget for a moment exactly how much power the ZR1 has. OK, that’ll do. It’s 638 horses, enough to pull 80 Budweiser beer wagons. Stomp the gas and a few seconds later you’re wondering why some guy with a funny accent is asking to see your passport.

ZR1’s power delivery is smooth and linear, belying the Roots-type supercharger and integrated liquid-to-air charge cooler, which peeks through the ZR1’s polycarbonate hood window like a H.R. Giger-drawn waffle iron. Never before has an engine-and-compressor combo felt more united in its power proposition. Part of the credit goes to Eaton, whose latest four-lobe supercharger design is less parasitic than previous incarnations, meaning it saps less engine horsepower from the 6.2-liter V8 to run the compressor. All told, the powerplant offers 90 percent of peak torque from 2,600 rpm to 6,000 rpm (nearly half at 1,000 rpm) and half the horsepower at 3,000 rpm. In effect, it’s all one big sweet spot.

GM brass wanted the ZR1 positioned as a daily-driver supercar, so engineers took extreme measures to tamp down the noises associated with high performance. For instance, they scrubbed the supercharger’s characteristic whine out of the ZR1’s engine note by adding twice as many drive-gear teeth to increase the sound frequency (if you see packs of dogs following the ZR1 around town, you’ll know why). The downside is a general lack of the visceral attitude one might expect from a car with nearly as much horsepower as a Ferrari Enzo. That is, until an exhaust valve opens at 3,000 rpm, and there ensues an aural discharge that would send members of Mötorhead to the local druggist’s for earplugs, ibuprofen and a copy of Quilting magazine.

Carbon-ceramic brakes from Brembo provide the kind of stoppage you’d expect from an arriving 737. These are the same high-heat-handling discs used in the Ferrari Enzo. Actually, as one engineer said, they’re the size of those on the track-only Ferrari FXX in the front and the lesser Enzo in the rear (did I just say “lesser Enzo”?). These disks get the clampdown from six-piston front calipers and four-piston rears. Corvette and Brembo techs also reworked the system to head off the squeaking and grabbing typical of racing-grade carbon-ceramic discs when cold. 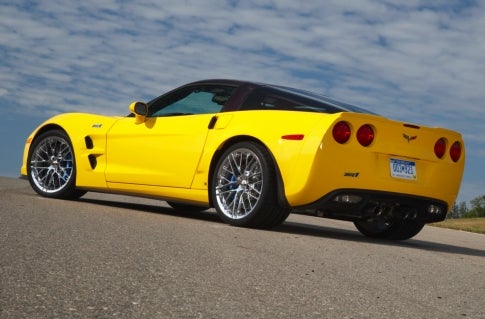 We’ve established the ZR1 can accelerate and decelerate, but to ignore its handling capabilities is to miss where the ZR1 excels. The ZR1 pulls more than 1g on the skidpad, and by the time the massive tires do break free, rear first of course, the ZR1’s controls have already offered ample tactile warnings that the end of the road is near. Also, GM/Delphi’s Magnetic Selective Ride Control is standard. It’s an ingenious device that uses shocks filled with metallicized fluid, whose viscosity can be altered by adding or subtracting an electrical charge. That means the dampers can be adjusted on the fly, within milliseconds of the car’s bank of sensors sussing out road conditions, g-forces and whatever the driver had for dinner over last year’s holidays. The ZR1 isn’t the only GM car that gets this system, but it’s tuned specifically for the ZR1. To one’s backside, it means a startlingly supple ride quality that makes the ZR1 the best long-trip supercar ever built.

Harping on the Corvette’s sub par interior has become a contact sport for car journalists, who continue raising the bar on clever metaphors for chintzy plastic. By covering most of the dash with leather, Chevy’s upped the touch quality in the ZR1 interior to, say, that of a car in the $50,000 range. Not too bad, and certainly not a deal-breaker in this case.

Ultimately, the 2009 Corvette ZR1 may never score a single kudo from kids with pictures of Lamborghinis and Elisha Cuthbert in their lockers. Japanophiles who deify the 2009 Nissan GT-R will go on posting put-downs on Internet fan forums. And Chevrolet engineers who worked the ZR1 program will still sleep soundly as kittens. Yes, the ZR1 is that good.