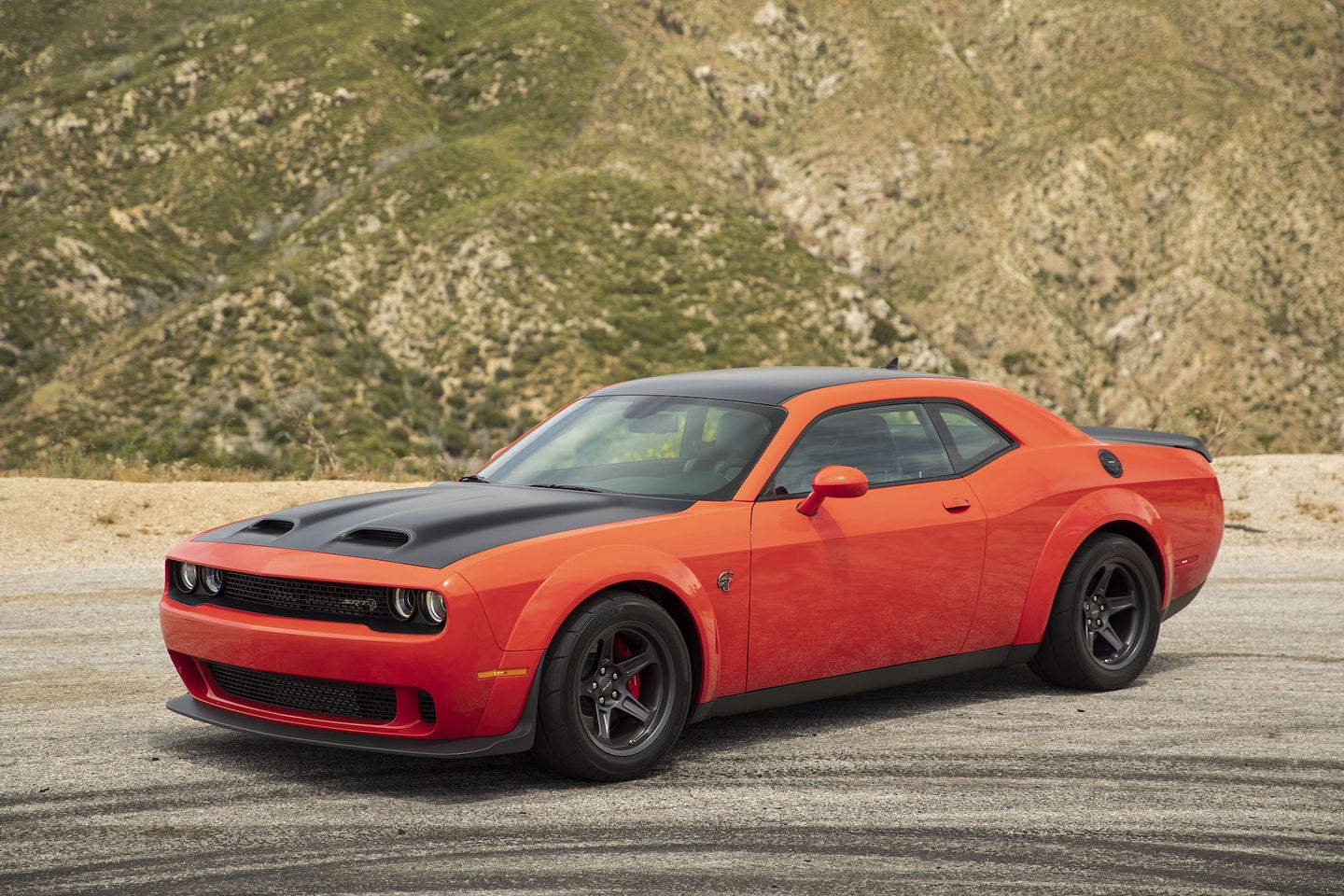 The contemporary Dodge Challenger has long been known as the most honest interpretation of a modern muscle car. Ford’s Mustang ostensibly had the segment to itself when Dodge introduced the retro-inspired machine back in 2008 (the Chevrolet Camaro had bowed out in 2002 and wouldn’t return until 2010), and by that time Ford was beginning to shift the Mustang’s focus away from its muscle car roots toward that of a more svelte, high-revving sports coupe.

Dodge chose to take a different approach when reviving the Challenger nameplate, shortening and widening their existing LX full-size sedan architecture to give the car the right physical proportions as well as a significantly larger footprint. The strategy contributed to the Challenger’s additional poundage versus its rivals, which negatively affected its performance potential, but it also endowed it with more usable storage and interior space as well as greater overall presence—factors that helped the Challenger become the top seller in its segment for the first time in history last year.

It wasn’t an overnight sensation, though. Soon after its debut the Challenger faced stiff competition from both Ford and Chevrolet as they dished out ever-more-capable iterations of the Mustang and Camaro. But over time, Dodge engineers refined the Challenger formula, and by 2018, they had a legitimate world-beater with the Challenger SRT Demon.

Billed as a drag car for the street, the 840-horsepower Demon was the quickest production car ever built, capable of hitting 60 miles per hour in 2.3 seconds on the way to a National Hot Rod Association-certified quarter mile time of 9.65 seconds. And if you got the launch just right, the Demon would even pop a wheelie.

But production of the Demon was limited to just 3,300 cars for the United States and Canada for a single model year, and it didn’t take long for Dodge to fill the order books. While the Demon’s engine and other powertrain components lived on in slightly-detuned form in the more street-friendly 797-hp Challenger SRT Hellcat Redeye, many would-be Demon customers were still left wanting a more purposeful street-legal drag car to call their own.

But now, after something of a grace period for Demon owners (along with COVID-related production delays), Dodge has unleashed the Challenger SRT Super Stock. Not bound by production limits, the Super Stock basically serves as a middle ground between the Jack-of-all-trades Hellcat Redeye and the bonkers, limited-edition Demon, and it comes packing an array of performance hardware that’s aimed at getting this Challenger down the drag strip quicker than the car in the other lane. But Dodge also insists that the Super Stock isn’t a “Diet Demon.” We decided to spend a week with the 807-horsepower brute to suss out exactly what the new package entails.

Taking its moniker from a drag-racing class designed for highly modified production cars, the Super Stock package brings a variety of upgrades that go above and beyond the standard Challenger SRT Hellcat. It starts with the big fender flares that come as part of the Widebody package, a treatment that stretches the car’s overall width by three and a half inches in order to accommodate the 315mm-wide Nitto NT05R drag radials that are outfitted at all four corners.

Those tires are wrapped around the same 18×11-inch wheels that the Demon rolled around on, rather than the 20-inch wheels that are normally standard equipment on Hellcat models. Although the smaller wheel diameter allows for more tire sidewall in the same amount of space, providing a mechanical advantage during drag racing launches, the big six-piston Brembo calipers and 15.7-inch rotors that comprise the Challenger SRT Hellcat’s standard front brake system wouldn’t fit behind the smaller wheels. In order to make it all work, Dodge engineers had to switch the smaller Brembo system that was used on the Demon, which consists of 14.2-inch discs and four-piston calipers.

The Super Stock also rides on a set of uniquely tuned, electronically-controlled Bilstein dampers that help the suspension make better use of the sticky drag tires, but it’s not equipped with the Demon’s other unique suspension components, like its drag-tuned springs and light weight sway bars. Although the Demon was civil out on the street, its suspension tuning prioritized weight transfer to rear wheels above all else for more consistent drag launches, and it resulted in less body control during other maneuvers like cornering and braking.

The Super Stock, meanwhile, gets a more conventional suspension tune that’s closer in line with the standard Hellcat Redeye, and it gives the car a more buttoned-down feel overall.

But as with all high-performance Challengers, what lurks under the hood is the real star of the show. Here it’s a modified version of the Hellcat Redeye’s supercharged 6.2-liter Hemi V8. The engine normally makes 797 horsepower and 707 pound-feet of torque, but the Super Stock gets a unique software calibration that raises the redline from 6,300 rpm to 6,400 rpm and bumps the peak output to a healthy 807 horsepower. Also along for the ride is the SRT Power Chiller that debuted on the Demon, a system that diverts refrigerant from the air conditioning system to cool air-intake temperatures for better on-track performance. All of that grunt is routed to the rear wheels through an eight-speed automatic transmission that offers different shift scheduling and overall behavior based on the drive mode selected.

[Related: Meet the Hurricane, a new twin-turbocharged engine by Stellantis]

The Super Stock also comes packing plenty of go-fast tech to help put all of that power to good use. Although it eschews the Demon’s finicky Trans Brake feature (which allows the engine to build torque while remaining stationary for more forceful launches by locking the output shaft), it does come with a variety of other tricks that are aimed squarely at getting the car to efficiently put the muscle to the pavement. Along with a standard launch control system that holds the engine revs at a specified level until you side-step the brake pedal, the Super Stock also has Launch Assist, a system that’s designed to detect and eliminate oscillations in the rear suspension as the car is accelerating.

Also on hand is Torque Reserve, which allows the supercharged engine to build boost pressure while the car is stationary, and a Race Cooldown mode that’s designed to minimize the effects of supercharger heat soak by keeping the engine fans and low-temperature circuit coolant pump running after the engine has been shut down. Also aiding in the pursuit of quick quarter mile times is the drag-focused Track drive mode which, among other adjustments, tweaks the shocks’ compression and rebound characteristics to provide better traction when launching the car from a standstill.

Our loaded tester vehicle ($97,711 with destination fee) was outfitted with several optional packages that bring suede-like Alcantara and real carbon fiber into the interior, but the cabin is otherwise mostly standard Challenger fare. The good news is that the Super Stock is just as comfortable for long stints behind the wheel as any SRT Challenger we’ve come across since 2015, and there’s still acres of head and leg room, even for taller passengers. And if this particular example were optioned with a back seat, it would probably be just as usable as the back seats in other Challenger models that we’ve tested, too. (Like the Demon, the rear seat of the Super Stock can be deleted for one dollar to shave off some weight for better performance. If so optioned, a cargo net is installed in its place.)

Although the Challenger’s infotainment looks a bit dated by contemporary standards, it has seen a number of hardware and software updates since the 8.4-inch Uconnect 4 system debuted in 2015. As a result it still offers an intuitive menu layout and fast response to user inputs, and the SRT Dashboard works well as a centralized pathway into all of the car’s different performance parameters, drive modes, and telemetry data. But it’s still a generation behind the latest Uconnect systems in vehicles like the Dodge Durango and Ram 1500, and it’s a bummer that the Challenger still lacks modern features like wireless Apple CarPlay.

A lot of problems seem to vanish when you push the big red ignition button, though. A cold start brings the supercharged Hemi V8 to life with a quintessential muscle car roar, but once everything comes up to operating temperature, the active exhaust system settles down to rumble that’s a bit more neighborhood-friendly.

If you can keep your foot out of it, driving the Super Stock around town in the default Auto drive mode can be a surprisingly mellow experience. The suspension isn’t quite as compliant as the Demon’s super-soft spring rates were, but the ride quality is arguably better than a standard Hellcat Redeye thanks to the additional sidewall offered by those big drag radials. Meanwhile the eight-speed automatic works quietly in the background to ensure it’s in the most efficient gear when the car is in its default drive mode.

Prod it with some throttle, though, and this muscle car reveals its true nature. A deliberate stab of the loud pedal delivers sonic savagery from the V8 and its twin-screw blower, and despite the ultra-wide drag rubber, the Super Stock will light up the tires at freeway speeds before the electronics intervene to collect everything back up.

On a drag strip surface with the right technique, the Super Stock is capable of hitting 60 mph from a standstill in 3.25 seconds on the way to a 10.5-second quarter mile time, and it won’t let up until it hits its electronically-limited top speed of 168 mph. (A standard Challenger Hellcat Redeye will blow past 200 mph before it runs out of steam, but the design of the drag radial tires limits terminal velocity to 168 mph.)

Replicating those acceleration numbers isn’t a simple point-and-shoot affair, though. Even if launch control is set conservatively for the conditions, the drag radial will still go up in smoke if the road surface or other situational circumstances aren’t quite to the Super Stock’s liking, so extracting its full potential tends to take a bit of trial and error. But if you get it right, this big coupe is capable of rivaling some of the quickest performance cars on the market today. It’s also surprisingly good in the corners thanks to the abundance of grip on tap, but the downgraded brakes keep spirited runs through the canyons fairly brief.

As with most modern Challengers, the Super Stock is really in its element when you’re out cruising or blasting down the highway. While the package brings a stronger focus on drag strip performance, the Super Stock is still more of an everyday hot rod than a purpose-built drag strip terror. And even though the platform’s age has been showing for some time now, it still delivers muscular charm by the bucketful.