How everyday engines got their boost 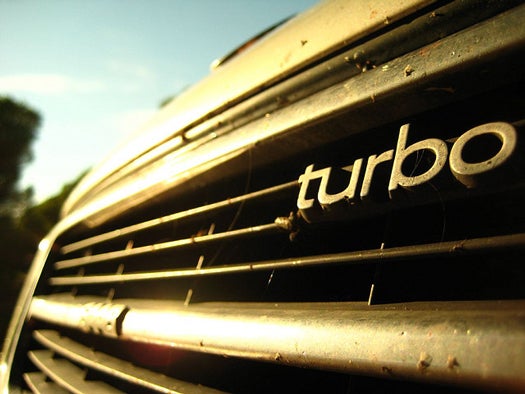 The goal of most forms of racing technology is to allow cars to go faster. Obviously. But what isn’t necessarily so clear is that speed is usually achieved by enhancing efficiency, which is why so many technological advances originally developed for motorsports have trickled down to the most prosaic street cars on public roads. Thus, disc brakes provide more stopping power at the cost of less weight. Fuel injection allows gasoline to be delivered more accurately to the cylinders. Wings redirect airflow to provide more grip for cornering.

Turbocharging is a relatively new addition to this list. Not the technology itself, which dates back nearly a century. But for several decades, turbocharging was thought to be useful only for racing, and when it made the transition to the street-car world, it was found almost exclusively on high-horsepower sports cars. Now, mainstream manufacturers are incorporating turbo-charging as a way to make small, fuel-efficient engines viable—and rewarding, from a driving standpoint—powerplants for workaday sedans and no-nonsense econoboxes.

Turbochargers take advantage of a principle known as forced induction. Generally speaking, the more air that goes into the cylinders of an engine, the more power it produces. In a normally aspirated engine, air is sucked into the cylinders as the pistons move down, much like fluid is drawn into a syringe. Early on, engineers realized they could dramatically increase power by cramming more air into the combustion chamber. So during the 1920s and 1930s, they developed a component called a supercharger, which is an air compressor geared or attached by a belt to the engine. As the engine turned, the supercharger would turn even faster, and the super-charger would force far more air into the intake manifold than a normally aspirated engine could ever manage. Superchargers, colloquially known as blowers, are still standard equipment on the Top Fuel and funny cars that dominate drag racing.

The big knock on superchargers was that the act of spinning them robbed the engine of power. So instead of using the engine to turn the blower, some clever engineers came up with the bright idea of harnessing exhaust gases to spin a turbine that forced air into the intake manifold. Once upon a time, this was known as an exhaust gas turbine supercharger, but this mouthful was long ago shortened to turbocharger. Here’s a video showing how it works:

Conceptually, the turbocharger seems like a no-brainer—a something-for-nothing solution. But turbos come with their own baggage. First of all, they generate a lot of heat, and early turbos used to melt down if they weren’t cooled properly before the engine was shut off. Second, it takes a while for the turbine to spool up, which causes a pronounced delay, known as turbo lag, between the time you step on the pedal and the engine starts to deliver power. This meant turbos worked best with engines that ran at lower speeds and at relatively constant rates. So while superchargers reigned supreme in the racing world before World War II, turbochargers were fitted to plenty of high-flying airplanes. This Army Air Forces training film provides some technical details:

After the war, engine manufacturers realized that turbos were a good fit for the low-revving, heavy-duty engines found in commercial trucks. To promote this new technology, Cummins developed a turbocharged diesel for the Indianapolis 500, and it qualified on the pole in 1952. Indy proved to be a good venue for turbocharged engines since the high-speed nature of the track meant turbo lag wasn’t a showstopper. Turbos allowed venerable Offenhausen engines—whose basic architecture dated back to the Great Depression—to win Indy in 1968, and continue winning at the Brickyard until 1976. The following year, Renault introduced the first turbo-charged engine to Formula 1. Two years after that, Renault won its first Grand Prix, and by the end of the next decade, turbocharging was standard equipment in F1. Watch one of these beasts–good for up to 1,400 horsepower in qualifying trim–in action:

Lamentably, the qualities that made turbos so successful on the racetrack didn’t translate very well to daily drivers. GM marketed turbocharged versions of the Chevrolet Corvair and Oldsmobile Jetfire in the 1960s, but both were dismal failures. The Mercedes-Benz 300TD turbo diesel, introduced in 1978, is generally considered to be the first successful production vehicle to feature turbocharging, and even it was an acquired taste. But modern units are so sophisticated that neither turbo lag nor excessive heat are major issues. In fact, a lot of people could drive cars equipped with today’s turbocharged engines and fail to realize that they had a blower under the hood. Or realize that their motors contained technology that originally was proven on the race-track.