How ‘Metal Gear Solid’ Helped Turn An Amputee Into A Maker 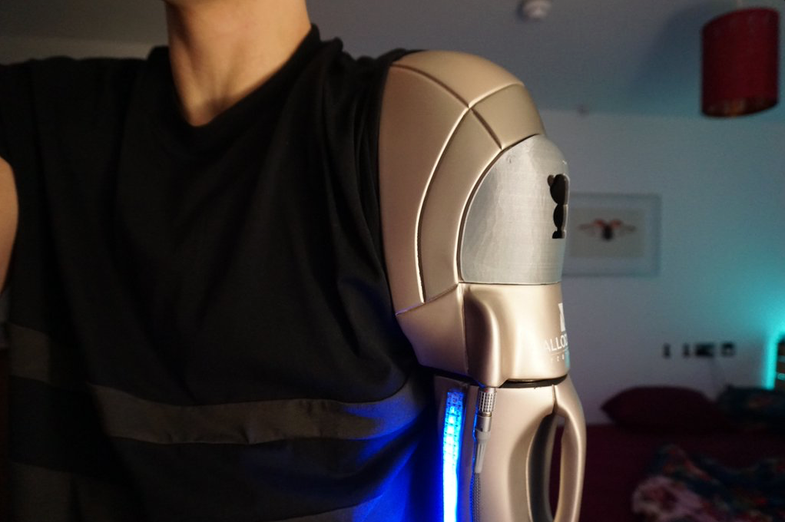 James Young’s bionic arm will be Bluetooth-enabled, with a screen to control his electronics. It has a laser and a torch, and it can fly drones. But it has trouble picking up a grocery basket.

After losing his arm and leg in a commuter rail accident four years ago, he applied to receive a bespoke and partially 3D-printed “art arm” as part of a project called Phantom Limb, inspired by the video game Metal Gear Solid and funded by game company Konami. The arm has changed Young’s life.

Still, the limitations of the Phantom Limb, which was created on a fairly tight budget and deadline, mean there’s only so much function he can get out of it. Now Young is trying to hack it and his own body to make something even better.

Young is a slender, tall, 26-year-old goofball, with short hair and big eyes. When he was hit by a commuter train, his doctors needed to amputate half of his left leg and all of his left arm, save a fleshy stump near his shoulder. Today, he lives in an apartment in London, where he gets around his large room either on his prosthetic leg or by rolling on an office chair. He speaks quickly, earnestly, and passionately, and his energy is what got him selected to receive the limb in the first place.

“I was super pumped to get involved. I put together an application in 24 hours because I didn’t want to miss the opportunity,” he told me.

The project director, prosthetic sculptor Sophie de Oliveira Barata, agreed. “James really stood out. He seemed really enthusiastic and had a keen interest in technology and biology. He had some cool ideas himself. We met up with him and were really happy with him from the start.”

After a year and a half of designing and machine-shopping, a team of around 11 engineers and artists, led by de Oliveira Barata, debuted Young’s Phantom Limb at the Inaugural Body Hacking Conference this past February in Austin, Texas. De Oliveira Barata is a renowned prosthetic limb sculptor who founded the Alternative Limb Project in September 2011 to encourage artwork and creativity with prosthetic limbs. Young’s Phantom Limb “was the biggest project that I’ve coordinated,” she said, but she’s also worked on other bespoke limbs, like the one worn by amputee performer Viktoria Modesta at the 2012 Paralympics closing ceremonies.

The Phantom Limb looks powerful. The light caramel-colored matte metal limb secures to Young’s torso with a harness and network of black straps. There’s a quadcopter dock, and compartments conceal screens, charging ports, and a laser light. People approach Young on the street to ask about the limb. The project recast prostheses as something that can be celebrated and discussed, rather than hidden.

“From a rehabilitation point of view, it’s a fascinating idea, bringing a sense of personality to the limb and ultimately ownership and pride,” de Oliveira Barata says.

“I saw James’s lights, and now I have a Bluetooth speaker and lights and a GPS tracker chip, because why not?” Young’s close friend, actress Angel Giuffria, told me. Giuffria is a congenital amputee, born missing her left forearm and hand, and has worn a prosthesis since she was six weeks old. “[James’ arm] is so visually appealing — holy crap, it’s cool.”

Giuffria spotted some of the Phantom Limb’s drawbacks immediately, though. Her own day-to-day prosthesis is a black carbon-fiber forearm, lighter than plastic, with silicone padding that rests on her elbow and a small, nimble Bebionic hand. Young’s hand, a prototype, was not as strong as hers. A cord snapped in his finger while he picked up a grocery basket. The ten-pound arm hung heavily on Young’s shoulder, and the stick-on myoelectric sensors slipped off the sweat on Young’s back, preventing him from fully controlling his own 3D-printed bionic hand.

Many arm amputees have at least some stump to work with, some piece of arm muscle they can flex to activate their myoelectric implants, electrodes attached to the skin that can make a prosthetic device move. Not Young. “There’s fundamental issues with the way I work with prosthetics. I don’t really get along with them because I don’t have any arm left.”

While he had some control over the project’s vision, Young also needed to work alongside the team to accomplish what was possible and affordable with a £20,000 budget and under the stress of deadlines. “I think perhaps people may look at James’ arm and think that because … it looks like something out of a sci-fi movie, he must have the strength of a hundred men,” de Oliveira Barata told me later in an email. “But actually, basic-looking arms with such hardware are in the region of £80,000 to £150,000, and this is without bespoke designing.”

The final product was visually stunning, but incomplete. The bionic hand was an afterthought that wouldn’t be perfectly compatible with the limb and its electronics. “We just stuck a bionic hand on the end of our design,” Young said. He looked like a cyborg but couldn’t play the part.

As de Oliveira Barata says, Young’s arm is still a work in progress, and he plans on finishing it. I asked him to show it to me on our Skype call. He could barely answer my questions once the metal mass sat in front of him, he was so focused on fixing individual parts. “Something seems to be creating noise in the electrode’s reading ability, in the signal it gets from the muscles,” he said. “We don’t know if it’s my skin or the electronics, so we really need to spend a few days doing quantitative analysis of everything rather than just trying something else.”

The project has thrown Young into the maker and biohacking communities, where people are looking to use tools like 3D printing to enhance their bodies. 3D-printed bionic hands epitomize the intersection of those worlds. Young already knew how to wire electronics, but has since learned basic coding in C++ and Tinkercad software to operate 3D printers.

Open Bionics, the company that made Young’s prototype hand, debuted its own video game-inspired black and gold Deus Ex 3D-printed bionic hands this month. Sammy Payne from Open Bionics told me that the hand’s fingers can arrange themselves in as many different ways as Giuffria’s Bebionic hand. And the Deus Ex-inspired hands are open-source, so the only expense is printing them. Those without 3D-printer access can pay £500 for Open Bionic’s Ada hand kit. Payne thinks 3D-printed limbs will soon beat the astronomic cost for advanced arm prostheses, especially in the United States, where insurance companies might not cover a bionic limb. Giuffria saw this problem first hand: her insurance carriers would reject claims because they didn’t see why she’d need bionics, or specialized limbs for sports.

Giuffria and her prosthetist, Rob Dodson of Advanced Arm Dynamics in Texas, pointed out that many prosthetists see more leg patients than arm patients, so they don’t have as much experience fitting arm prostheses. They might offer uncomfortable options, and the patient’s insurance might only cover skin-colored, uncanny-valley limbs powered by strings with hook hands, he thought.

Dodson also foresees that 3D printing will bring a revolution in prosthetic devices. “If you can build your prosthesis in virtual reality, say ‘that’s what I want it to look like,’ print it, and go, that’s cool. I can’t wait till that system is in my office.” But today’s 3D-printed prostheses have drawbacks. Makers and body hackers don’t necessarily have experience fitting amputees with prosthetic 3D-printed arms, and the devices they build might not be approved by the Food and Drug Administration.

And limbs like Young’s could look sophisticated but function worse than other limbs on the market. “Looking cool wears off. If the prosthesis doesn’t fit a need for a person, that’s when someone says ‘I don’t need a piece of plastic. I’ll just use my other hand.” said Dodson.

Young shrugged all that off. He’s determined to make an arm both functional and beautiful with the tools he’s picked up, even if it means starting from scratch. He’s getting help from whoever will listen, and is raising money for titanium implants that will sit directly on his bone and allow him better control over his hand than stick-on pads. He’s left his job, and gives talks at conferences about alternative limbs and about the Phantom Limb.

“The arm has set James up as an ambassador for personalized limbs,” said de Oliveira Barata. “It’s given him an opportunity to stand and tell his story, fundraise for implants, and pursue a different career path, which is much more than we hoped to achieve.”

When Young wears his arm in public, he doesn’t forget about what his and de Oliveira Barata’s creation has done to put prosthetic limbs in front of the public as a conversation starter, rather than as an accessory to a disability.

“When I get other people’s reactions, it’s amazing,” he said. “It’s so infectious when people are mind-blown or can’t speak. It’s incredible and it’s so nice. That must mean we’ve created something that’s visually stimulating, and that’s the purpose of it.”