How I Converted My Mercedes-Benz To Run On Veggie Oil 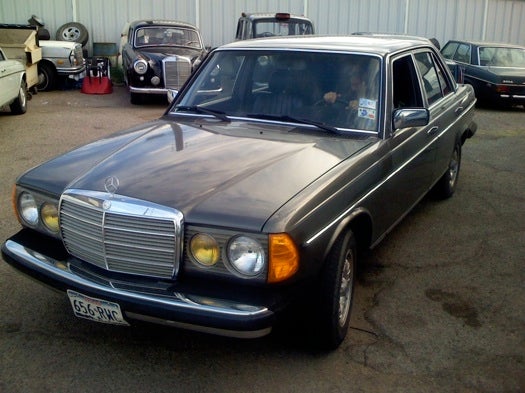 Without any sort of approval from my girlfriend, I bought a 1984 diesel Mercedes-Benz through eBay. Two years later, the vehicle has provided me with nearly 10,000 miles of service on waste vegetable oil (WVO). The fuel may technically be free, but it has not come without a price. Here’s how I converted my car, affectionately known as “Chance,” to a veggie-oil roadster, and some of the hard-learned lessons I picked up along the way.

I started with a WVO kit from Frybrid. This company sells a rather high-end (~$2,000) setup for my model of Mercedes. The primary components are: 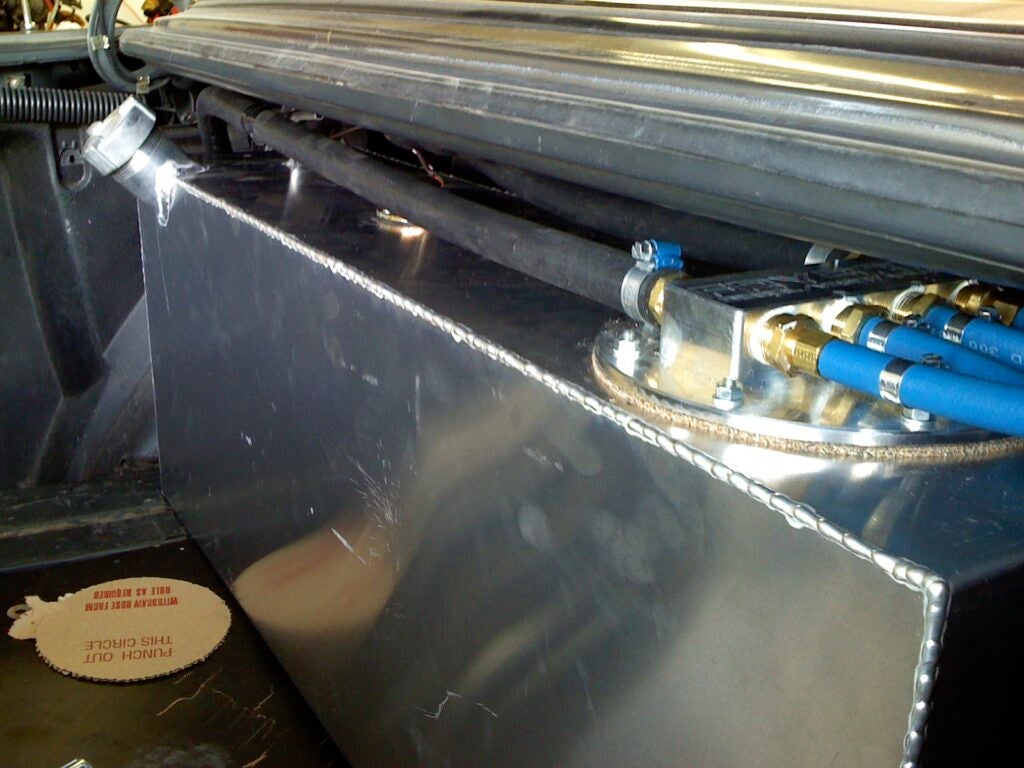 The idea is simple enough: Place a second fuel tank in the trunk and wait for the vegetable oil to reach a combustible temperature of 160°F. The temperature is important because vegetable oil is much thicker than diesel at room temperature, so you have to get the viscosity thin enough so the pumps and injectors can move it. By tapping into the car’s radiator hoses, the engine heat can be transferred through heat exchanges to warm the vegetable oil. Frybrid provides a reasonable kit, but to be honest, I wouldn’t do business with them again, as their customer service wasn’t the best. My system came with a faulty temperature sensor that I was unable to get replaced. 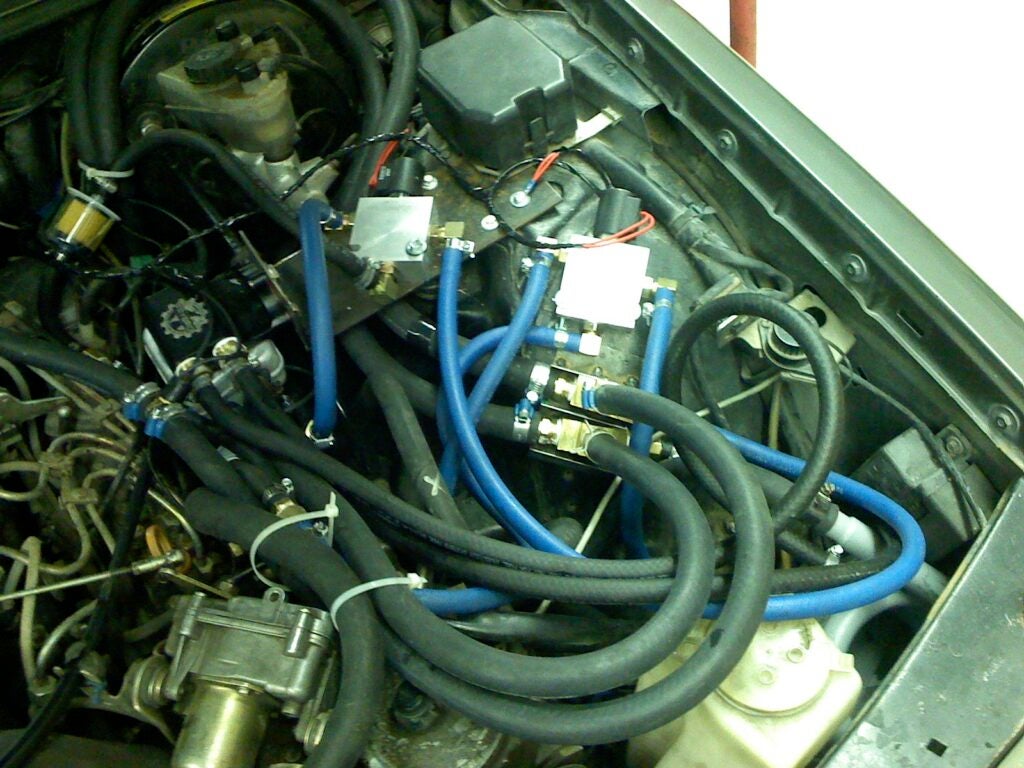 Under the hood – A mess of fuel hoses and solenoid valves

My conversion took one week with the assistance of a professional diesel mechanic. It was a stressful process ripping apart the car and just hoping that everything would work in the end. Having a mechanic around to offer tips, tricks and tools, and to make minor repairs on the ancient vehicle, helped quite a bit. I don’t recommend taking on your own conversion if you’re not already well versed with the automotive world. The downside of having a mechanic around is the cost (~$1,500).

Here are a few other bits of advice for anyone else considering such a project.

Do not buy an old car.

I’m not kidding — this was the single biggest mistake I made. Burning veggie oil is just a matter of heating and filtering, but keeping a 25-year-old car on the road is an entirely different challenge. If I were to do it again I would buy something made in the last 10 years that was well taken care of. I have spent just as much on repairs totally unrelated to the veggie oil as I did on the entire vehicle + conversion + installation. At this point the door locks do not work, the A/C and heating in the cabin are unreliable, the stereo is dead, and the odometer has been stuck at 86,000 miles probably sinces the early 1990s. 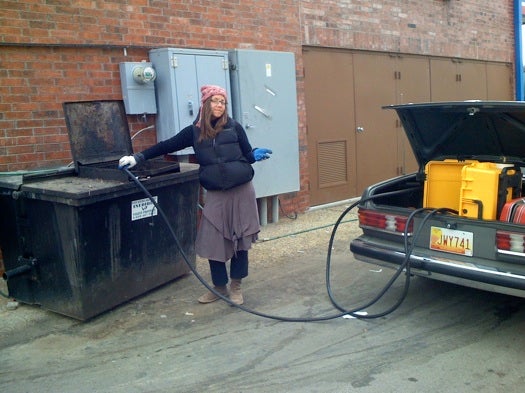 My girlfriend pumping waste oil behind a gas station in Marfa, Texas

Oil collection and filtering is a skill.

I have an overpriced gear pump setup called the one shot. I like it because it’s self-contained in a Pelican suitcase, and includes a high-quality filtration system. But getting clean oil that won’t clog the vehicle’s fuel filter every 300 miles takes more than just this hardware. I like to collect oil from a local restaurant and let it sit for 30 days. Then I run the oil through a highly technical denim filter (literally old jeans from the thrift store). Finally, I use my one-shot to filter the remaining particles down to two microns out of the oil.

Lots of folks mix up the difference between WVO and biodiesel. Biodiesel is made through a chemical process usually combining lye and methanol with waste vegetable oil that causes the glycerin to drop to the bottom and leaves the lighter biodiesel to be poured off the top. I purchase methanol from a local car-racing supply store and lye from a pet-food shop to make biodiesel at home. It costs me roughly a $1 per gallon and prevents me from having to purchase diesel fuel for the cars stock tank. Just be careful: Both methanol and lye are hazardous. 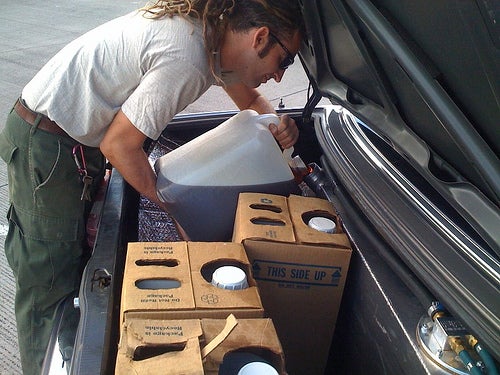 Refilling the veggie tank during a road trip

Making your own fuel and converting a car is an adventure, and that’s really the primary reason to do it. Once you take into account the materials you need to buy and the time involved with maintenance and fuel production, I’m not sure that a real savings can be found. In my next post about Chance, I’ll include some performance data looking at one year of driving on WVO.