That'll learn those fatcats. Because we'll all be able to see how fat they are. 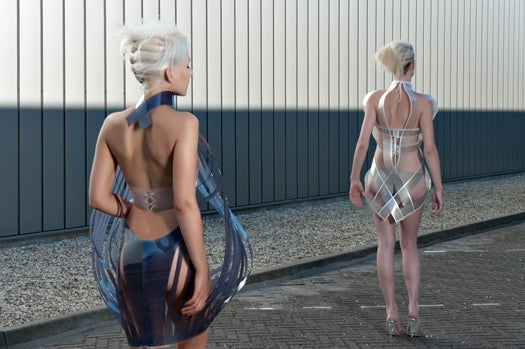 Studio Roosegaarde, led by designer and vowel aficionado Daan Roosegaarde, is one of our favorites; we’ve previously followed the studio as it introduced “the Route 66 of the future,” equipped with lights and warnings and pictures of snowflakes. PSFK had a talk with Roosegaarde about another undertaking, the Intimacy Project.

The Intimacy Project is concerned with “smart fabrics,” essentially wearable gadgets that perform various functions. These fabrics can interact with light, sound, and electrical current and seem mostly concerned with becoming transparent or opaque. According to Roosegaarde, this is accomplished with “electrically-sensitive foils,” though there’s no additional information as to how they work.

Previous coverage of the Intimacy Project only showed the sexy women’s wear, which makes a statement about…something…by turning transparent when hit with a powerful beam of light (like, say, a photographer’s flash). They can also change according to how “excited” the wearer is. But Roosegaarde cheekily notes in the PSFK video that the team is also working on menswear–a business suit that turns transparent when the wearer lies. Lie detection is actually fairly well-suited to clothing; polygraph tests, the most commonly used form of lie detection, rely on bodily functions like perspiration and heart rate, which could be easily measured with clothing that rests against the skin.