How do you secure an event like a big-city marathon? 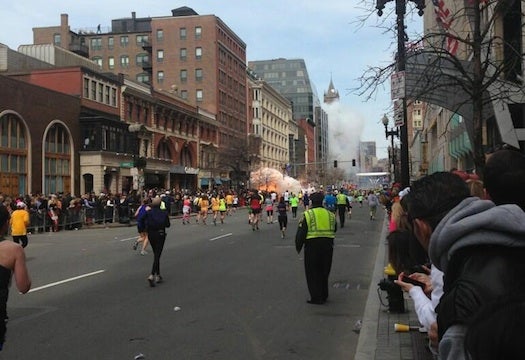 Explosions at the finish line at the Boston Marathon this afternoon got us wondering: What is the security typically like for marathons? It turns out surveillance is tight during marathons in major cities. Meanwhile, the events in Boston have already prompted some reactions in New York and London.

In 2008, homeland security expert Arnold Bogis wrote an op-ed for the Boston Globe describing how city officials use marathons and other popular events as testing grounds for emergency preparedness measures. For example, Boston Marathon officials have tested a barcode tracking system for runners during previous races. During this year’s race, runners wore chip-based trackers that friends and family may now check on the Boston Marathon website.

Organizers of the London Marathon, set for Sunday, April 21, are reviewing their security measures, the Associated Press reports.

While cellphone service may be spotty because of heavy call traffic, Verizon and Sprint officials say they haven’t received any shutdown requests, the AP reports.

Two blasts went off in quick succession about four hours after the start of the men’s race today. Many runners were still crossing the finish line at the time, and spectators were lined up in the area. Twenty-three people were injured and two people died, the Boston Globe reported at about 4:24 p.m. local time. And officials have found and dismantled additional devices.

An unnamed senior counterterrorism official told the New York Times that it’s too soon to tell if the Boston Marathon blasts are terrorism-related.