Watch This Baseball-Playing Robot Learn To Hit Every Pitch

Give this guy a baseball contract, stat. 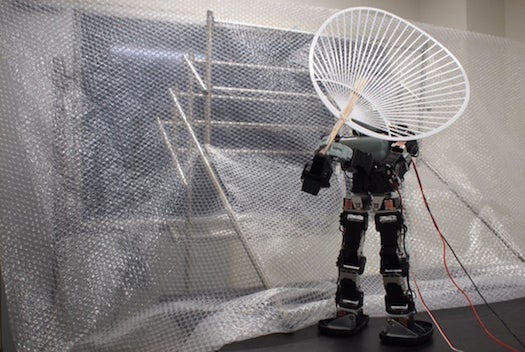 There’ve been a few attempts recently to build robots that function sort of like the human brain: artificial intelligences that “learn” from their mistakes. It’s a fascinating idea, and we could eventually use what we learn from the robots to better understand our own brains.

But! Can these robots play baseball with an oversized fan-thing?

Yes, they certainly can, thanks to a team of Japanese scientists that created this robot with an artificial neural network. A batting cage behind the robot has an accelerometer that measures where the ball in this video is flying, then sends the information to the robot, which uses an artificial “brain” based on a graphics processor unit, or GPU, to adjust its swing–certain faux neurons fire or don’t fire based on how close it was to hitting the ball. Eventually, if the flight path is consistent, the robot will knock the ball right out of the park.

Now when it inevitably breaks the home-run record, will officials have to put an asterisk next to its name?