A Robot With Heart

Using cardiac cells as a motor. 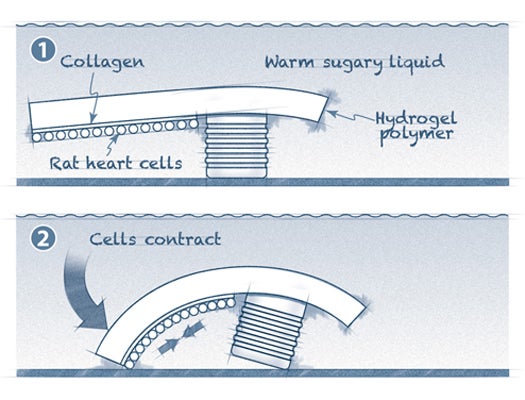 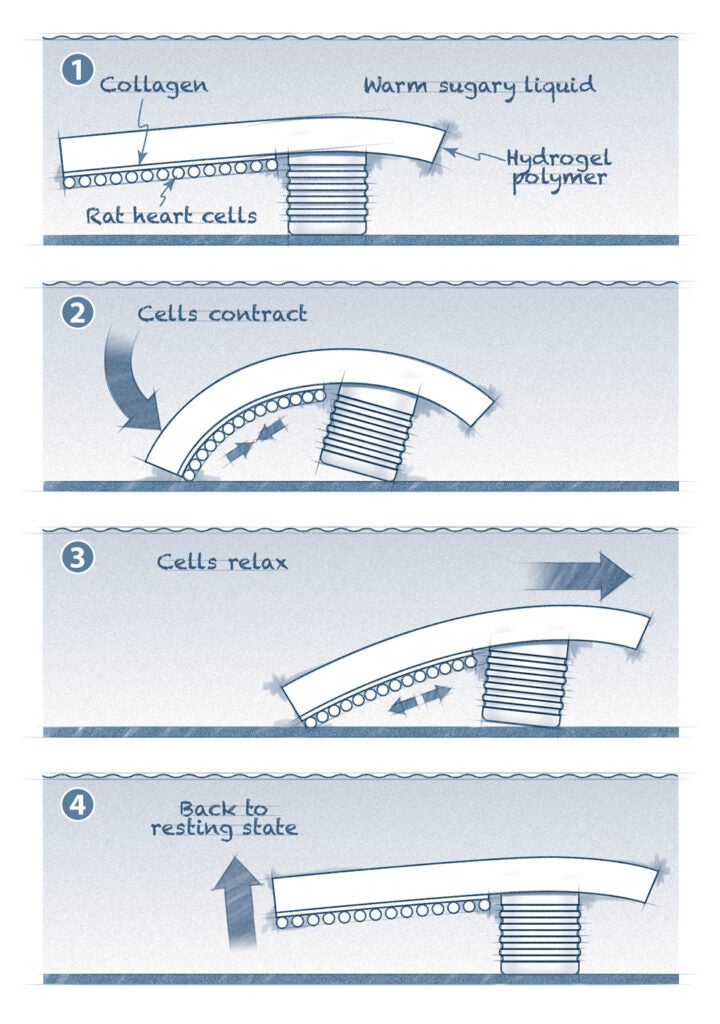 A Robot With Heart Diagram

“Our miniature bio-bot is made of a flexible polymer and living heart cells. The cells beat together, creating a contracting and releasing motion that inches the bot forward. We use a 3-D printer to build the bot’s body layer by layer out of a hydrogel—the material contact lenses are made from. It’s about a centimeter long, with a flexible leg that rests on a shorter leg like a cantilever. We also print collagen on the underside of the long leg so that the living cells can attach to it.

After printing, we bathe the structure in a solution of rat cardiac cells and support cells called fibroblasts, and the cells attach to the collagen-infused area. We store the bio-bot in an incubator that is 98°F (about the body temperature of a living rat) and that has proper CO2 levels for the cells to survive. A few days later, the growing cells form a sheet and start beating about once a second—the rate that a rat’s heart beats. Each contraction bends the longer leg down, propelling the robot forward. The whole thing moves about 15 millimeters per minute (and only in one direction). In the future, we’d like to try bird heart cells, which beat five times as fast as rat ones and thus might make the bio-bot faster. We’d also like to make the robots more intelligent, so they could assist in surgery or be used to find toxins or parasites and release chemicals to neutralize them.

We think this work moves synthetic biology and bioengineering forward. Instead of reengineering DNA or a single bacterial cell, our goal is to put different types of mammalian cells together, see which behaviors emerge, and use those behaviors to accomplish tasks. But it also raises new ethical questions: Is this alive? As long as the conditions are right, the bio-bots could keep walking around their petri dishes for months. How do we feel about that?”

—Rashid Bashir, a bioengineer at the University of Illinois at Urbana-Champaign. As told to Flora Lichtman