The Most Powerful Supercomputer Of 2009 Is Already Obsolete

Roadrunner, the first petaflop computer, is being decommissioned at the ripe old age of five. 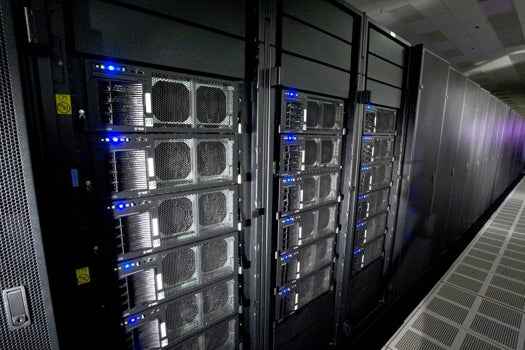 Computers grow up so fast these days. The Roadrunner supercomputer, once the fastest computer in the world and the pride of Los Alamos, had a rich and full life. Born in 2008, it broke the Petaflop barrier, paved the way for hybrid supercomputers, and this weekend retired at the ancient age of five.

It turns out Moore’s Law, which roughly predicts a doubling of computer power every two years, is especially harsh on the computers at the cutting edge. Within a year, a new supercomputer named Jaguar (sadly, not Coyote) had stolen Roadrunner’s title as the fastest machine on the planet. Since then, Jaguar was unseated by Tianhe-1A, a Chinese supercomputer, which in turn fell before the might of Japan’s K Supercomputer. Turns out the petaflop speed record game is cutthroat.

Records are cool, but what’s cooler is the work Roadrunner did after breaking them. Not a machine to rest on its laurels, Roadrunner researched nanowires, magnets, laser backscatter, HIV, and ran a “simulation of the universe at a 70-billion-particle scale.” Awesome as all that research is, for Roadrunner it was more of a hobby and a side-project.

As a Los Alamos National Laboratory computer, Roadrunner’s original purpose was nuclear weapons modeling and simulation to “assure the safety, security, and effectiveness of the U.S. nuclear deterrent.” Los Alamos as a town really came into being for the Manhattan Project, and since then has served as one of America’s top nuclear research sites for decades, benefiting from the Cold War, an incredibly well-educated populace, and for decades an awesome cross-party Senatorial tag-team that ensured constant funding and evolution of the lab’s purpose.

Though Roadrunner’s main work is over, Los Alamos researchers plan to spend a month with the decommissioned machine testing memory comprehension techniques in supercomputers—something they could never do while the computer was operational.