Meet The Robotic Salamander That’ll Walk, Swim, And Crawl Into Your Nightmares

Inspired by everyone's favorite lizard-like amphibian, Salamandra can transition seamlessly from water to land and back again. 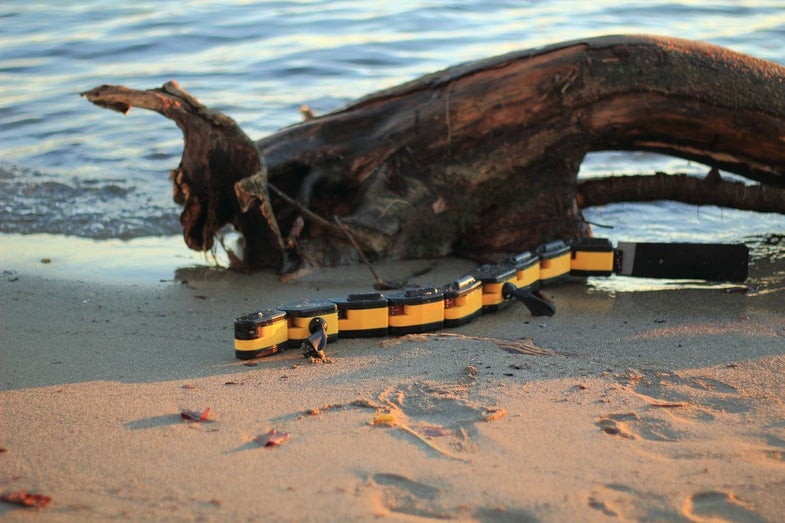 Do you remember turning over rocks in your backyard, looking for tiny dark wriggling salamanders? Imagine that, but in the form of a very large robot, and you’ve got something close to the Salamandra Robotica II.

The Salamandra is the newest amphibious robot from the biorobotics department at the École Polytechnique Fédérale de Lausanne. Biorobotics is a thriving subsection of the study and creation of robots; we’ve written before about all the ways the natural world inspires the way we create artificial items. The Salamandra is notable for being able to seamlessly transition from water to land, just like its real-life inspiration.

The Salamandra is constructed of a long chain of interconnected motors with four “legs” jutting out from the sides. Unlike mammals, whose legs tend to be underneath the torso, amphibians and reptiles tend to have legs that stick out from the side, keeping their center of gravity low to the ground. And the Salamandra does move in a way that’s totally evocative of the salamander, especially in the water–the way it propels itself by whipping its torso from side to side is just like the way amphibians and aquatic lizards swim. That’s also the way it “crawls”–the difference between crawling and walking seems to be that crawling is done on the belly, squirming back and forth, while walking is performed with the legs.

It’s not totally clear why the team is working so hard to create a salamander-type robot; they speculate that it could be used to study locomotion systems, or possibly for search-and-rescue operations, though it doesn’t seem as though the latter idea really played into the planning of the Salamandra. Still: cool robot! Check out a video of it in motion here.