Watch This Snake Robot Grip Whatever It Touches

Just stay away from our necks, snake 'bot. 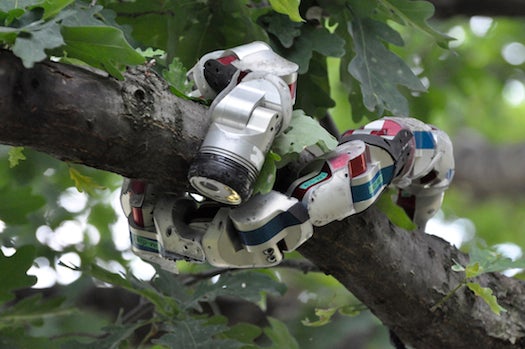 We’ve seen Carnegie Mellon University’s modular snake robots before, and it looks like one of them has learned a new trick. Throw it at a tree branch or field goal post or some other cylindrical object, and the ‘bot will wrap itself around it, holding on wherever it lands.

Accelerometers in the snake’s body detect when it runs into an object, and when it notices it’s hit something, wraps around it. Why does it do that? Uh, well, this is part of the statement from the researchers.

It’s important to note that there is a difference between wrapping and constricting—this robot snake does the former, but not the latter—it doesn’t squeeze the target, it simply wraps itself around it to allow it to hold on. Though, it’s not beyond the pale to consider that constricting could also be added to the snakes’ abilities, especially when noting that the U.S. Army Research Lab is paying for the research. The researchers on the project don’t divulge what sort of objectives the Army may have in mind for the snakes and thus any theories on their use (such as, as a weapon) at this time would be purely speculative.

At least some of the other snake ‘bots are meant for rescue purposes?