After three months growing in the lab, it looks and acts more like a natural ear than any previous attempt. 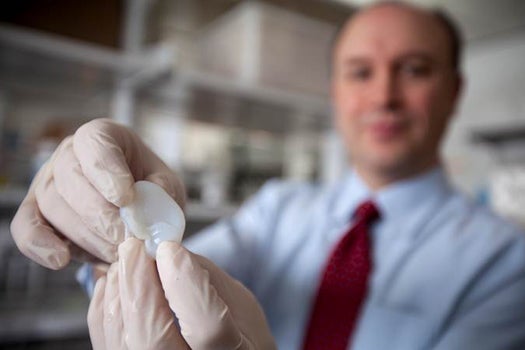 Researchers at Cornell University have managed to fabricate a bioengineered human ear that looks and acts like a natural one. They hope to be able to give children with a rare congenital ear deformity a new, 3-D printed ear that’s specifically tailored to fit them. 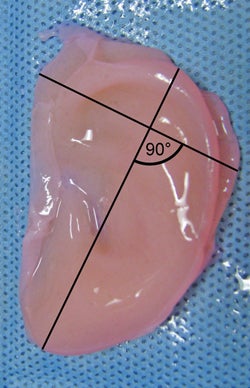 Children with microtia are born with a deformed or missing external ear, sometimes without even an ear opening. Although they can have a fully-formed inner ear, it’s difficult for them to hear without the external structure to direct sound, to say nothing of the psychological impact of having a prominently visible deformity. Typically, treatment for microtia involves multiple surgeries over several months or years, often using cartilage from the child’s ribcage.

There are many drawbacks to this approach, including a limited supply of cartilage that can be taken and complications that occur at the site where it’s harvested from. Scientists have long been looking for a way to engineer new tissue for reconstruction, but previous attempts at bioengineered ears lost their shape over time or the cells within them died.

Over three months of observation, Cornell researchers found that their 3-D printed ear was more flexible and longer-lasting than other bioengineered ears. Using 3-D printing also would allow them to mimic the normal anatomy of the patient’s ear, since children with microtia usually only have deformities on one side.

They used a laser scan and panoramic photography to create a 3-D image of a 5-year-old girl’s ear (taking all of 30 seconds), then made it into a mold and filled it with a dense animal collagen (taken from rat tails) and 250 million cartilage cells harvested from cows.

The PLOS ONE study’s lead authors have been working on bioengineering human tissues for reconstruction since 2007. Cornell bioengineering professor and co-author Lawrence Bonassar explains part of the 3-D printing process in the video below:

The whole process takes only a few days. After removing the ear from the mold, researchers trimmed it and let it culture before implanting it into the back of a rat. After just a week, the researchers reported that the fabricated ear seemed more like a natural ear than any previous attempts. After three months, the cartilage cells grew to replace the animal collagen scaffold. All that remained was the cartilage that would be found in a natural ear.

The bioengineered ear would likely be implanted before the child’s ears were about 80% of their adult size, when they’re around 5 or 6 years old. It’s not yet known if the implant would continue growing with the child, but co-author Jason Spector theorizes that it might. The malformed ear would be removed and replaced with the implant in surgery.

“I believe this will be the novel solution reconstructive surgeons have long wished for to help children born with absence or severe deformity of the ear,” Spector said.

The researchers hope to be able to use human cartilage cells in the mold in the future. They estimate that within three years, they’ll be able to test the first implant in humans.