Before sending any people in, police sent two robots to check out an Ohio shooter barricaded in his house. 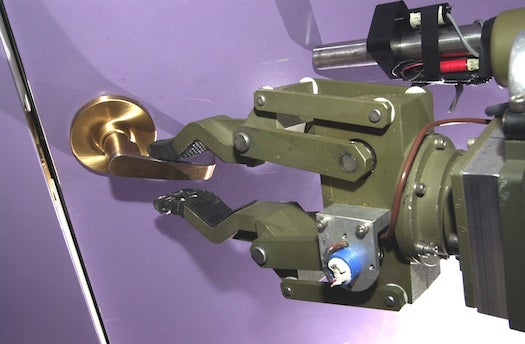 An Ohio man has been charged for shooting a robot.

Michael Blevins was charged with vandalism of government property, after drunkenly firing at a police robot in his house. Perhaps what’s more interesting is that the police used a robot at all.

On February 23, police responded to a call that 62-year-old Blevins was making threats and had fired a gun in his home, the local Chillicothe Gazette reports. When police arrived, Blevins refused to answer the door.

After verbal negotiations failed, police sent two robots into Belvins’ house instead of human officers because they believed Blevins had a lot of firearms. Blevins allegedly shot the larger of the two robots with a pistol.

Police eventually arrested Blevins, whom they reported as being highly intoxicated, and searched his house with a warrant. They found two AK-47-style rifles and a 75-round ammunition drum, which is illegal to own in Ohio.

It is not uncommon for police to send robots, instead of humans, into dangerous situations, as the artificial intelligence blog Singularity Hub points out. We found several examples just over the past year:

Last March, a SWAT team sent a robot into a Utah home when a shooter inside refused to come out. The man, 25, surrendered upon seeing the robot, KSL TV reported.

In September, a Michigan standoff included dozens of exchanged shots and robots sent in to determine the shooter’s location.

Just days before the Blevins incident, San Diego police used robots to determine the exact location of a shooter in an apartment.

Or check out this weirdly silent video of a robot rolling into an Oklahoma City standoff scene last August.

In our quick search, however, Blevins was the only person who actually bothered to shoot the entering robots.

Business Insider also wrote about this case, saying, “Michael Blevins is likely just the tip of the iceberg when it comes to armed confrontations between man and law enforcement bot” and “Blevins is likely to be in a long line of libertarian ‘folk heroes’ who take up arms against perceived robotic intrusion.” We’re not so sure. So far, at least, robots seem just like a new tool for these standoff situations. They’re not exactly Robocops replacing real officers. The humans are still outside, so it seems pretty futile to shoot the robot, and the charges against Blevins reflect that. They’re just some expensive government property.