3D Heart Simulation Predicts How Drugs Will Affect Your Heartbeat

Getting to the heart of drug-induced arrhythmia 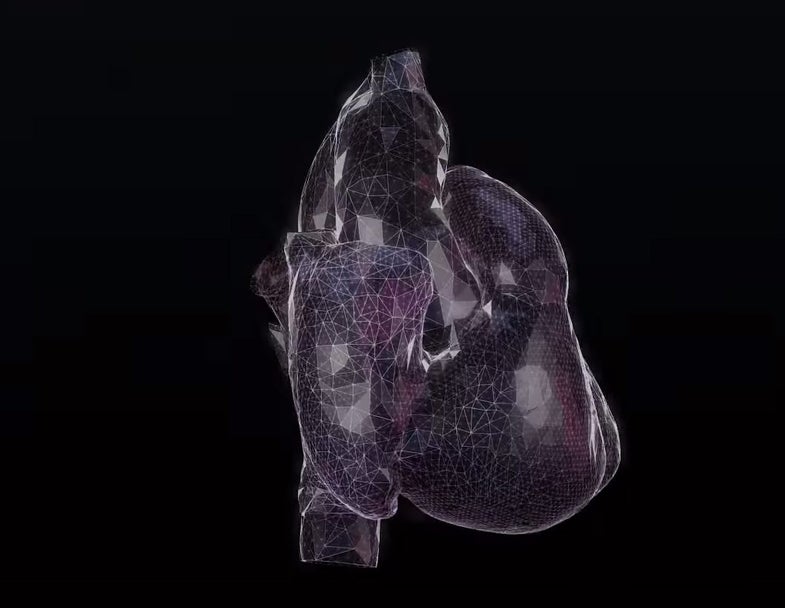 Your heart might “skip a beat” if you’re frightened or you suddenly see a long-lost love, but in real life, an irregular heartbeat can be dangerous. If the heart can’t pump enough blood to the body, it could result in organ failure or stroke. And certain prescription drugs may throw off the natural rhythm of your heart if not properly vetted.

To make sure new drugs don’t cause these deadly side effects, scientists have built a 3D model of the human heart. Composed of 22 million “cells,” the model simulates the heart’s activity from the molecular level to the organ level–from the ion channels in cell membranes, for example, to the muscle contractions that pump blood. The system could help scientists predict whether new drugs will cause irregular heartbeats. Currently that kind of testing is done in animal studies, which don’t always reflect how a drug will act in humans, as well as clinical trials, which could potentially put participants at risk. The model’s creators think that it could one day make testing drugs cheaper, faster, and more effective.

But before the heart simulation can be trusted to test new drugs, scientists have to make sure it works on old drugs. In a paper in Science Advances, researchers from the University of Tokyo successfully modeled the effects of 12 drugs on the digital heartbeat.

First, the researchers tested to see how each drug changed the activity of six different kinds of ion channels in hamster cells in a petri dish. These ion channels help control the electrical charge that cause the heart to beat–or not. The researchers plugged the ion channel data into the model and watched to see how it affected the simulation’s heartbeat at various doses of the drug.

“The real novelty of this work is that it mechanistically links drug action down at the molecular scale, all the way to dangerous changes in electrical propagation at the whole heart scale,” says Gary Mirams, an Oxford University computational biologist who was not involved in the research.

Using a souped-up computer, it took the researchers three hours to simulate each heart beat. Because it took so long, they could only simulate five heartbeats per test in most cases.

There are other limitations as well. The paper notes that the simulation still needs a tissue component, as it cannot reproduce the effects on ion channels that weren’t evaluated in living cells first. Instead, the model puts the tissue data together to see how it will fit into the big picture of affecting your heartbeat. Also, Mirams points out that the shape of the heart varies greatly from individual to individual, and that cells in different regions of the heart can have different electrical properties. Incorporating more details like these could make the model more accurate over time.

The simulation will no doubt come in handy for studying other types of heart problems, too. “Although not shown in this paper, our model can reproduce every aspect of the heart’s activity,” says Jun-ichi Okada, the lead author on the study. “We can evaluate pumping function, metabolism, and coronary flow as well.”

To learn more about how the model works and what it can be used for, check out the video below.