Scientists Use A Virus To Reconstruct The Heart’s Own Pacemaker

Doctors used a virus to give guinea pigs a gene that re-started their hearts rhythm section. 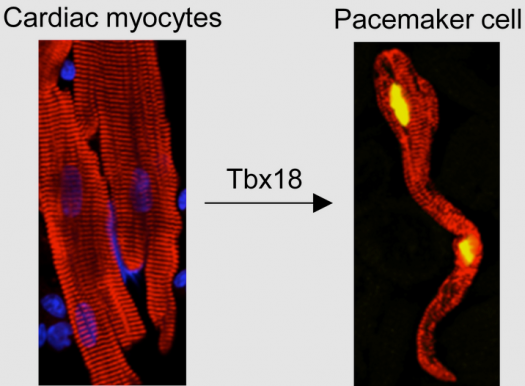 A slight genetic tweak can restart the heart’s own innate pacemaker system, according to new research. Someday, newly jumpstarted internal pacemakers could eliminate the need for electrical implants.

In the past couple of years, scientists have figured out how to turn non-beating heart cells into the type that beat, which are called cardiomyocytes. But these cells still have to beat to a specific rhythm, which is controlled by a tiny cluster of about 10,000 cells called the sinoatrial node. When this heart drum major fails, the billions of cardiomyocytes it leads will stop beating properly, leading to an uneven heartbeat or even cardiac arrest. Electronic pacemakers prevent this from happening.

But researchers at the Cedars-Sinai Heart Institute had another idea. They knew a gene called Tbx18 is normally activated during the sinoatrial node’s development, when an embryo is forming. So they set out to add Tbx18 into a functioning, fully grown heart. To do it, they inserted the code for this gene into a virus, which they then inserted into the hearts of guinea pigs. The infected hearts beat according to this newly formed pacemaker, Eduardo Marbán and colleagues report in Nature Biotechnology. It also worked in a Petri dish.

The team used ventricular cells, one of three main types of heart cells (along with pacemaker cells and atrial cells). The infected cells changed their appearance, taking on a distinctive tapered shape, and this lasts even after the Tbx18 has faded away. That suggests it’s a permanent structural change, which means this could be a lasting treatment for diminished sinoatrial cells.

“This technology thus represents a promising alternative to electronic pacing devices,” Marbán et al. write. Longer-term experiments are still needed, but the work so far is promising, they say.

Security experts have shown it’s possible for hackers to remotely assume control of a pacemaker, forcing it to deliver a deadly shock or just shut down. While this is not likely, it’s already been used for the most bizarre fake terrorist attack ever, the secret/unclaimed pacemaker failure and subsequent death of Vice President William Walden on “Homeland.” So, you know, it’s not totally crazy. Next time maybe it’ll be a virus instead.