So they think they can dance? Three robots bust a move to try to win your vote, and be crowned Best Robotic Dancer 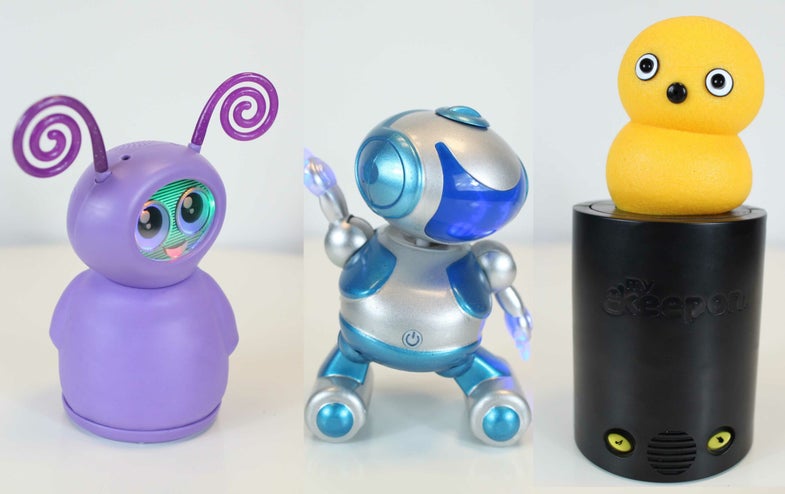 We may still be a long way from fully-functioning robot maids or dog-walkers, but there’s one thing consumer robot-makers have figured out: how to make ’em dance. This year, three music-responsive ‘bots will be on sale, leaving us to wonder: who’s got the best moves? So we gathered up the three contestants and blasted some “Robot Rock.” We’ll leave it to you to decide who rocks out the best.

BeatBots MyKeepon (yellow corner) He trained to dance at Carnegie Mellon University, and is most famed for his rendition of Spoon’s “I Turn My Camera On.” MyKeepon prefers to dance perched atop his own black podium as he bops. In his free time, he works as a therapeutic tool for children with autism.

Mattel Fijit Friend Willa (purple corner) Representing her entire Fijit Friend team, of which there are four, Willa moves, twirls and headbangs to any music you like — all without the benefit of arms or legs. If you can’t pick a song, she offers to sing her own, though we wouldn’t recommend it.

Tosy DiscoRobo (blue corner) DiscoRobo traveled from Vietnam to compete in the dance-off, confident he could best his competitors with his own brand of pop-and-lock moves — not to mention articulating arms, moving legs, and wheels. We’ll just have to see…

Cast your vote before midnight on February 22: