Text Messages Could Include Your Animated Face, Looking Frustrated

Researchers are solving the biggest problem in 21st century communication: What kind of emotion is that text supposed to express? 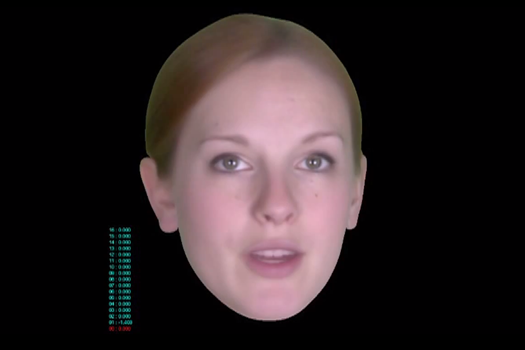 The scourge of 21st century socializing is that text messages have approximately the same emotional capacity as a brick wall, and emoticons make you look like an overzealous 7th grader. When you say you’re “fine,” does that mean you’re chipper or a little bit pissed off?

The solution: Send messages containing an avatar of yourself reading your text, set to the appropriate emotional register. Engineers at the University of Cambridge and Toshiba’s Camridge Research Lab have created Zoe, a virtual talking head that can display a range of emotions and change its voice appropriately.

They used the face of British soap actress Zoe Lister, but one day you could upload your own face and voice to make your digital assistant look and talk just like you. It could also be used to help deaf or autistic children learn to lip read and read emotions.

Zoe has six basic emotions — happy, sad, tender, angry, afraid and neutral — that can be set at different levels. The pitch, speed and depth of the voice can also be adjusted to the user’s preferences. The program that runs Zoe is only requires a few megabytes of storage, so it could easily run on a tablet or smartphone.

From the University of Cambridge statement:

By combining these levels, it becomes possible to pre-set or create almost infinite emotional combinations. For instance, combining happiness with tenderness and slightly increasing the speed and depth of the voice makes it sound friendly and welcoming. A combination of speed, anger and fear makes Zoe sound as if she is panicking. This allows for a level of emotional subtlety which, the designers say, has not been possible in other avatars like Zoe until now.

When the researchers tested how well volunteers could identify Zoe’s emotions based on both audio and video, the avatar’s success rate (77 percent) scored higher than the actual actress (73 percent).

The talking head still has a tinge of the robotic to her voice, but in terms of expressing realistic human emotion, she’s less creepy than FACE, the non-talking humanoid robot head that mimics human facial expressions, but maybe not as polite as the Actroid’s new social robot. In terms of being able to express yourself over the chasm of digital distance, it’s probably also a little more useful than a virtual hug. Think about it: Wouldn’t Siri be better if she yelled at you in your own voice?