New generations of bio-inspired robots will be more than just inspired by nature — they may use actual biological components.... 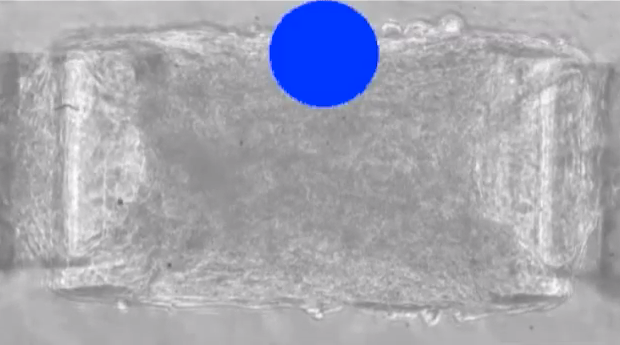 New generations of bio-inspired robots will be more than just inspired by nature — they may use actual biological components. Bioengineers at MIT have genetically modified muscle cells to respond to light, which could be used to make easily controllable robot muscles that look and act like the animals on which they’re based.

This is the first time tough, powerful skeletal muscle has been modified to react to light. Optogenetics researchers have done it with cardiac cells, which are already primed to beat on their own — now skeletal muscle, which normally requires some outside stimulus, can contract and expand at the command of light bursts. Harry Asada, an engineering professor at MIT, said it’s more effective and less bulky than stimulating muscle with electrodes, especially for a robotics system where light weight and mobility are key.

Optogenetics entails introducing new genes into cells that make them react to a pulse of light, usually short bursts of laser light. Asada’s team worked with myoblasts, cultures of skeletal muscle cells, to express a light-activated protein. They combined several myoblasts into long muscle fibers and exposed them to 20-millisecond pulses of blue light. In the video below, the blue dot represents the pulses, and you can see the fibers contract in response. A targeted burst of light makes one fiber contract, while a more diffuse beam can make the whole sheet move.

What’s more, the engineered muscle is pretty tough — to test its force, the team attached strips of muscle fiber to two tiny flexible posts inside a microwell. As the fibers contract, they pul the posts together, allowing the researchers to calculate its force. This could even be used as an artificial muscle gym, flexing the fibers to keep them in top shape.

The goal is to use strips of engineered muscle fibers to build flexible, realistic robots, which may swim inside the body’s blood vessels or run across a room. “With bio-inspired designs, biology is a metaphor, and robotics is the tool to make it happen,” Asada said. “With bio-integrated designs, biology provides the materials, not just the metaphor.”

Research on the optogenetic muscle will appear in the journal Lab on a Chip.