Hurricanes unburied the ship's remains, so NOAA and partners decided to make a sonar map before the sand consumes it again. 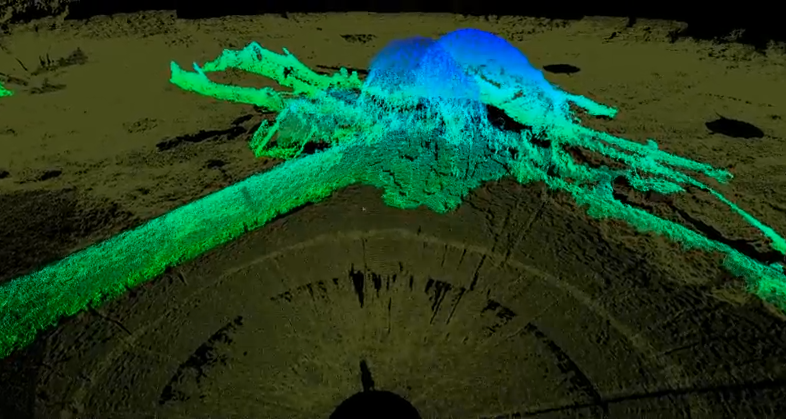 One hundred and fifty years ago last week, the ironsided Union battleship USS Hatteras was embroiled in a blazing gun battle with the Confederate raider CSS Alabama. Cannon fire severed steam lines in the engine room, scalding the crew. Fires broke out around the ship, which quickly started to take on water. Thirteen minutes in, its hull riddled with holes on the port side, the Hatteras capsized. The giant paddlewheel shaft groaned as it bent in the churning water, and the ship sank to the bottom of the Gulf of Mexico.

Its final resting place is about 57 feet below the water’s surface 20 miles off the coast of Galveston, Texas, in an area administered by the Bureau of Ocean Energy Management. The ship is protected by the Sunken Military Craft Act as a war grave. But it is not protected from the force of hurricanes, which recently removed some of the sediment that encased the Hatteras in its watery grave. With plenty of the shipwreck exposed, NOAA’s Office of National Marine Sanctuaries and several partners set out to make a 3-D map using sonar. The new state-of-the-art map was unveiled on the 150th anniversary of the ship’s sinking. 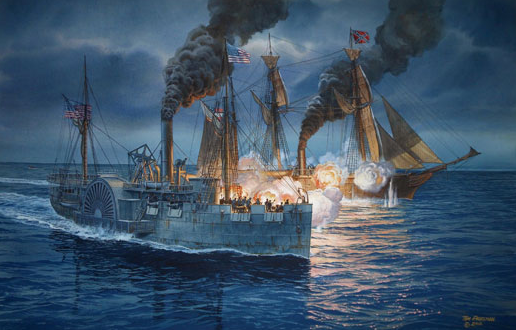 This is a new painting of the fatal clash between the USS Hatteras and CSS (Confederate) Alabama on Jan. 11, 1863.

Most shipwreck survey maps are made in two dimensions, James Delgado, director of maritime heritage for NOAA’s Office of National Marine Sanctuaries, said in a statement. Building a 3-D map instead lets researchers and the public virtually “swim” through the wreckage, revealing previously unknown details. Most of one paddlewheel apparently has survived, for instance, and the ship’s stern and rudder are both emerging from the sand.

Shifting sediments may very well bury the Hatteras again, which is what prompted NOAA to make the new map. During a two-day mission, researchers and military heritage workers used underwater sonar to pinpoint the ship’s location. Houston underwater photographer and journalist Jesse Cancelmo, who reported the sand moving off the wreck, inspired the mapping project. The team included the U.S. Navy’s History and Heritage Command, Tesla Offshore LLC, and Northwest Hydro Inc., which made the detailed maps.

The Hatteras was the only Union ship to sink in combat in the Gulf of Mexico during the Civil War. It was part of the 1863 West Gulf Blockading Squadron commanded by Union Rear Admiral David Farragut, according to NOAA. The squadron was trying to block the passage of supplies to and from the Confederacy, and Galveston was a key stronghold. You can see more of the maps here. 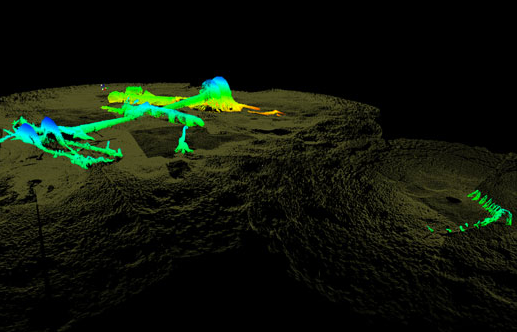 This 3-D image shows the left side of the USS Hatteras, which took the heaviest fire from the Confederate gunship that sunk it. More than half its hull is buried in seafloor sediment. The tooth-like outline to the right is the ship’s stern and rudder; to the left is the paddlewheel and engine.
battleships
civil war
navy
shipwrecks
sonar