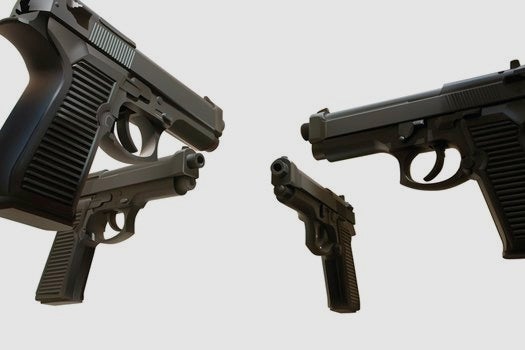 When it comes to guns, 3-D printing is usually seen as a harbinger of evil, not good. Last year, a plan to build open-source blueprints for a working 3-D printed firearm drew fierce criticism in a country plagued by shooting deaths.

But at least one group is banking on 3-D printing being an answer to, rather than a source of, America’s gun-safety problems. Following President Obama’s announcement yesterday asking for more private investment into gun safety technology, 3Dlt, a “3-D template marketplace,” has launched a crowd-funded innovation challenge to develop 3-D printed products that improve gun safety. 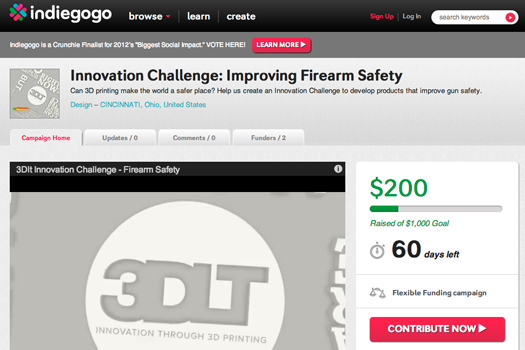 The Cincinnati-based startup 3Dlt is a platform for buying and selling 3-D printer templates, but it also envisions itself as a social innovator that can help improve the world, one 3-D printed object at a time. Using the crowd-funding platform Indiegogo, the startup launched its first big campaign yesterday: “Innovation Challenge: Improving Firearm Safety.”

With a $1,000 minimum goal to reach before March 18, 3Dlt will use the proceeds of its fundraising campaign to launch an innovation contest this spring. Designers will submit their ideas, which will be vetted by a team of firearms experts and later voted on by the general public. In June, the winning teams will receive a certain percentage of the total money raised, and their designs will be sold on 3Dlt.com, which is still in beta.

3Dlt tries to make it clear that their motivations aren’t political, declaring “WE ARE NOT TAKING A STANCE ON GUN OWNERSHIP.”

“Whether you support 2nd Amendment rights or think tougher gun legislation is the answer, we can all agree that gun safety is vitally important,” the project summary notes. Gun safety technologies, such as “smart guns” that only allow an authorized shooter to fire them, are relatively unavailable on the commercial market despite years of research and development poured into them since the late 90s.

As Robert Spitzer–a professor at SUNY Cortland and author of four books on control–told The New York Times last week, “The gun industry has no interest in making smart-guns. There is no incentive for them.” Gun manufacturers are concerned with liability, and gun advocates worry that technology would fail in a life-or-death situation.

However, 3Dlt’s challenge seems to be more about creating better gun accessories than smarter guns. 3Dlt is not looking for gun designs or gun enhancements, according to the Indiegogo description. The contest info instead suggests that gun locks, safety accessories and ammunition storage could all be designed to be 3-D printed and mass-produced.

The campaign hasn’t gotten many funders yet, but if the contest does materialize–and generates genuinely innovative ideas–safer firearms could be a click closer.