X-47B Takes Off From An Aircraft Carrier Today

It's a momentous occasion for the autonomous drone, sure, but remote-controlled airplanes have been making naval history for 86 years. 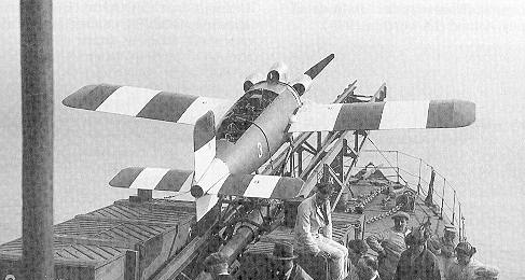 But this isn’t the first time as unmanned aircraft has taken off from a naval ship. Pictured above, the RAE Larynx was hardly the first drone, but it was still in the first generation. World War I saw several attempts at unmanned flying machines, the most successful of which was the Kittering Bug, a bomb-carrying biplane designed to fly a set distance and then crash to the ground. The RAE Larynx was made later, in the interwar years. It had the body of a single-wing fighter, and a powerful engine gave it a top speed of 200 mph, making it faster than contemporary fighters. Carrying an explosive payload and flying toward a target, it was less like a modern warplane and more like a cruise missile.

The Royal Navy tested RAE Larynxs for nine years. The first unsuccessful attempt to launch one from a ship took place July 20, 1927, and the first successful launch occurred September 1 that same year, though the plane was never recovered; the Royal Air Force believes the plane flew about 100 miles, before it got lost.

The British military canceled further development in 1936. The aircraft was inaccurate, had limited range, depended on ideal weather conditions, and was expensive.

None of these problems is expected to plague the X-47B–well except for the costliness (an estimated $813 million). Given that the X-47B has already successfully landed on aircraft carriers, it’s unlikely it will suffer the Larynx’s problem of getting lost after launch.

Amazing how much better technology gets in a century.