Talk To The Hand: A New Interface For Bionic Limbs

Light bridges the communication gap between man and machine. 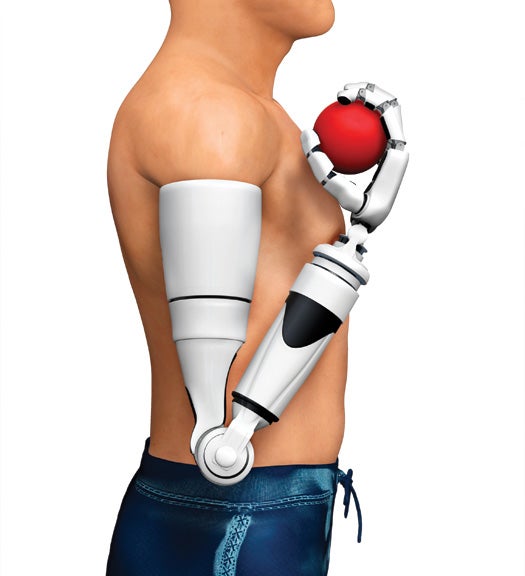 The Six Million Dollar Man’s robotic arm worked as seamlessly as his natural one. But in the real world, robotic limbs have limited motions and the user can’t feel what he or she is “touching.” a new approach using optical fibers implanted around nerves could transmit more data and let prosthetics speak to the brain.

Previously, scientists surgically connected electrodes to the nervous system, but they seemed to harm the body’s tissues, making the implant fail within months. In 2005, scientists discovered that they could stimulate a neuron to send a message by shining infrared light on it. Last September, DARPA, the Pentagon’s R&D branch, awarded $4 million to a project led by Southern Methodist University engineers to attempt to connect nerves to artificial limbs using fiber optics.

The team suspects that flexible glass or polymer fiber optics will be more flesh-friendly than rigid electrodes. In addition, optical fibers transmit several signals at once, carrying 10 times as much data as their electrical counterparts. “Our goal is to do for neural interfaces what fiber optics did for the telecom industry,” says electrical engineer Marc Christensen, who is leading the SMU group. Transmitting more information faster should give bionic limbs more lifelike movements.

This month, the team will implant optical fibers to stimulate a rat’s rear leg. If it works, Christensen says, in about a decade, robotic arms could be as graceful as Steve Austin’s six-million-dollar one. 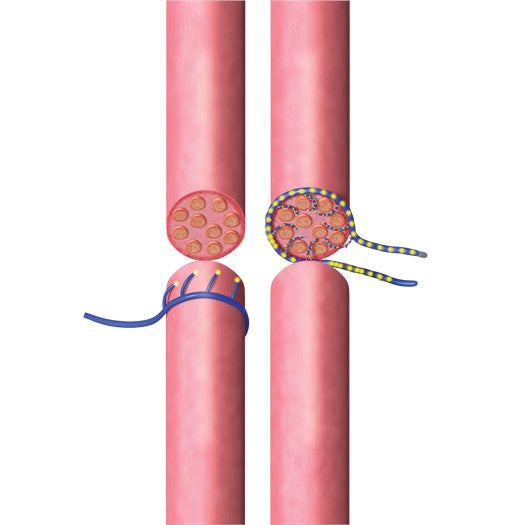 When someone’s prosthetic hand touches a ball, for example, it would trigger an optical fiber in the arm to pulse a pattern of infrared light like Morse code. These light messages stimulate a sensory nerve to fire in a similar pattern, instructing the brain that the hand is feeling a round object.

Thinking about squeezing the ball sends electrical impulses from the brain to a motor nerve. When it reaches the optical fiber implanted in the nerve, the signal deforms thousands of the fiber’s spheres. This changes the pattern of light in the fiber, which instructs the prosthetic hand to grip the ball.