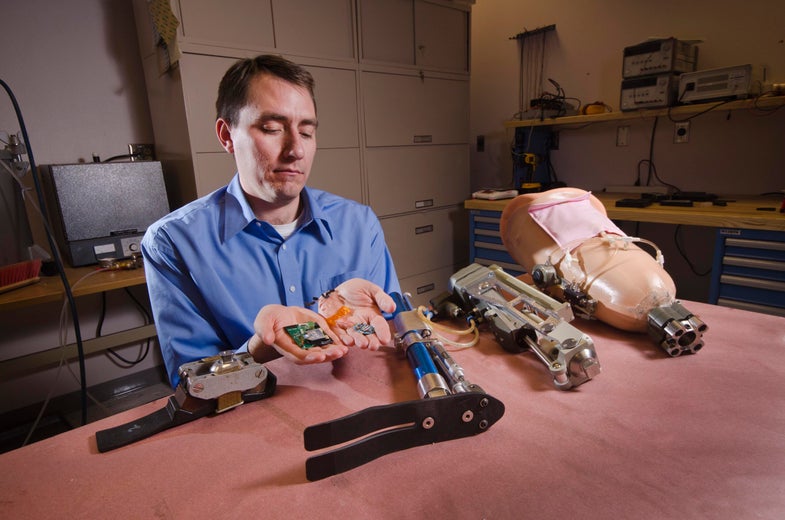 Despite major advances in prosthetics, researchers have not been able to fully integrate nerves and prosthetic devices — though several teams, including DARPA, have been trying. New research at Sandia National Laboratories, the University of New Mexico and MD Anderson Cancer Center in Houston could make it a reality.

Connecting mechanical instruments to human nerves is complex on several levels because the interface would need to share several special properties between man and machine. It would have to be biocompatible to promote nerve and tissue growth, but mechanically compatible to allow electrodes to connect to external circuits. It would have to be structured to avoid harming surrounding tissue, but it would have to work in concert with that tissue to serve as a real replacement limb.

New biocompatible interface scaffolds designed by Sandia researchers are a step in that direction. Scientists electrospun liquid polymers to create polymer chains, forming a fiber structure. Multi-walled carbon nanotubes incorporated into the fibers provides electrical conductivity. Using this method, the team created scaffolds with two types of polymer, according to Sandia — PBF, which was developed for tissue engineering, and PDMS, a sort of biocompatible caulk. PBF is biodegradable, so the scaffold would disintegrate once installed, leaving the electrical contacts behind. PDMS is not biodegradable.

The idea is that a scaffold would provide a connection between existing nerves and new electronics, containing enough pores to let new nerves grow. The newly innervated limb would then theoretically have the same sensory characteristics as a real one.

This type of transplant is still years away, but recent tests with lab rats show its promise, the Sandia news release says. Robotics engineer Steve Buerger, one of the research leads, said the team is pursuing external funding to continue the research, “so we can bring this technology closer to something that will help our wounded warriors, amputees and victims of peripheral nerve injury.”

The work was presented at a winter meeting of the Materials Research Society.