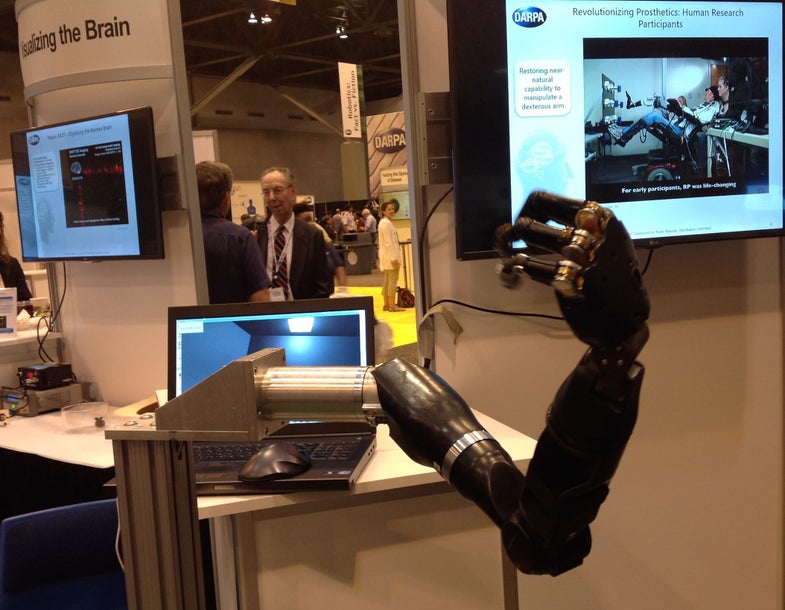 ST. LOUIS — By hard-wiring into the brains of people with traumatic injuries, scientists have been able to restore the feeling of touch and to improve memories, according to researchers at DARPA.

In one study, a 28-year-old man who was paralyzed more than a decade ago became the first person to “feel” physical touch through a prosthetic hand. The patient could already control the robotic hand through his thoughts, which other people have already done. But this was the first time anyone could feel through it, too.

In another breakthrough, volunteers who got electrical arrays implanted in their brains are seeing improvements in their memory, DARPA said. The project, called Restoring Active Memory (RAM), could help people suffering from traumatic brain injury. The Defense Department’s research wing shared both milestones last week at a conference called “Wait, What?”

Mind-controlled robot limbs have gotten incredibly sophisticated in the past few years, culminating in the FDA’s approval of a bionic arm developed with DARPA funding. The agency’s newest research department, the Biological Technologies Office, is trying to make them better, said program manager Justin Sanchez.

“Without feedback from signals traveling back to the brain, it can be difficult to achieve the level of control needed to perform precise movements,” he said.

In a study that’s still being peer-reviewed, DARPA engineers and scientists at Johns Hopkins University’s Applied Physics Laboratory first inserted electrodes into the patient’s motor cortex. This allowed him to control the hand with his thoughts. The hand contains sensors that can detect when pressure is being applied to its fingers, and converts this pressure into electrical signals that the brain implant reads. In a series of tests, the team touched each of the prosthetic hand’s fingers while the patient was blindfolded.

He was able to tell, almost 100 percent accurately, which finger was being touched.

“At one point, instead of pressing one finger, the team decided to press two without telling him,” Sanchez said in a statement. “He responded asking whether somebody was trying to play a trick on him. That is when we knew that the feelings he was perceiving through the robotic hand were near-natural.”

In another study, people who were undergoing brain surgery and volunteered to get electrode implants saw improvement in their scores on memory tests, DARPA said. They received small electrode arrays placed in brain regions involved in the formation of declarative memory, according to DARPA. That’s the type of memory we use to remember lists, as well as spatial memory, according to the agency.

Researchers were able to capture signals coming from the brain during the process of memory formation and recall. The goal is to improve memory by using targeted electrical stimulation, which could help people with memory problems — including those with traumatic brain injuries, Sanchez said.

“As the technology of these fully implantable devices improves, and as we learn more about how to stimulate the brain ever more precisely to achieve the most therapeutic effects, I believe we are going to gain a critical capacity to help our wounded warriors and others who today suffer from intractable neurological problems,” he said.