Video: A Marine With A Prosthetic Hand Controlled By His Own Muscles

Staff Sergeant James Sides lost his right arm in an IED explosion in Afghanistan. Now he's the first patient in an FDA trial testing an implantable, muscle-connected controller for prosthetics. SSgt. James Sides, left, talks with Dr. Paul Pasquina, principal investigator on a new implantable device that can control a prosthetic limb with an amputee’s own muscle.

Out on a routine reconnaissance mission in Afghanistan’s Helmand province, Marine Staff Sergeant James Sides reached out his right hand to grab the bomb. It was the ordnance disposal tech’s fifth deployment overseas, and his second to Afghanistan. But this time, July 15, 2012, the improvised explosive device detonated. Sides was blinded in his left eye and lost his right arm below the elbow.

After a long recovery at Walter Reed National Military Medical Center, Sides learned to use a prosthetic hand. Then 11 months later, he went back to the hospital — this time, for a surgical implant that could represent the future of prosthetics.

The implanted myoelectric sensors (IMES) in Sides’ right arm can read his muscles and bypass his mind, translating would-be movement into real movement. The IMES System, as its developers are calling it, could be the first implanted multi-channel controller for prosthetics. Sides is the first patient in an investigational device trial approved by the U.S. Food and Drug Administration.

“I have another hand now,” he says.

Inspired in large measure by veterans like Sides, many groups are working on smarter bionic limbs; you can read about some of them here. Touch Bionics makes a line of bionic hands and fingers that respond to a user’s muscle feedback, but they attach over the skin. DARPA’s Reliable Neural-Interface Technology (RE-NET) program bridges the gaps among nerves, muscles and the brain, allowing users to move prosthetics with their thoughts alone. This is promising technology, but it requires carefully re-innervating (re-wiring nerves) the residual muscles in a patient’s limb. The implant Sides received is simpler, and potentially easier for doctors and patients to adopt. The project is funded by the Alfred Mann Foundation for Scientific Research.

It uses the residual muscles in an amputee’s arm — which would normally control and command muscle movement down the hand — and picks up their signals with a half-dozen electrodes. The tiny platinum/iridium electrodes, about 0.66 inches long and a tenth of an inch wide, are embedded directly into the patient’s muscle. They are powered by magnetic induction, so there would be no need to swap batteries or plug them in — a crucial development in making them user-friendly, according to Dr. Paul Pasquina, principal investigator on the IMES system and former chief of orthopedics and rehabilitation at Walter Reed.

It translates muscle signals into hand action in less than 100 milliseconds. To Sides, it’s instantaneous: “I still close what I think is my hand,” he says. “I open my hand, and rotate it up and down; I close my fingers and the hand closes. It’s exactly as if I still had a hand. It’s pretty gnarly.”

In the video at the bottom, watch him take a swig of Red Bull, lift a heavy Dutch oven lid and sort tiny blocks into separate bins. 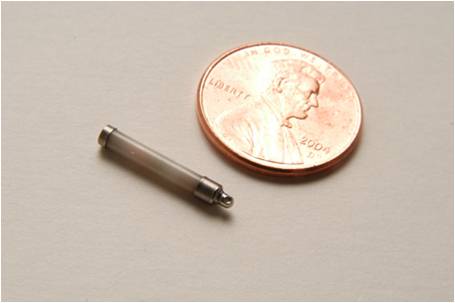 A new type of implantable myoelectric sensor can control a prosthetic limb by reading the user’s residual muscle movements.

While skin-connected smart prosthetics are more sophisticated than body-controlled, analog ones, they have two key drawbacks, according to Pasquina: Their limited range of motion and the skin barrier between the device and the muscle. Because myoelectric devices connect over the skin, the connection is inexact, which means patients have to learn to flex a different suite of muscles to properly activate the electrodes. “You have to reprogram your mind,” as Pasquina puts it. “We’re going after the muscles that are doing things they’ve been programmed to be able to do.”

What’s more, an external connection is easy to interrupt — reaching overhead, or getting wet, can dislodge the electrodes and render the prosthetic useless. Sides recalls sweating profusely one day while using his original on-the-skin myo-device.

“I would lose connectivity, and the hand would go berserk,” he says.

Maybe most importantly, external myoelectric devices can’t think seamlessly in three dimensions. For patients like Sides, that means moving the hand up or down or side to side. But when he wanted to move his thumb, he had to nudge it in the proper position using his left hand. Now, the device responds as if he was moving it himself in one fluid motion, he says. “It makes day-to-day life a lot easier.”

Right now, the system is designed for up to three simultaneous degrees of movement. Future systems will include up to 13 angles of motion and pre-programmed patterns, much like Touch Bionics’ i-Limb myoelectric hand. Pasquina said natural movement has been a major challenge for the DARPA project as well as his own research.

“We can create these arms, but how will the user control the arm, and integrate it as part of themselves?” he says. “It’s not just controlling an arm, it’s controlling my arm; ‘I want to control this and make it feel like it’s a part of me.’”

Someday, the sensors could be implanted immediately after a traumatic injury — right after an amputation and before a patient’s injury is even closed up. Further research will prove it can work in multiple people, Pasquina says. But that’s after several years of testing and trials monitored by the FDA.

“This is not a science experiment. This is something we want to influence the lives of our service members in a positive way,” he says.