We’ve been waiting on the prospect of a bionic eye for a while now; being able to surgically give sight... 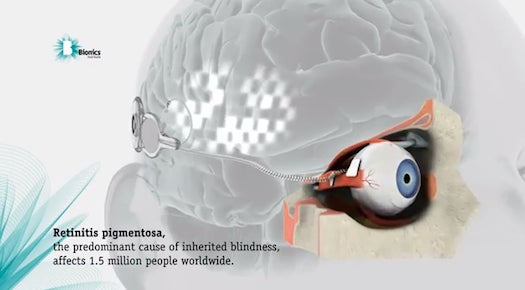 We’ve been waiting on the prospect of a bionic eye for a while now; being able to surgically give sight to the sightless would be a medical breakthrough, and we’re right on the cusp. Exhibit A: In a world first, scientists have successfully implanted a prototype bionic eye that has helped a woman see shapes.

Researchers from the government-funded consortium Bionic Vision Australia made the announcement in a statement yesterday; in it the implantee said she “didn’t know what to expect, but all of a sudden, I could see a little flash–it was amazing.” The team is hoping they can start to “build” shapes based on what she sees, eventually creating a bionic eye that works like its organic counterpart.

The prototype device is set up in a lab. Electrodes in the implant stimulate nerve cells, and in the controlled environment scientists can get feedback from the user on the “flashes of light.” That could help them adjust until the “flashes of light” reflect the actual environment enough to be helpful. It’s not full vision, but it’s an early step toward it.

The next stage, the scientists say, is incorporating an external camera into a device, and creating versions with more electrodes. With 98, a person could be able to see large objects; with 1,024, they could recognize faces and large print.