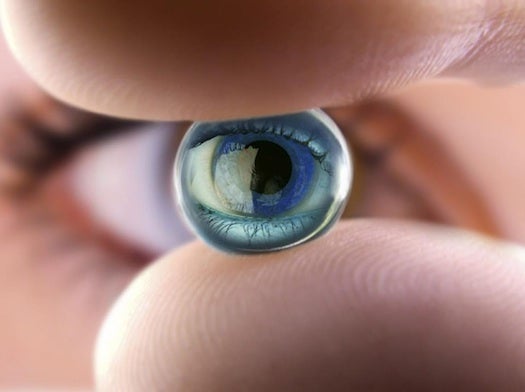 This morning, I was speaking with Brian Mech, the vice-president of the medical device company Second Sight, when his land-line rang. Mech had just been telling me about the fifteen years his company has spent developing the Argus II, a retinal prosthesis that restores partial sight to people with a degenerative eye disease called Retinitis pigmentosa (RP). It had been a long process, Mech said, but he can count on one hand the number of days he hasn’t woken up excited about the work ahead. And they were nearing the end–Europe approved the Argus II in 2011, and the FDA was expected to give the green light some time soon.

When his other line rang, Mech excused himself and set down the phone. I could hear a muffled version of his other conversation. After a few seconds, I heard “I gotta go,” and then he was back. “Emily,” he said, “I’m going to have to run: FDA approval just came through.”

And with that, the U.S. has its first bionic eye.

The Argus II works by substituting a small array of electrodes for the light-sensing cells that normally react to light by sending an electric signal toward the back of the retina. Those signals are relayed to the optic nerve behind the eye, and travel back along the nerve to the brain. In people with the genetic disease Retinitis pigmentosa, which affects about 100,000 people in the U.S. today, those light-sensing cells gradually stop working, resulting in total blindness.

In addition to the electrode array, which is implanted in the retina at the back of the eye, the Argus II system consists of a small video camera attached to a pair of eyeglasses and a visual processor the user carries around their waist. Data from the video camera is sent to the visual processor and then back to the glasses, where it is transmitted wirelessly to the embedded electrodes.

The system works for people with RP because the disease affects the light-sensing cells in the retina, but leaves the rest of the visual system–including the optic nerve, which carries visual signals from the retina to the brain–intact. The electrode array acts as a substitute for the eye’s photoreceptors by directly stimulating the retina’s remaining cells, which pass the signal on to the optic nerve.

Of course, an array of 60 electrodes cannot restore high-resolution vision–it’s like watching TV on a screen with just 60 pixels–but it can supply enough information to allow people to move around without aid.