Genuine language translation has been one of the Holy Grails of DARPA research for decades, as it would vastly simplify... 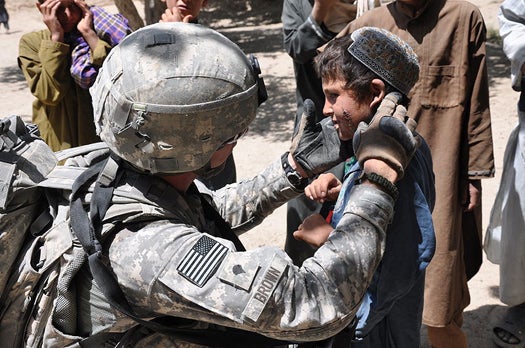 Genuine language translation has been one of the Holy Grails of DARPA research for decades, as it would vastly simplify military and humanitarian operations abroad and otherwise bridge the gaps between cultures made persistent by an inability to communicate. Now, rather than banking on some kind of handheld universal translator device (very Star Trek) DARPA wants an thinking robot that can interpret various languages and make decisions about what it hears (very Star Wars).

Or, as Danger Room puts it, DARPA wants a C-3PO. DARPA’s Broad Operational Language Translation (BOLT) program doesn’t necessarily seek a shiny gold humanoid, but it does ask for a ‘bot capable of both human-machine interaction and of enabling human-human interaction by acting as an intermediary interpreter.

The machine is also expected to be “genre-independent,” meaning it can translate language regardless of medium, be it causally spoken words, text messaging, email, etc. But its C-3PO-like qualities wouldn’t end there. What separates BOLT from handheld translators that have been tried before is the introduction of visual and tactile inputs that would “give them the ability to hypothesize and perform automated reasoning in the acquired language.”

As a benchmark for that kind of ability, DARPA wants would-be BOLT submissions to demonstrate the ability to recognize 250 objects and “understand the consequences (pre-state and post-state) of 100 actions so that it can execute complex commands with 90% completion rate.”

Basically DARPA doesn’t just want a translator, but a useful robotic assistant that doesn’t just take verbal cues but also accounts for visual and tactile stimuli as well. Such a robot wouldn’t just serve as a battlefield translator, but also a parser of complex information streams (like intel dumps gathered from a hard-drive or off the Web) in different languages and dialects.

Besides, who else on the battlefield can quickly figure the odds of successfully navigating an asteroid field?